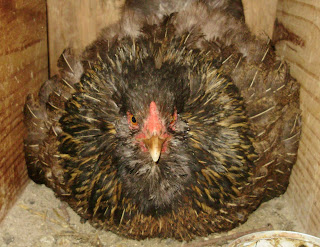 This is one angry chicken. Why the rage, baby?
You gotta admit - she's got the stink eye down to a science! Look at that hateful glare! And all I ever did was love her. Sheesh!

I really need to make a note that Baby Barnee and A Nameless Black Hen both sat down on nests the same day - on Tuesday the 7th. We should have lots of peeps on or about the 28th.

I'll tell you what - Baby Barnee is screwed down tight on that nest - she won't move at all. And she screams and growls if anyone comes near her. I had to put a little dish of water near her - especially with the heat - because she won't get up! She might sneak off the nest a little in the afternoon when the rest of the flock is doing its Late Afternoon Peck Around. But she hasn't budged at all.

The other hen - and wow do I need  a name for her - is in the most inconvenient place ever. Directly under my 12' compound mitre saw stand. I think its odd that they both sat on the same day - but I'm wondering if the full moon is close to their hatch date. It is the truth - the animals go by the moon and the stars.

Anyway, she's one of the nameless rabble.All I know about her is that she is one of Silver's sisters. Silver was beautiful and perfect and was killed by that stupid fox. This is her less interesting sister. who doesn't have a name - she's all black except for a creamish "collar. Any ideas? Most of my names tend to be descriptive - and I already have a hen named "Blackie." Unless I can come up with something better, she'll get a leg band (showing she gets a pass on butcher day for setting a nest) and be christened, "Not Silver" (which is pretty lame). Thoughts? 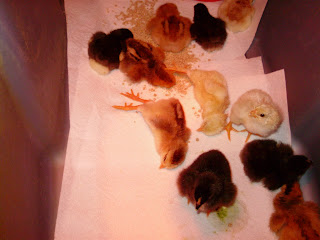 They don't tell you in the instructions that YES THEY SLEEP LIKE THAT! Ohmigosh that little one is just stretching her legs. She's fine. Aren't they cute? Funny little fuzz butts.
In other hatching news.... how adorable are these little guys? I moved them from the incubator to the brooder. At this writing (late on tuesday nite) we have 13 new little buddies. I'm not sure if Number 13 is going to make it. His "belly button" hasn't totally absorbed and I'm not sure if its intestine or really where he just connected to the yolk. Here's hoping he makes it for a perfect Bakers Dozen!

Happy Wednesday everyone!
Posted by Ohiofarmgirl at 5:46 AM

That's so funny how those little chicks sleep! I would have thought that they were dead. I'll get back to you if I think of a good name.

Madame Loisel after the main character in the story "The Necklace" - the collar is a necklace. :)

So we have one setty hen on a nest too. Unfortunately for her we have no roosters and she is sitting on a golf ball...I need to have a serious chat with her this morning.

Love the picture of the sprawled out chicks.:)

Lacey? Since she has a cream collar/lace around her neck?

The first time I saw my chicks sleep like that, I FREAKED OUT! I thought they were dead! lol. Live and learn. lol. Call the hen Inky or Smokey or Midnight, or Charcole, or......I could go on and on. heheheehehe

Our chicks freaked me out at first when they slept like that. Our turkeys are worse. They really look dead... Until they hear the food can rattle. Lol.

I vividly remember the first time I looked in the brooder and saw one sprawled out like that. I was contemplating whether I could perform CPR on a chicken and must have been making noise, because it woke up just before I decided to stick half its head in my mouth and start compressions. ;-)

Hi Robin! The first time I saw it i started yelling.. hee hee hee but I think I'd stretch my legs too if I was stuck in that egg.

Mr H. - you might try putting an ad on Craigslist for hatching eggs - she'd probably sit on them.

SFG, I think "Inky" might be the winner.. sounds like Stinky and that is how she is acting! But to her credit I had to use the saw yesterday and all she did was yell at me. She didn't move an inch.

Thanks Rae! I don't think 13 is going to make it. Ugh. His little belly is all messed up and I dont think it can be fixed. We had a turkey baby who had the same thing. Ugh!

J - the first time our first chicks tried to give themselves a dust bath, I thought she was having some kind of seizure. hee hee hee
;-)

haha i was allready worrying for you! Dead chicks is no good! ;-)

But happy that they are only napping!