We have a hatch, folks! Wow what a day! The incubator is going off like a Stir Crazy Popcorn Popper! 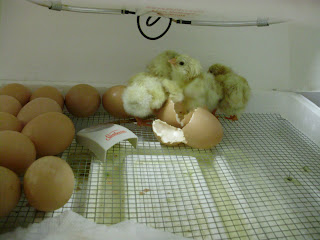 Yesterday we had some chicks bursting out of their shells like kung fu fighters. We had three new arrivals by last nite. And one little guy who was having technical difficulties escaping his pod.. I mean egg.

This morning I went down to check on our late comer and he hadnt made much progress getting out of his shell at all. And to make matters worse, the membrane that surrounds him was drying out....so he was kind of stuck.

The big question is - do you help or not? The old wisdom says that if chicks aren't strong enough to hatch, they probably won't make it anyway. In the natural this is probably true - but in the incubator? Our position is that we help. We figure they are gonna die anyway - so how could we make it worse? And we think everyone deserves a chance.

So this morning I used some cotton swaps dipped in water to moisten the membrane - and chipped off some of the shell to make sure this little guy could breathe. He was kicking pretty darn good so I didn't pip him all the way out. Its a tricky thing, you have to be careful you don't hurt a pipper.  The membrane has blood vessels so you have to be careful not to tear them - you sure don't want to cause him to bleed out.  And you have to make sure he's fully absorbed his yolk into his belly and removing the shell and membrane might harm this process also. So there's no sense in rushing. So just make sure he can breathe. Its hard work to pip out of your shell - so its OK if it takes a while and if he takes lots of naps. 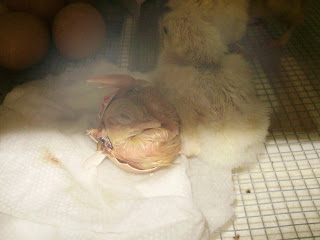 I laid him on a wet paper towel in the brooder once I was sure he was all systems "Go" - then one of his little buddies came over and snuggled with him. This is one reason to keep just hatched chicks in the incubator. His fellow pippers will be stimulated by all the movement and peeping. So he'll encourage his friends to come on out and play.

The chicks that hatched yesterday will be moved over to the brooder with Little Baldy and his gang later today. There's no real rush and you want to make sure they are really dry and have their feet under them before taking them out of the incubator. Remember that the last thing they do is absorb their yolk which will provide the nourishment they need for a couple days. This is how hatcheries are able to ship chicks thru the mail, isn't that interesting? 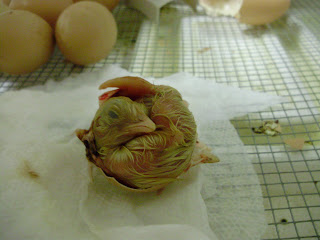 We'll keep this late arrival in the incubator with at least one buddy until tomorrow. While there is no guarantee he'll make it - we think he's got a fighting chance.

Happy Sunday everyone!
Posted by Ohiofarmgirl at 7:40 AM

Wow, those pictures are so cool! How exciting to be hatching chicks. I can't wait to find out if he made it out ok.

Glad you've got more chicks via the incubator! I lost sixteen of the seventeen that hatched last week to the extreme heat :( so I'll have to console myself with your fluffy chick pics!

I know what you mean about helping out the little guys; it's very tempting to just "crack 'em open" to help. But I would have (and actually have) done the same thing you have when the membrane dries around their faces. We're the ones incubating and brooding them, so what if we help out a teeny-tiny bit, right?

Good luck with your new brood!

Amazing, I'm pulling for the lil' one.

I would have helped too. :)

After chicks have dried out (after hatching) they sure are the cutest things!

I'm rooting for the little guy! I think he will make it ..he looks pretty strong already, that's Ginny's chicken :o)

Boy I have a lot to learn about chickens! (OK everything but I'll stick with chickens for now) Rooting for the little one.

I'm with you in helping. It's not like they're in natural conditions. I've only had two hatches so far and I helped on one and didn't on the second. I regretted. When I did the eggtopsy, I found that the turkey looked like it was too big to be able to maneuver in its pod...err shell. ;-)

I have two incubators going now and will help if needed. Please watch animal hoarders. I'm sure I'm going to be on there one day soon!

Erin - I think he's going to make it. Everyone was doing great this morning (monday).

Carolyn, these little guys send snuggles to you!

CC - hey baby! this is definitely your next project.. you've got to get a 'bator.

SFG - we really dont see any harm in helping and all the little ones we've pipped out have done great.

Hi Autumn! They're kinda ugly before they fluff out tho - yikes!

Dave - when you get your place, chickens need to be your first purchase. Or will you lead the charge and be a city-chicken owner? (no roosters, of course)

JJJ - you did an eggtopsy? WOW ok I can't bring myself it do that. Yay you! I'll bail you out if we see you on the news. ha!