Ham Slab on the Grill, Fencing, and Soil Sample

This is what we had for supper last nite - an enormous slab o' ham done up on the grill. 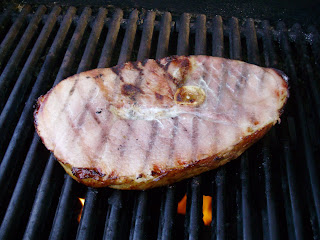 The pic doesnt do it justice - that slab was bigger than my head! And oh, the smokey goodness from being grilled - a summer delight for sure. And since we worked so hard yesterday, I made a quick and saucy mac 'n cheese with some maters and pesto. 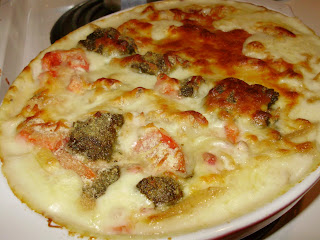 We spent all day yesterday clearing down by the pigz. We are going to run another line of fence and move Dahlia (Debbie's doeling from this spring) and Nibbles down to this new area during the day to do some bushwhacking for us.

And also because we figured out Debbie's milk production wasn't "strangely low."  Nope, Dahlia's been milk stealin' when we weren't looking. The good news is that Debbie isn't on her way to the ethnic market due to uselessness (just kidding)....the bad news is that we had to clear all day so we could run the fence.

Today we'll be finishing up - we'll probably need a few more tposts but then we'll be in business. Moving Dahlia and Nibs will either be our best idea yet - or will end in either hilarity.... or possibly tragedy. I'm pretty sure they'll be mad they are going to be fence-neighbors with the pigz. But we need to get Dahlia to stop nursing off Debbie and separating them is the best way to go. At nite we'll put everyone in the goat house but Dahlia will be in the stall, locked up tight.

Ideally we would not have the goats next to the pigz - but the area is pretty big and they should just stay away from the pig-stinkiness. But the new area is already fenced on 3 sides and has a hot wire (electric) set up. Remember when you are fencing - especially prey animals like goats - that, sure, fencing is for keeping your goats IN...but more importantly for keeping predators OUT. This new area is out of our line of sight and is in The Impenetrable Forest so we want to make sure the neighborhood dogs don't help themselves to our meat bags... I mean.... adorable little goaties.

Hands down the worst predator for your goats is the neighbors dog (or your dog). Don't fool yourself that just because your big doe stomped at your dog once that she can protect herself. Very few animals can defend themselves from a big (or medium) dog and almost no barnyard animal is safe from several dogs working together. Mr. Woofy-woof my be your best friend but he'll turn back to his wolf roots just as soon as he sees your lovely doe turn and run.

Anyway, my point is we are doing double duty on the new fencing and hopefully Nibs and Dahlia will do some clearing for us. If it doesn't work out we'll just turn the pigz into the new area and we'll work on taking down the trees in the lot they are in now. The pigz have grazed all of the green out of their current lot and are tilling it up beautifully. And yeah, I can't wait to send in the "before and after" pix to them boys at Hobby Farms who said animals can't clear land as effectively as chemicals.

In other news - I need to get into my notes that Friday the 12th I look a soil sample into our local Extension office for testing. The process was easy peasy. I took a clean bucket and a shovel out into our field, scraped off the vegetation, dug down a bit, and scooped up some dirt. I did this several places and just put it all in the bucket together. Then I mixed it up with a clean stainless, trowel...and away we went to town.

The folks at the Extension office gave me a bag - kinda like a coffee bean bag. I filled it to the appointed "fill line" and handed it back. $11 later I was on my way.  In about a week they will email me the results. I'm pretty sure the results will say "This is the Worst Soil in the County."

That's what is going on here. Hope everyone has a grill-happy Sunday! Now whatcha waitin' for? Go and get a big ham slab and grill it up, you won't be sorry.


Posted by Ohiofarmgirl at 8:07 AM

Where those pigs of yours root around will probably be the best soil in the county. Good luck with the move and hopfully your fence will stand up to all predators. I had to put up a double fence along my neighbors property line just to make sure his dogs would not get at our chickens.

Hey Mr. H! You said it - the hogs are doing a great job. I can't wait to get it planted next spring. Great work on the double fence - I'm thinking of doing a "dog moat" myself..but I'll run our dogs between the fences to patrol the property.
;-)

That slice of ham looks inviting! Is it from one of your stinking pigs? Bet it didn't taste stinky..bet you didn't even think stinky :o)

I was just reading "The Dirty Life" (great book by the way!!!) where she tells about how three neighborhood dogs viciously savaged and almost killed their fully-grown Jersey cow. Dogs are no joke.