Yesterday was so beautiful and the weather so mild that I let the meats out to see The Whole Wide World.... 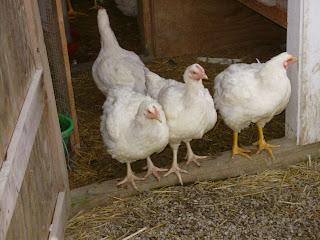 ...they were a little timid at first. But then they waddled and meat-ed all around.

This has been a weird batch. We finally figured out that some of yellow and some have white legs. We have no idea if this has to do with their weirdness. Mostly we've noticed they are mean. Nothing worse than mean meat for sure. 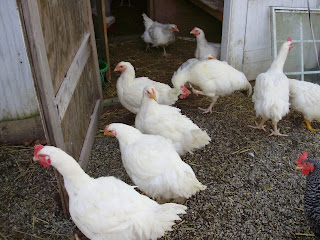 Some of the roo's have been particularly aggressive - which we really haven't seen before. Sure one or two of each batch have emerged as Lead Meat, but this is a kind of mean meat madness that defies all explanation.

Our winter meat project has gone really well. We've been keeping this batch in one side of the turkey house. When we had colder weather - and these meat chickens were younger - we kept a heat lamp on them. But now they are big enough to generate enough meat heat to keep themselves warm. As long as it isn't too muddy we'll let them out to free range. They thought the grass was something else.

Because of some schedule changes we haven't been able to have a big meat harvest like we've wanted to do this the last couple weeks. But that's OK. The meats are just creepin' along. Getting bigger and meatier as they grow.

I checked with the guy at Tractor Supply - around here they are gonna get their chicks in the end of February! Anyone gonna take the plunge and get some creepy meats for the first time? Now is your chance!  Last spring we really thought our "one batch, two batch" project worked really well. We got one batch of about 10 or 15 meats, then several weeks later got another similar sized batch. This way we could stagger the meat harvest and not use up all the freezer space.

Happy Saturday everyone! Its raining ice here - is everyone staying dry? Snow? Anyone out it Colorado still digging out?
Posted by Ohiofarmgirl at 10:40 AM

I'm sorely tempted to get chicks this year. That would force me to build a tight pen and housing that I can ill afford right now. (We have wild animals including coyotes I'd need to protect against, and keep a close eye on them when I let them out to free-range.)

Mean meat? Hmmm, now that puts an image in ones mind....giant white squishy chickens, waddling after me... They look great! We will be getting ours in a few weeks..25 at a time...hoping to get 2 spring batches, and 2 fall batches.

Keep working on me. Maybe I'll take the plunge. I really want to try Freedom Rangers too. I really need to get a freezer.

I find it hilarious that you just refer to them as meats!

I am finding that I have a difficult time imagining something that has a name, so you probably have the right idea. :)

We are planning on taking the plunge into raising meat birds this year... hopefully with some success!

You know, this is the first year that I also noticed that some of our creepy meats had different colored legs; some white some yellow. It wasn't based on sex either. Hmmmm.

We only grew out 25 meats this fall, normally we do 50 at once, once a year. But I figured 25 would be an easier number to butcher and we'd just grow another batch in spring. But now we'll have another 8 - 10 weeks of caring for the next 25 birds where if we did all 50 at once we'd only have to care for them one time.

Adding to the file... They look great and healthy

what is it with the leg color? The last batch we did had some white legged and some with yellow legs too. It really had us scratching our heads. The last batch from Meyers that we got was mean and really flighty. Never seen a meat bird fly like these did and when I went to catch them for processing they pecked the crap outta me!

I raised two batches from the same supplier last year. The spring ones were so meat-ie all they could do was eat, drink, and poop and then they had to sit down again. They processed out so well and the meat was so tender. The second batch seemed like a different type of chicken. They didn't "sit and eat" and were more aggressive. They were tough birds, too. I wasn't too happy about the second batch since I supplied the meat for Thanksgiving and had promised them the best chicken ever. It was so tough I had a Thanksgiving chicken FAIL.

The only thing I know about meats is what I've read from you, so if my info is correct (LOL) these will be some mighty tasty meats!!! Mean Roo Stew coming up!!!

I read Prairie Cat's comment and I'm with her on the naming thing. A long time ago I ready a study where they had people break a pencil. Then they gave them another pencil, had them give it a name and told them to break it. I forget the percentage, but I'm sure it was over half that couldn't break the 2nd pencil. People are strange critters.

So glad to find your blog! It looks like you have a great deal of useful information here!

Hi Darius! You might try freecycle or craigslist - you'd be surprised what you can get for free! Most of my projects are whacked together out of dumpster items. :-)

JJJ - Get some of each! TSC will have the meats and then order from FR's (or red broilers from Meyer's).

Its helps, PC, to must think about them as food from the start. Plus they arent very cute after the first week.

Caroline, the white vs yellow leg is just weird.... weird!

D, this is the best group so far - very few losses which is pretty amazing.

Lori - THESE are mean and flighty! They've even broken some of the heat lamps! Whats with that?

DOC - people are crazy, arent they? But um.. sometimes we name the worst rooster "First." And he is.

Hi Poppy! Welcome! Come on in and make yourself at home - feel free to ask questions or comment.
:-)