Has everyone been outside!?

WOW! What a "non-winter" we've been having these last couple days!  Today was the second day I was outside and in shorts! Pretty good for last day in "Jun-uary" and a fantastic first day of "Feb-uly." 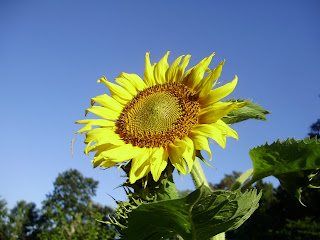 Ok it wasn't EXACTLY like June... there weren't any of these terrific sunflowers. But it was close.

We worked outside on The Big Bramble pile until it was almost too dark to see the The Bubby (Zander is mostly black and hard to see at night).  Of course the dogs have been loving being outside. Kai caught 2 rats in the woods while we were working yesterday. She was very proud of herself and I was totally creeped out. (ICK!).  She'll have the woods cleared of varmints in no time.

And its not just the dogs - the ducks and clucks and geese and everyone has been out roaming around. I know for sure my sweet little Pigpen aka Bianca aka Lady Gaga is laying so I'm also keeping and eye out for other duck's eggs. I can't wait to make a custard. Unfortunately for my little white duck...one of the ganders has taken a liking to her. They had her pinned down pretty good before I could run out and kick him off. She's safely in an enclosed yard now. Spring does funny things to the critters and as we know love is no respecter of species.

As for the goats, Nibbles has taken to standing in the yard and wailing. She's as big as a house and has started to make an udder. I think she has at least 2 babies - I don't think there are 3 but you never know. Dahlia is tried of me chasing her around feeling her up. I can't tell if she has a baby bump or not. But there seems to be a little something going on with her.

Debbie is the big question mark. Sometimes I look at her and think "yep she's got a baby in there" and other times I think this is gonna be her longer summer ever. I keep telling her "hay is for milkers" and she'll have to free range with the losers if she doesn't have any kids.  She hates me. If she doesn't have any babies then she might just find herself replaced by a cow. A sweet little Jersey girl who milks at least 3 gallons a day. And who won't give me any lip like these goats.

That's the doin's here. The rest of the week promises to be in the 50*'s and above freezing at nite. At this rate I'll have radishes sooner than later!

Is everyone outside enjoying the non-winter?  Happy Thursday!
Posted by Ohiofarmgirl at 6:30 AM

I hate having to guess if a goat is pregnant. Why can't they make an EPT for goats?!?!?!? It's not like it would be hard to get them to pee on it. I have one that is as big as a house and another that just looks a little fluffy. I've seen pics online of goats that looked like they were going to pop that ended up not even being pregnant. The suspense is killing me!!!! And we need milk. Oh well, I guess it will be easy to find a milker once kidding season is in full swing if we don't have one of our own. I would love to have a sweet little Jersey, or even better, a mini Jersey.

Yep, looks like Europe is getting all the snow this year. We have had average snow fall but it seems to melt almost as fast as it comes and the next few days are supposed to be full of sunshine....maybe all the ice will melt too, our property is like a giant skating rink right now. Hmm, trade your goat in for a cow, now that's the only farm critter you are missing.:)

Kai is a farm dog alright, get'n rid of the varmints. My boys murdered a possum last night. I think I've told you we have a point system. We are currently at dogs 12 - possums 3. That's six dead possums @ 2pts each for the dogs, then one dog injury (a minor wound for 1 pt), and a possum take over of our storage shed for 2pts. As for them goats, I don't have the patients to wait for veggies to ripen, much less a goat baby to be born. lol

Not much winter here either. snow is almost gone. I've not taken a turn through the yard but I suspect there are some things that may be confused.

Ha! Jeff I totally laughed about the EPT. I think you can send a blood draw somewhere to find out... sheesh! These goats! Oh to have a mini-jersey!

DOC, you are hilarious! I should implement a point system.. hee hee hee. Die possum die!

Hey Collieguy, I was wondering about the sap. We wanted this to be our year but I dont think that its gonna work. Tapping our trees is definitely on the menu tho. Let us know how it goes!