The Dog Moat is done!

The Dog Moat is done!  This is, by far, The Best Project EVER. 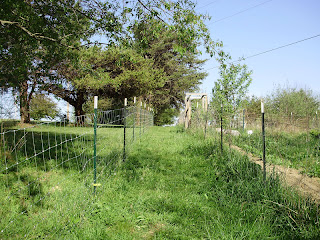 The other day we ran the fence along the post on the north side of our property. Altho I'm still totally mad that I had to spend so much money to fence out someone else dog (as opposed to fencing our dogs in)... I'm completely in love with this project.

The dog moat is about 200ft long and 8ish feet wide - it narrows a little as it get closer to the hen yard. This "fence within a fence" does not allow the dogs to go all the way to the road - we closed off the run so its in line with the edge of the upper garden. But this gives them a good dog run on part of the perimeter of our property. 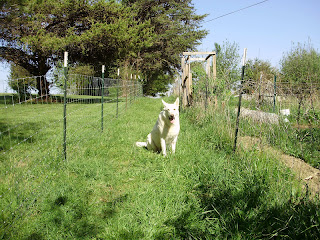 For the last couple days I've been spending a lot of time with the dogs in the moat - convincing them that this is the best place ever. Eventually they'll be happy to run around - or more likely sleep in the shade - while I work in the upper garden.  This solves a lot of problems - not only will they create a barrier to predators - but also I can have Zander contained so I don't have to keep chasing after him... as he's chasing after chickens. The hens free range so its easier to keep the dogs contained than the hens.... until we can get Zander to control his prey drive.  He'll be pretty rowdy thru the summer and sometime this fall he'll learn to behave. By this time next year he'll be working with me like Kai is learning to do.

Yesterday I had the great idea to lay in the grass with the dogs. I pictured a relaxing afternoon surrounded with big dogs sleeping all around me. Nope. Instead, I got slobbered on, stepped on, had my ear snuffed in, was the backstop for a wrestling match, had sticks dropped on me, was whacked in the face by wagging tails... the works. Actually it was pretty funny. Eventually the whole thing turned it to a wrestling match and I ended up laying on Zander. He was a big comfy pillow. We all had a great time in the new dog moat.

I'm going to try and get some planting done today - my hurt paw.. I mean... wrist.. is back on the mend.

Happy Friday everyone!!
Posted by Ohiofarmgirl at 8:46 AM

So glad your back to your keyboard!

That is a fantastic project! Looks great! Will you run the goats and/or pigs through there to mow it for you? Although the goats may turn their noses up because of the big dog tinkle. Although....that big dog tinkle will keep night predators out for sure! Great idea!

Looks great! We are planning to do the same thing with our wooded area. Mostly to keep people from sticking their hands through the fence to "pet the animals" Don't need a law suite from MY animals biting idiot kids who stick fingers in a fence. Congrats on a job well done!

Sounds like a great way to spend a day!

The dogs could practice driving the goat while they are in the moat for training!

Haha that sounds so familiar! i had this great idea too once with Jones but instead of lying comfortably besides my fluffy friend he did exactly the same thing!!!

Looking good! Sounds like an idyllic afternoon! Glad you are on the mend...

Hey Free! Yep the geese and goats will be sharing that space as well.

Thanks, HDA! Yep I've decided that a moat is the best idea for everything.

Little Kai is doing great with driving the goats - she just doesnt have any pockets to put the car keys... *snicker*

Hi Leo! Great to hear from you!! "Moat" is that dug out area around a castle filled with water and crocodiles to keep out the bad guys. ;-)

Thanks Dave, its gonna be too cold today to lay in the grass but maybe if I did they might snuggle me and keep me warm.

HHCottage - I totally boogered up your comment and lost it.. but THANKS!
:-)