I think gremlins got into my camera... not only did I loose it for most of this morning (why this post is late), but some of the pix from yesterday are missing. Unfortunately, instead of writing anything down I just take a picture of where I plant stuff . Zoikes! 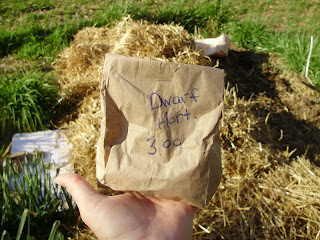 These are planted somewhere.....

I'll try and piece it together.

First I have to note that I planted some spinach beside the broccoli in the upper garden. Then I planted potatoes in the new garden by the drive. I've been working on developing this new area for 2 years - mostly its bad dirt we had to dig out from near the house, then we covered it with barn litter when we cleaned out the goat house, and last summer we just let it get weedy. Now its ready for action.

I planted short rows of potatoes along the side closest to the drive. Unfortunately.. the sacks with the variety names are laying out in the yard and I don't have the pix on the camera. I think the first ones were Irish somethings... maybe Irish Cobbler? The next rows were Pontiac but they weren't red so who knows what's going to happen.

Then I did a short row of "dwarf Horticulture" beans. We loved these last year and I was lucky to find them in bulk at a small feedstore in another town. A while ago an old timer told me not to plant beans until after the first week of June, but I gotta tell you, the weather is just begging me to get out there. So I am. The worst thing that will happen is it won't work and the beans will all die and I'll just till them under and start again. The best thing that will happen is that I'll get a stunning crop of beans and by early July I'll make a garlicy bean spread that will make your eyes pop out of your head. 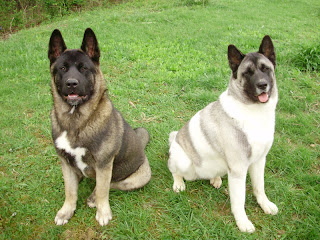 You can really see that Zander is as big...and maybe a touch bigger... than Kai.  At 7 months. Yikes!

Yesterday was also a banner day in Kai's young life. You'll remember that we've been working with her to help with chores. Last nite she did a fantastic job - all stars for such a new hard workin' farm dog. First she helped get the hens headed in the direction of the hen house, then she was totally calm when I was milking to goats. She even stood there and watched - she didn't try to harass the goats or chase them or anything. Then I sent Titan to break up a rooster brawl and to get that crew moving in and Kai went with him.

I was guiding her to get behind the roos and scoot them in - instead of using her hunting instinct which is to charge right at them, mirror their every move, then go for the kill. She did a great job but then BlackJack kinda freaked out at the wolves in his hen yard and started flapping and running..... right near Kai. Even tho she grabbed him by his tailfeathers as he ran past....she let go of him on command.

This is huge. Normally she would grab and shake her prey to kill it. Or use her paws to hold it down while she ripped it apart.. but instead she LET IT GO. On command. The FIRST command. I didn't have to run at her or do anything to break her prey drive... she just let him go. Amazing.

BlackJack ran for the hen house and refused to come out from behind one of the coops. He's fine.

So we are so proud of our girl - this was a huge victory to get her to work with the livestock. Knowing the difference between hunting/play and working is a big step and we are so glad!  Of course I was beaming with pride and Kai got all wiggly and shook her curly tail. So she got lots of kisses and 'good dogs' and some goat milk.

The more she "gets" that we are working the more chores we can give her.  And the more that I can trust her, the more that she will be willing to work, and the better helper she will become. I can't wait until I can tell her to "get down there and bring them those chickens" -- and she herds them up and drives them into the hen house... instead of bringing me one limp in her mouth.

Today promises to be another big planting day. I hope I can remember when I plant everything... Happy Tuesday everyone!!

You'll figure out what potatoes you planted when you dig them up! Just write the names down.

Greetings from a former Ohioan and Happy Tuesday to you! Kai sounds like an ultra smart dog - she sure picks up your signals fast. I would love to be able to get mine to 'help' more, but one has too much of a hunting instinct and the other is a couch potato. We work with what we have.

Ah the joys of management. Well done to both of you!

gotta love progress! That is wonderful!