Never say never, right? Remember when I was complaining about Dahlia and thought she wouldn't be staying. Sheesh. She's staying. She milks like a mutha and you should see her beautiful udder. In fact, look! 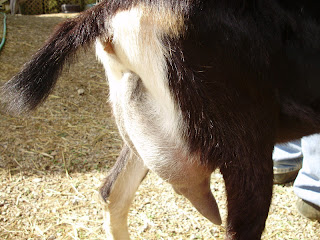 Hello Dahli! Would you look at the bag on that girl? And those teats! A milking dream machine..

Dahli is a "first freshener" - which means this is the first time she's produced milk. When dairy animals have babies and begin producing milk folks say that she has "freshened." Dahli always thinks she's fresh - and superfly. She's kinda full of herself.  I don't like it. She lacks discipline and I'm just the one to give it to her. 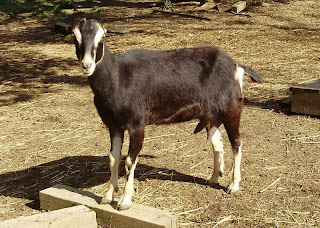 From what I've heard first fresheners are supposed to be hard to milk and don't produce a lot. No one told Dahli. We knew she was exceptionally well bred for milking, but wow! The next time she "freshenes" she's going to be outstanding and be as good a milker as Debbie, if not better. 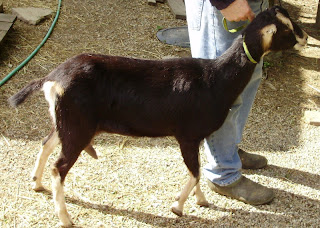 Dahli is just the right size. (The Big Man for Scale)

One of the things I really like about the La Mancha breed is that they are petite dairy goats. Well... not Sunny from last summer. That gal was a big as a yak. But for the most part they are a nice sized goat and are easy to handle. Generally they are pretty laid back. Dahli is still a little too bouncy for me - and a little too ridiculous. But because of her excellent milking achievements she's earned herself a good parking spot and an Employee of the Month certificate. Great job, Dahli - keep up the good work!

What about you - anybody else got a superstar in the making?

Happy Monday everyone! Now get out there and milk your fresh new goat!
Posted by Ohiofarmgirl at 6:30 AM

Gorgeous! What grips she has there! I have a couple of half La Mancha starlets, too. Both easy to milk and feisty sweetie-pies. Yes, I snuggle with my goatie-girls!

What a good girl!!! I think it is completely normal to take pics of teats and butts. Probably why I come here! ;) Good job, Dahli!

She's a beaut! I am hoping for a smaller version of a great udder next spring when my Nigerian freshens. I hope her attitude freshens, too. She's like a coiled spring right now. But, we're working on it and I'm waaay bigger than she is.

I have a nubian that is fresh for the first time. She is giving a great amount of milk. But her teat has a hole that is a "little off." lol

Nice job Dahlia! I just named our doeling Dahlia, so you caught my attention, LOL. Her mom, Blossom, a LaMancha Alpine cross is a second freshener and looks like she is going to be a superstar. Her babies are not even a week aold and I am getting an extra quart a day out of her, without even trying hard to milk her. I was originally just getting some extra colostrum to freeze, just in case. Then I decided to get some of her good milk to supplement Flower's babies. I hadn't even intended to get more than a cup or so. And I don't even have to put her on a stand. She lets me milk her anywhere, but it does help, if I put a bucket of goodies in front of her.

Her teats even point at a great angle. Our superstar,Esther, has teats that point towards her legs. I'm not complaining though. She gives us a gallon per day. I'm sure you'll whip her into shape.

Well I've seen it all now! Do goats get insulted or feel you are being sexist if you tell them they have nice teats?