I need to get a few things down for my record keeping.... 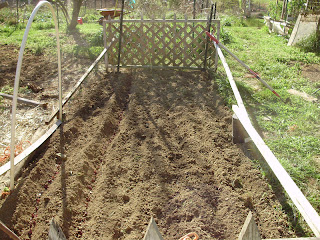 Garden:
* This bed has two rows of Yukon Gold, a row of livestock beets, and 2 rows of purple onions.
* Along the fence line on the north-east side are a row of Yukon Gold, and some random taters from the store that sprouted.
* I planted broccoli and cabbage starts on April 2.
* I planted a small patch of buckwheat - where the tomatoes will go - by the old apple trees. My idea is to let the buckwheat grow out until about mid-May, then till in, wait 2 weeks, then transplant tomatoes there. Need to remember to put some calcium there also.
* Moved the rhubarb from the hillside to under the maple in the front.
* We seeded the big hill on April 4 with grass seed. The chickens love it.
* Apple trees, catmint, and that weird invasive mint all blooming. Dogwoods have started to pop also. Dandelions also blooming - beez are happy!

Livestock:
* Turkey hens have been cooped up for the last 5 days - have 2 good eggs and darn they broke another. TurkZilla is in a rage at being separated from the ladies.
* Need to take up most of Cindy Lou Goose's nest lest we have about a billion baby geese (OFG's dream come true....)
* Hens are laying like mad, several of the ladies want to brood. Ducks are also laying like crazy.
* Debbie needs an attitude adjustment. She's all bossy and pushy because Nibs has become the #1 Goat. Debbie is dry as a bone so she doesn't get the royal treatment. Nothing but consternation in Goat-ville.

Dogs:
* Zander is as big as a dump truck and has a head as big as a bucket. We can't shake the nickname "BucketHead" - you know who you are.

Dog#1 has been on light duty for the last couple of days because he has a big cut on his paw pad. So Kai has been helping me with chores. She is doing a great job and she really wants that rat in the hen house. I want her to catch it. However, she needs some work on her herding skills. *insert mocking laughter here* (This is funny because, as a hunter, she has zero instinctive herding skills.)

Some folks have asked me how I get the dogs to work with me. Truthfully, I dunno.. its kinda hard to explain. So I thought I'd take some notes.

Two nights ago I had Kai come with me into the goat yard. Mostly she just wiggles around and looks for rats or moles. But I wanted her to help me get the out-of-their-minds-ridiculous goats into the hen house. Dahlia walked right up to Kai and started sniffing her. Kai looked at me, knowing that chasing, harassing, biting, or killing any of those meat bags is a serious offense. Dahlia and Debbie stood shoulder to shoulder with their ridges up.

I kept Kai behind me and gestured and told her to "stay back" and pointed where I wanted her to go. She shadowed me as I herded to the goats in. I kept saying, "lets get them in" so she knew what I was doing. There was a lot of goats running around but Kai did not break formation - even tho I could tell that she wanted to make a move for them.  It took a while but we eventually got the goats in.

Last nite the goats were even more out of their minds. (Note to self: I need a bad ass herd queen to get these girls in line. Previously it was Vita or Sunny...Debbie does not have good leadership qualities F- for her). So I went and got Titan.

Ti and Kai came into the goat yard with me. As predicted Dahlia skipped down to Kai to give her the business and all the goats got their ridges up. Zander screamed from the deck that he wanted to play too.

For over a year we've been teaching Kai to "leave it" and now we need to teach her when she can use her dog-ness to get the job done. To be sure, if I left her alone with those goats and when in the house I would come out later to find her standing over their dead bodies. This is careful work. We need her to use her hunting skills - to a  point - then stop and retreat. Now that we are confident that we can get her to stop... we need to ease her into "get it."

"Ti! Get those stupid goats in!" Said I, loudly and firmly and with some hand gestures indicating he should "go around" and "scoot them in."

Just so's ya know.. Titan doesn't waste time with nippin' at their heels. Then....

Nothing but the sound of goats hooves running as they made a beeline for their house. The enormous white dog trotted masterfully behind them. He was a vision.

Kai stood there slack jawed and buggy eyed. The "WHAT? We can DO that?!?!" Look on her face was priceless.

Tonite's chores should be quite a show.
Posted by Ohiofarmgirl at 10:05 AM

I went back and read the "grand poobah" post again. Bwahahaha! Sounds like MY idea of heaven. The four goslings we bought last year are now laying, and I'm fixing to get some more between the incubator and the nest that's currently planted underneath one of our Toulouse. If all goes well, we'll have upwards of 15 fluffy meepers. My guy is not so thrilled. Lol.

Love the "training" story! Poor Kai... Just can't wrap her brain around it. Lol. I'm sure she'll come around. Amazing how they'll pick things up (my dog has an addiction to pig chow, and quickly learned what "feed the pigs" means)

Yeah, it's the getting them to stop I always have roblems with.

Goats are all bluster and bluff, Titan has their measure.

thanks Rae! of course i thought about my big plans when they had the big superduperbillion lotto last week. drat! i cant believe i didnt win!

Hi Gina! you just gotta be relentless with the "stop" or "leave it." ugh!

You know it, CC, them goats are being called out for their foolishness. and its a full moon so there you have it.

Hi Dave! we've been trying to solve this problem... possible solutions have been:
1. make Nicholas man the camera
2. strap the camera to one of the dogs
3. get one of the National Geographic crews out here
;-)