I want to thank my pal over at 500 Dollar Tomato for posting the link to PBS's show, America Revealed - the Food Machine. She is just right, its worth the 53 minutes of your time. 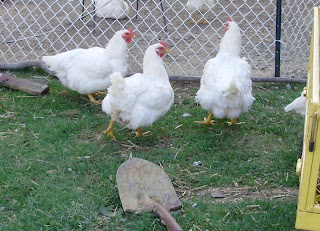 Prepare yourself. This post is about creepy meats as shown here, with shovel for scale.

One of the things I liked about the program was that it was balanced. Don't get me wrong, I love all the farm pirates and Food Renegades who rage on Big Food... but the hard fact is that we need to feed all these people who aren't growing their own food.  Someone has to do it and Big Food and Big Ag are getting the job done.  It is important to the security of our nation.

If you ask me, the number one security concern for this country is not a crazy man on a plane with a bomb in his panties....its that America is handing over the responsibility of feeding its citizens to someone else. Throughout history this has been a stupid mistake.  Do you know that your broccoli may be grown in China? So what happens when the folks who own all our money and grow all our food decide they don't want to play nice anymore? That is what keeps me up at night.

So I don't have a huge axe to grind with Big Food... they are doing their job. While I can't entirely throw my support behind them, I don't think they are entirely nefarious.  But I do think they are giving folks what they want - cheap, easy food that is readily available.

And nothing about it healthy or nutritious or entirely responsible.

The program especially highlighted just how many packaged, convenience products found in the grocery were made from corn in one form or another. Its everywhere. In thousands and thousands of products. Either as a sweetener or something else. I'm pretty sure you may not know how much of it you are eating. Or drinking as a sugary beverage.

I'm not sure its doing us any good.

Here's why. And before you scroll down.....I don't know anything about anything so don't quote me or sue me... I'm just gonna show you some pictures and you can draw your own conclusions. But first a disclaimer, these are pictures of guts and stuff so don't burst info flames. If you don't like it then don't look. But I've shown way more gross stuff than this. If you send me a mean email or comment I'll tell you to nut up and quit being a crybaby. Got it? Look here if you are on the fence.  Little Mo's cuteness will take the edge off.

Anyone still with me?

We butchered the rest of our creepy meats this week - there were six, huge, bowling ball shaped hens of epic proportion. To tell you the truth we didn't think one would make it to butcher day. That one was first. Mostly these birds have free ranged and been feed corn. Regular old corn. Kinda like all the corn that Americans tend to eat in their crap filled, out of the box, Standard American Diet. There is a reason its called SAD. 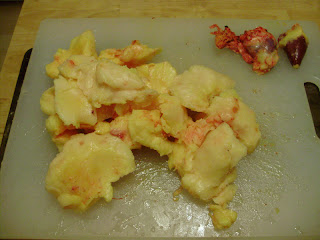 This was the result of a mostly corn diet. Most of these creepy meats were beyond all scale of creepiness and some were worse than others. My gut bucket was overflowing with fat. Tons of fat. An enormous amount of fat. Fat everywhere. Fat covering all the organs. Fat lining the carcass. Fat, fat, fat and more fat. 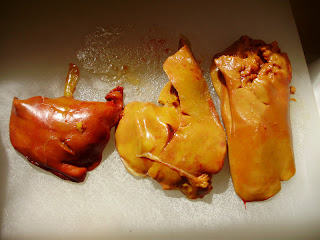 And the livers where huge. And not red and lovely.  Remember all those lovely livers from a while ago and there was one kinda weird one? That one couldn't hold a candle to this one which was about as big as my hand. 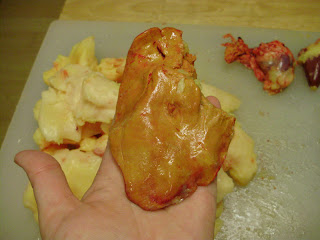 Can you believe it?  All that yellow stuff is the fat. Its not supposed to be like that. 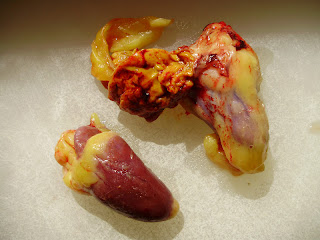 And then there were the hearts - covered in fat. Encased in fat. Bogged down by fat. 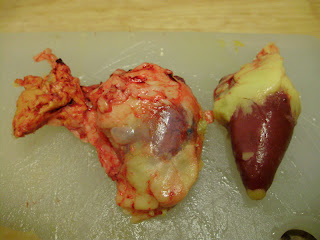 No wonder creepy meats just eventually keel over and die if they get too big or too old. Isn't it horrible?

Friends, you gotta look at these pictures and wonder if this happening to us since we are feeding ourselves a mostly corn-product diet.

Think about it - every time you crack open a soda, or bust open a bag of "Itos", or launch into some kind of microwaved-in-a-tray lunch kinda thing....what you are eating is a whole lot of corn products. It didn't do any good for these creepy meats but make them tender and delicious and covered in fat. Is that what the SAD is doing to everyone? Is the convenience worth it?

I dunno about you but I'm not eating that stuff. You don't have to either. For heavens sakes don't eat that, put down that box or pouch or tray or whatnot and pick up real food. Better yet, grow it yourself. Then make your own food. Real food.


If you've made it this far  be sure to check out that program on PBS. Then run right out and plant a garden and start making your own food from the ground up.

Happy Tuesday everyone - now put down that box of Toasted Sugar Coated Doodles and make yourself some oatmeal, or better yet - bacon that you grew in your yard and butchered yourself.

(You make me laugh...)"I don't know anything about anything" and "don't burst into flames".

Actually being a keen observer of the world around you makes you much smarter that the rest of us ostriches with our heads in the ground.

I have mixed feelings on this issue. With 4 acres of land, a spouse, and 4 kids to help out, we are able to raise a lot of our food. What about those who don't have land? Or the income to afford natural foods? I think part of the solution is to stop the outrageous corn subsidies that encourage food companies to raise meat on corn and put corn in everything. But figuring out how to subsidize healthier options is beyond me. Much easier to butcher my own chickens than figure that out!!!! Stevei@ruffledfeathersandspilledmilk.com

I've been slowly weaning my family off processed foods with my husband being the hardest to convert...I am going to show him these pics and hope they get through to him. It'll take something drastic to get him to stop his daily 2L of soda habit.

In the meantime...off to start more seedlings and find a place to house a batch of creepy meaties!!

Excellent thoughts, I look forward to watching the video with Mrs H.

So I'm reading a book called "Year of Plenty" about a family (they only live a couple miles from us) that is trying to get off the consumer merry go round and grow their own food and purchase from local farmers that which they do not grow.

One of the examples in the book related to a farmer who grows and sells squash to the community, many of his squash do not sell and at the end of the season they rot in bins (he shoud at least donate them to a foodbank). Anyway, down the street from that farmer is a grocery store that purchases subpar squash from Mexico...our system stinks. Broccoli from China...that stinks.

Those guts are a bit gruesome.:)

A little off topic, but I have a question... How old are your meaties when you butcher? We had two roosters keel over from heart failure (ok, so maybe a little on topic) last year. One at 7.5 weeks, and one at 9 weeks the day before we butchered. We had the same fat overload (gross), but man, they are tasty! We have them in a chicken tractor on grass from about 2wks or so until butcher, with broiler feed available during the day. We're aiming for 8 wks of age this year for butcher. Hoping to not lose any of the fatties this year.

Even people that don't have land can provide for themselves. During war time people raised chickens and quail in their bathrooms. Italians grew tomatoes on the tiniest balconies. Any american anywhere can grow some of their own food. There are no excuses. Any of us who have land can grow extra, just in case we will have to feed a few extra mouths. When there is a will there is always a way. People need only to exercise their will and not hand their health and well being over to some other entity.

Exactly why I raise Freedom Rangers (or Red Rangers, or French Reds, or whatever they're called). A lovely, foraging bird that grows pretty fast but does not grow into fat and mega-breasts with feathers.

Perhaps the results should be shown to all children and adults that are in the category of "Obese". Do you think it might make a difference?

I love that yu showed the pictures of what the heart and liver look like on a normal chicken compared to the creepy meat. The first time I butchered a creepy meat, I thought the bird was sick. I threw out the liver and the heart and cooked the bird up for the dog. Since then, I found that that is the way those poor meat birds look. Sad. Very sad. I least I know, that the ones I raise myself get sunshine, the ability to free range at least while they are stll mobile and lots of greens. They taste better too. I'll have to watch that PBS show with hubby and maybe even my adult daughter.

The Food Machine was the second episode from the America Revealed series we've watched and we're hooked. The host is informed but not biased and the footage is incredible. I can't wait to see more.

You make a very important point about Big Agra, without it many people throughout the world would starve. The seed revolution made life so much easier in India in the 1970's and has allowed their economy to take off.

Big Agra is important but it shouldn't be allowed to run the small farms out of existence.