That Second Pig Came to Dinner

After our stunning pork victory on Thursday and Friday we took Saturday off to goof around and rest up. I pretty much spent the day buried in hulu getting caught up on bad TV. So you can't imagine what happened when I went to take the dogs out to the Dog Yard. 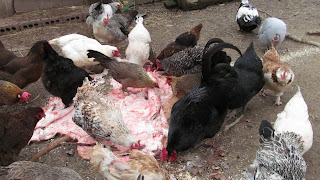 Hen swarm on a hog hide.. er.. from the First Pig.

The gate was open which was odd.  So with the four dogs trotting behind me I looked around to see if there were any errant chickens or ducks waiting to die needless deaths in the forbidden Dog Yard. Instead standing right there in front of me was.....

Oh glory... there it was. The Biggest Pig We've Ever Raised. I'd say we were equally surprised.

Apparently the Second Pig got out of the hog yard, tooled around in the woods for a while, then moseyed up the hill, and wandered into the Dog Yard. I think he was interested in their water bucket.

I slammed the gate closed. Then the dogs figured out what was what and thought it was the best thing they'd ever seen. Fresh from her first real hog killin' Kai got all "Well lookit what we got here!" and Zander peed in its general direction - then charged the fence.

I gathered up the dogs, ordered them up on the deck, locked them in, and then started yelling for my husband - just about that time the stupid pig walked thru the gate like it wasn't even there and started heading down the drive way. It was the damnedest thing I'd ever seen.

Luckily The Big Man rounded the corner just in time to get that pig's attention. He grabbed a bucket of corn and marched down the hill like it was feeding time. Pig2 merrily trotted down after TBM. With a little pushing and shoving we got the pig put back in the pasture, got the fence strung back up, and then turned the electric fence back on. Ooops! Guess we forgot to do that the other day.

But it sure did get us to thinkin' about that pig haulin' his own carcass up the hill....

Today (Monday) I have to work on parting that pig up but let's just say that the Second Pig came to dinner just fine.

Nothing better than a good hen clean up party! I say, let the pig haul it's own fat butt up the hill....LOL Seemed to work out well...save yourself a few steps...when the time comes. LOL

hi Kristen! actually bacon usually is meaner when its alive! but easily distracted with corn.
;-)

HDA - you have no idea how glad that pig hauled his own carcass up the hill.

Dave - its all part of a lovely cycle - the hens made the eggs which made the pig grow which fed the chickens ...

Yup! I'm reminded of harvest day in the novel Ghost Town Farm where they cannot budge those porks into their trailer to take them to the butcher... until they get the bright idea to put a crate of peaches in the trailer and have the greedy porks load their own durn selves! :)