Finally! One week and one day, two huge hogs, and hundreds of pounds of meat.... finally...March Meat Madness is over! 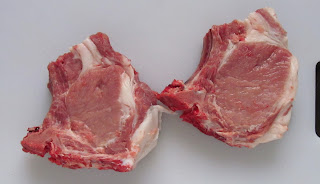 Chops. That's the way to get 'er done.

What a haul! Nope I didn't keep records this time but we had a huge, huge, huge, net busting, boat sinking, freezer busting haul. It's been all meat all the time. My kitchen is destroyed, every knife has been used, every kettle has earned it's keep, my meat saw needs a new blade...and there is not another plastic freezer bag to be found.

I still have a couple of buckets of lard to render and I found one more bucket of leavin's for the dogs...but mostly we are done. What a week!

A couple things we learned:

* By far these were our most expensive pigz. Our feed costs were off the charts due to the exceptionally high price of feed, the failure of Debbie the goat to produce any milk last summer, the shockingly hot summer that caused the hennies to stop laying, and the extra months that we kept those pigz around.
* Winter pigz are the worst. Chores sucked. Hauling water down the hill and constantly worrying if they were warm enough just wore us down. There wasn't enough for them to eat off pasture (once the weather turned) so we had to feed them everything they ate all winter. The mud was atrocious. Luckily they had plenty of dry ground but having a huge waterer down there and having to muck thru the mud everyday was just awful.
* We intentionally grew the pigz out extra big on purpose - but this was about at the top end of what we could handle alone. The carcasses were just too heavy even when they were gutted and skinned.  Both of the pigz were over 300lbs - probably 320 - 350lbs.

So was it worth it?

Oh heck yeah! Holy pork what a haul! And those chops! And the bacons! Just extraordinary. Plus, have you seen how expensive meat is in the store? We nearly fell right over the other day when we peeped into the meat cooler at the local grocery. Every time food prices go up it makes our work here all the more valuable. Even if our costs to raise the pigs were high - they aren't near as high as having to buy meat in the store. 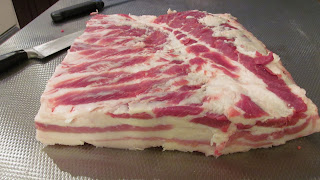 One of the smaller bacons.

So we stood there gawking at the expensive meat.....and then we burst out in hysterical laughter. I know I'm giving the meat guy a complex but we just think we are a scream standing there, slapping each other on the back, asking each other "Hey should we get some ham?" knowing full well that we had a freezer full of naturally raised meat at home.

Plus, I don't know if you've been keeping tabs on this story. But you have got to wonder what is going on..  You gotta wonder where your store-bought meat is coming from, right? Oh but wait they have those Country of Origin Labels, right? Ok well then you are good to go. Did anybody else see this and wonder what comingle muscle cuts means?  Of course, everyone plays by those food labeling rules, right? Anybody want some British "Everyday Value Beef Burgers?" Or you could always swing into IKEA and get some meatballs.  So I dunno... I think we'll just stick to the meat we know.

So after all this pork processing guess what we are having for dinner?

Ha! Happy Saturday everyone! Do you know where your meat comes from?

Posted by Ohiofarmgirl at 9:37 AM

Roslyn Phipps (A Plow And A Mule) said...

Chops are lovely. Ya'll are not the only ones that look in the grocer's meat case and say do you think we need any pork?, we do it all the time. By the way what breed of pigs do you raise?

One of these days....I will find someone to help me process at home. We too raised a winter pig. I agree...the WORST decision we have ever made. It wore me out!! I already have our little bacon bits for this year....got em early..we have 2 does in milk. YAY! And, pastures are greening up, even tho we are supposed to get a winter storm tomorrow. UGH! They are tucked in the barn, safe and warm, until the ground is for SURE going to stay...well...muddy. LOL What a great feeling knowing your next dinner is safe to eat, because you KNOW what it ate and how it was processed.

So happy for you that you got all this work done. Those pieces of meat sure look great. Your good for about a year or more, just make sure that the meats is vacuum packed.

Great work! That is one beautiful belly.

thanks Roslyn! these hogs were Tamworths - we just love them. but we've raised crosses and blue butts before.

HDA - i just know there is someone in your church who would love to help you. you could totally do this!

thanks Horst! yep glad to get this done - and yep its about a years worth of meat. yay!

Nice meat! Do you ever get sick of pork?