How low did she go????? 27* this morning at least. Yikes! Yesterday I brought in most of the trays of seedlings that were still outside. I'm hoping for the best for the rest of the greenhouse. Of course, now we are out of the danger zone and I have to carry all these trays back upstairs and outside. I'm thinking of it as an opportunity for better organization. 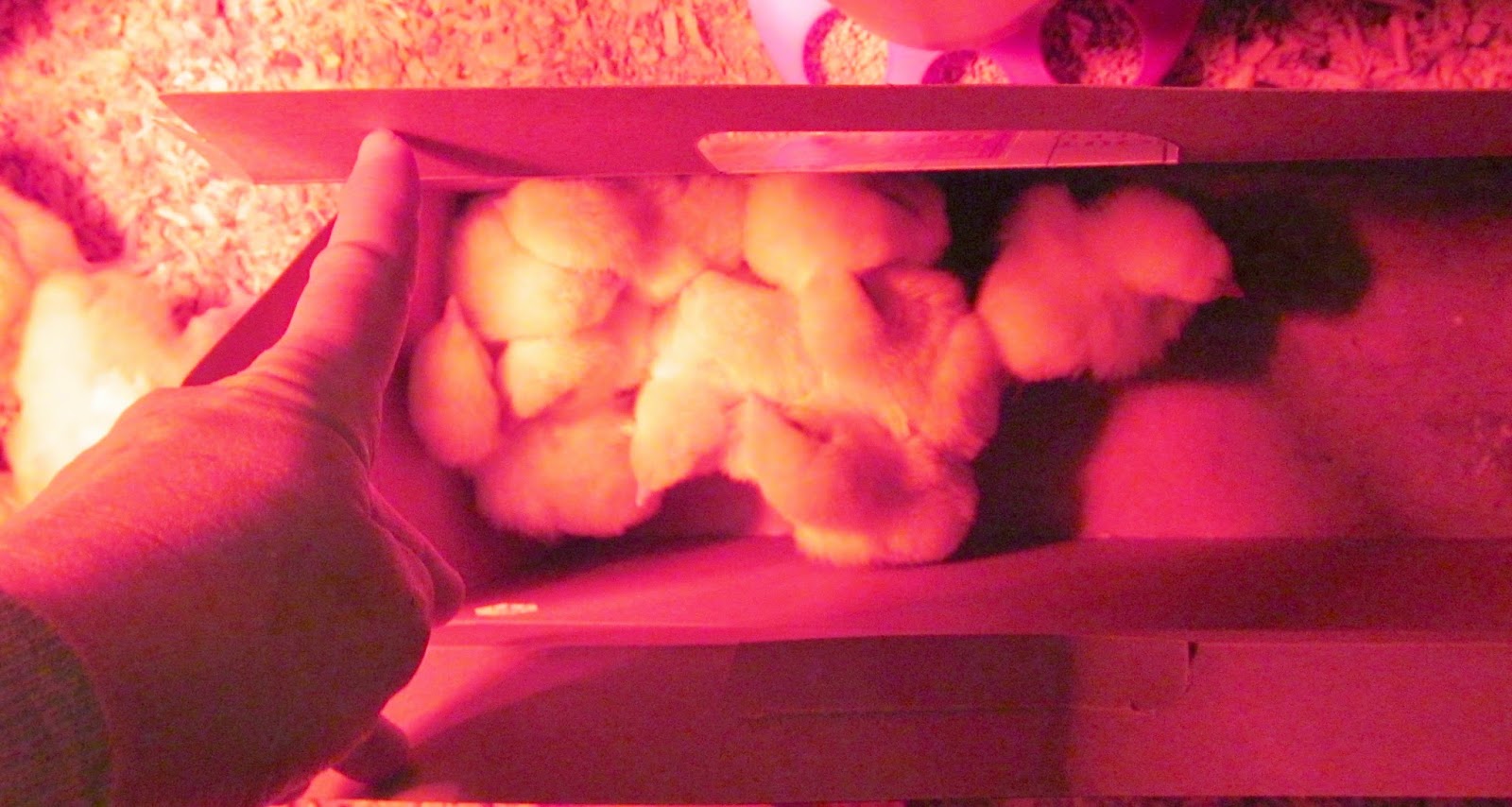 The new box of little buddies.

But the big news is that TSC has their chicks on sale! Quick! Run right down and get yourself a deal. We couldn't resist so we got 10 more meat chicks for $1.49 each! What a great price and no shipping. I asked them for an even BETTER deal... but no dice. It never hurts to ask.

About this time the TSC employees are really tired of the incessant peeping so I'm hoping they might be willing to go even lower on their price. We'll see what happens. 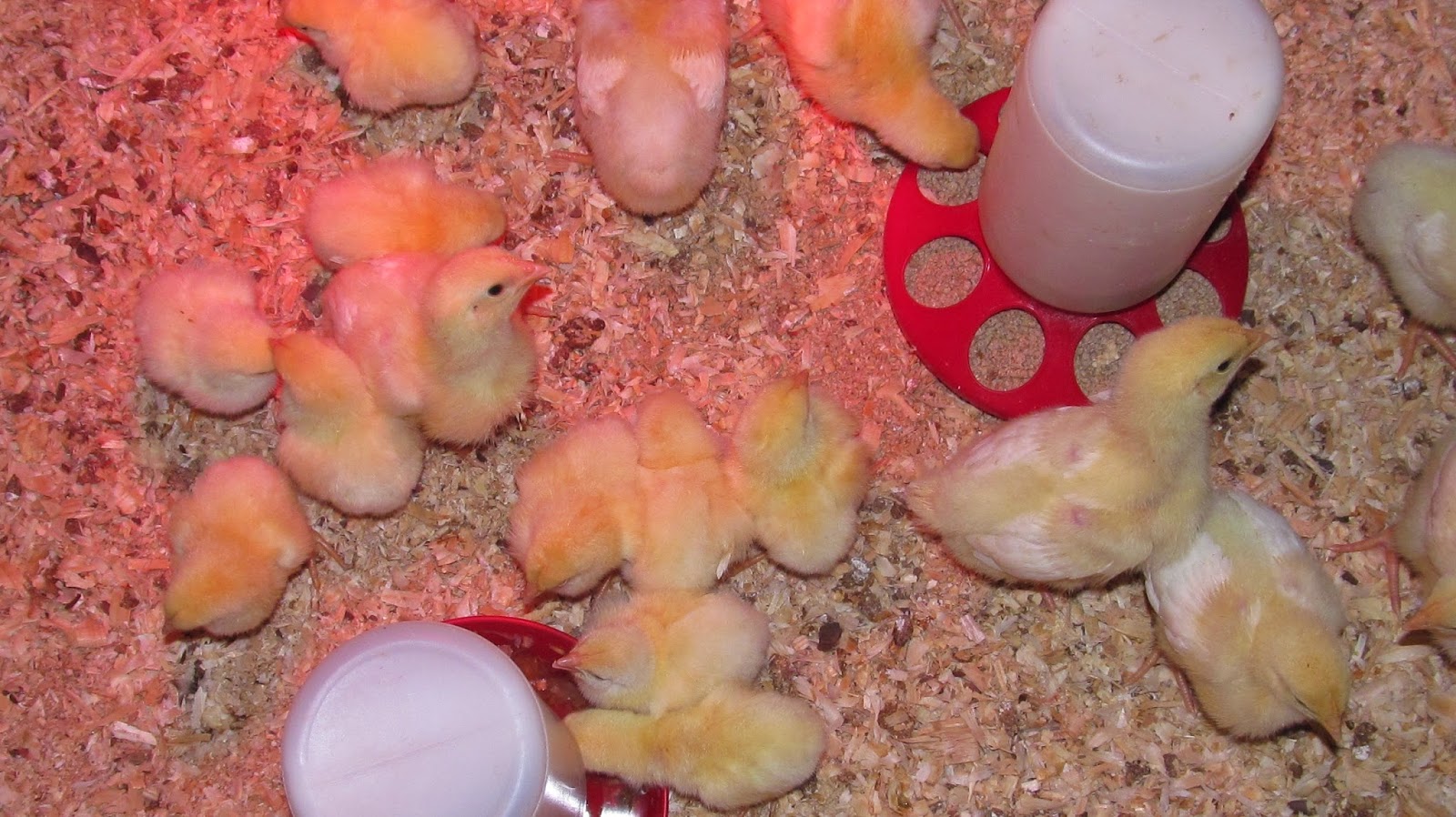 The 2nd batch are showing the newest chicks how to chicken.

If you are keeping track we need to get another bag of chick starter - my hubs will bring one home today after work. That will be a total of 4 bags at $15 each. For everyone wondering if it's "worth it" to raise your own chickens.... yes... yes it is. Good luck, suckers. This story is both heart breaking and scary.

Our total count is 10 first batch meats, 5 barred rocks, 10 second meat batch,  5 Buff Orpingtons, 1 weird, sad story one that could be a roo, and now 10 more for the 3rd batch meats. When you look at it all written down it kind of... looks worse than it sounds... hum... That's a lot of chickens. Yay!

I'll have to get some pix of the first batch meats so you can see how big they are. Still holding off on butchering as they are not big enough for us. They are just over six weeks old. Many people butcher at 7 weeks but we usually do not.

Won't they flop over dead? Not necessarily. Remember we've had meat hens live long enough to actually lay eggs! So we aren't worried about creepy meat heart attacks just yet.

However I am very very hungry for chicken. I mighta been inspired to go back up to Mrs. Yoders after I saw this article and that they were voted one of America's Top 12 buffets. And yeah, I put the hurt on that buffet real good... so much chicken. But more on that later.

I need to get to work on hauling all my seedling flats out of the basement and work on being better organized outside.

Happy Friday everyone! Did you run right down to the chick sale? Or were you too worried about the freeze last nite?

Now that kidding season is officially over, I can clean out the kidding pens and use them as brooders now. So yes. If I see any "Chick Sale" signs up at our local feed store, I'm squealing tires and making a b-line to the chick aisle.

So sad our TSC did not get Cornish Rock X's this year : ( Last year I had a dozen of the rock X's and at 8 weeks they were HUGE. We don't eat a lot of chicken here so 12 birds was a years worth. Wish I could find some locally and on sale. Good score!
Oh, I do have 16 pullets growing up to join my current flock of layers. I really didn't need any of them, but who can resist spring time babies?

Quick, Carolyn! go and get them! yay!

We have a flock of Black Australorps that are in their 2nd year so no layers this year. But we just got our Red Rangers from McMurray.

Oh dear.....we weren't supposed to getting more chickens until a chicken hut was built, but Lester wilted, and we now have an incubator humming along in the kitchen, which has twenty eggs in it! Instructions I gave to my man: Get that chicken hut done!

No discount on the TSC ducklings I bought today but I did ask if they discounted all of the equipment they used for chick days? I was told yes, but the girl couldn't give me any prices so I left my name/number. I've been eyeing the stock tanks they use for brooders. Which I totally don't need. :)

how goes the chicken hut, Vera?