Two of my goals for this year were to do a better job with the housework and also to get down to a more reasonable number of chickens. Apparently neither of those things are going to happen. I can't find a matching pair of sox and this happened yesterday.... 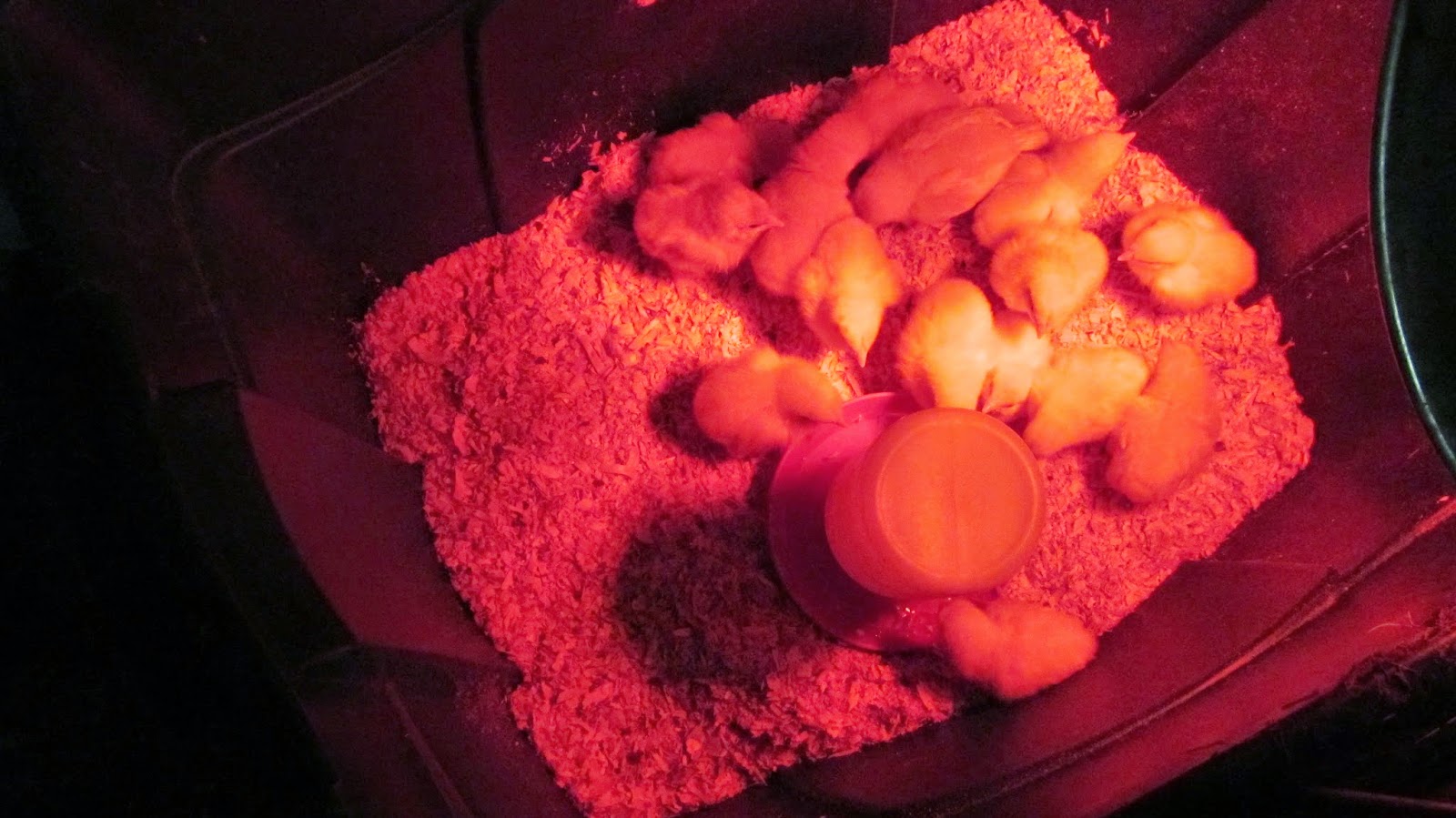 Next batch of little buddies.

Technically I went back to the feedstore to get dog food and came out with more little buddies. You'll remember that we intended to get another round of meat chickens - which was always the plan - but you know how it goes. I also got 5 Buff Orpingtons and one, lone singleton of ambiguous origins.

When I looked into the bin of Buff's I saw one bigger, weirder looking chick and I thought, "Gosh I hope I don't get THAT one...." But then the gal who handles the chicks at TSC gave me his sad tale....and I ended up with one weird chick. He is probably an Americauna... and may be a rooster. We'll see what happens. But I was glad to give him a home.

We love the Buff Orp's for their beautiful shape and coloring, their easy going nature, and their laying abilities. We haven't had them in a while so I'm super excited to have them back in the barnyard.

Around here TSC will only have chicks until about the 28th. They will probably have a last ditch blow out sale on or about the 26th so keep your eyes open. Be sure to compare prices also. The first TSC I went into had meat chicks or $2.99... the second had the better price of $1.99. I do not know why they are priced differently.

If you are keeping track I also purchased our third bag of chick food at about $15. Tracking costs will not get kind of dicey because we have the second group - but I'll keep you posted.

The first group are doing great. They still want the heat lamp on which seems weird but we've had fluctuating temperatures. While I'm going to do some moving around today I don't think the first group will be outside yet - especially with that owl that has been hanging around. And we've heard at least 4 hawks as well. 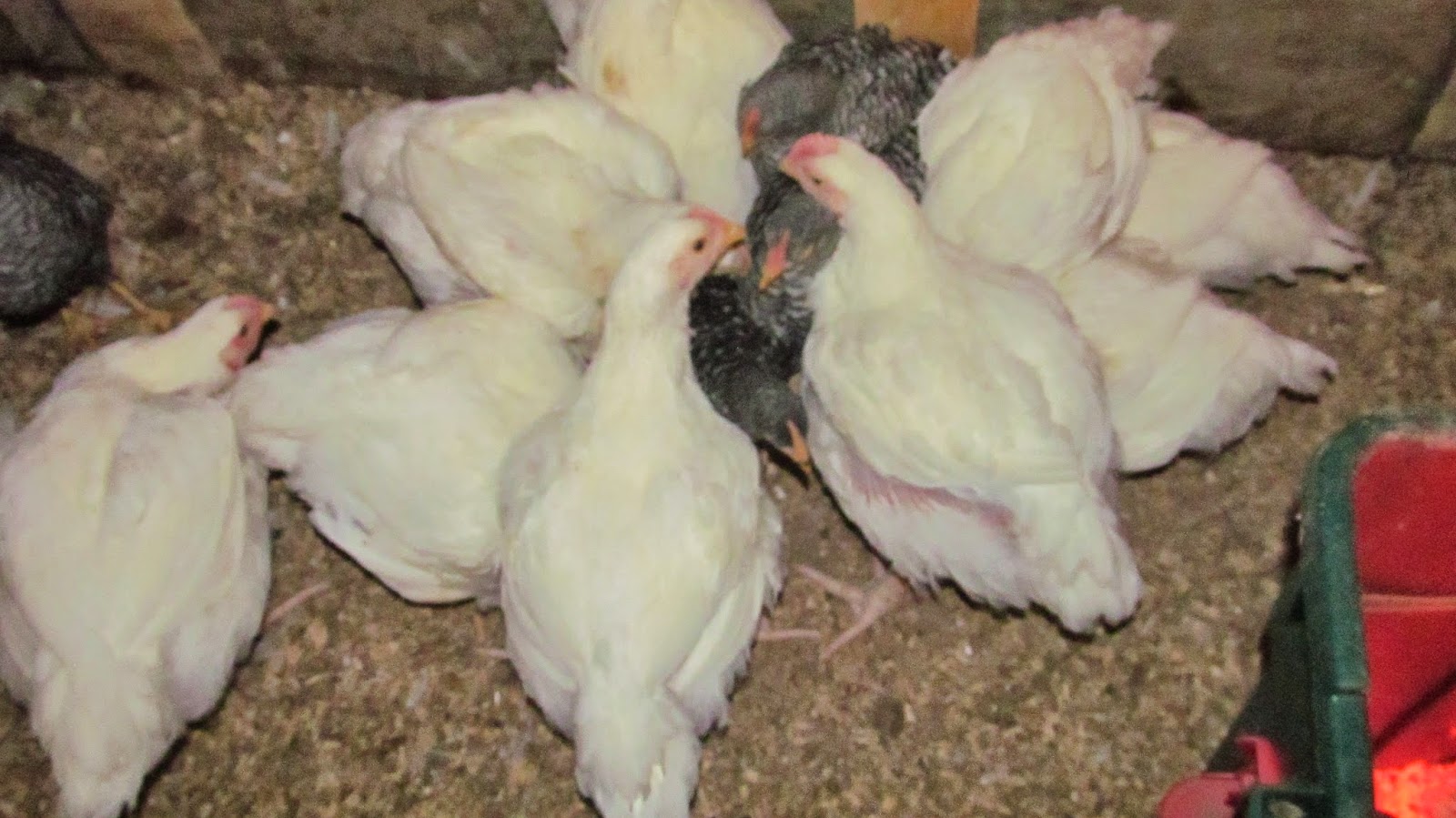 The meats have outdistances the "normal" chicks by a mile - and at about 5 weeks they are closer to the recommended butcher age of 7 weeks. But we'll keep them going for a while yet.

Happy Friday everyone! Do you have a matching pair of socks and a reasonable number of chickens? If not, friend, you are not alone.


Posted by Ohiofarmgirl at 8:11 AM

Buffs are lovely hens, but we find the cockerels a bit too laid back so prefer a 'normal' barnyard rooster to keep the girls happy. Eventually we shall get a meat flock in, but that project is way down the list of 'to do's' at the moment. Hope you have a good weekend and hope you find your socks!

Thanks Vera! We've had a couple of the roos...we found the same thing - so they were very delicious. The sock thing is a struggle - every day... ha! ;-)

TSC will fluctuate pricing based on local competition. The biggest competitor in the mid west Ohio region is Rural King. The TSC in my town claims the rural King that the TSC in the city I work in (15 miles down I-70) is too far and is always more expensive

Thanks Bryan! It just seems weird to me how the next town over will have such different pricing. The Rural King nearest us is still pretty far away - but I learned they have chicks all summer?? I'll have to check them out. Thanks for the info!
:-)