It's over. First frost and freeze.

I've been sitting here watching the temperature... it's been holding steady at 28* for hours. Summer is dead. It's over. I'm official recording in my notes that we've had our first frost and freeze.

I'd put a picture here but I left my camera outside and it's frozen.

But not now. I have to admit that my beloved summer is over.

So begins the season of me complaining and crying about the lack of sunshine and good growing weather. It could be a long season... we've got a good five or six months before I'm happy again. 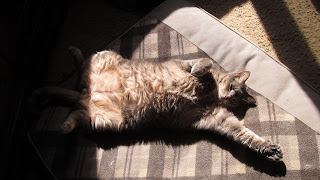 I guess I'll just stay in the house. Nicholas volunteers to snuggle me.

However... for the next 10 days we return to moderate to 70* temps and above freezing mornings. So you can see why I'm suspicious of fall. It's wicked, tricksy, and false.... it starts... it stops. The whole thing just makes me mad.

I'm probably going to just go out and lay in the yard until summer starts again.

Posted by Ohiofarmgirl at 8:02 AM

We had the first frost in VA yesterday and this morning it was 28. Clearing the garden off for next year.

We had heavy frost nut wire protection. All good until I get back.

We had heavy frost but with protection. All good until I get back.

We had a hard frost here last night too. I was overjoyed when I looked out this window this morning! I think everyone eventually gets to the pont where they are just ready to be DONE gardening for the year and I had hit my limit. Now I get to look at seed catalogs and not feel guilty about not weeding.
Before you go lay out in the cold yard, you should make sure no one's watching. One time the neighbor kids saw me laying in the snow after shoveling the driveway and asked their mom if I was ok. I think they thought I was drunk.

That is one big snuggly looking kitty!

I refuse to give in! We built a redneck hoophouse last week to preserve around 12' x 16' of summer. The lettuce and kale are happy and so am I!

HDA - we havent taken one of the window AC units out yet because we know the temperature will just flop around. ugh!

SBF - and then did it warm back up? ugh!

CTF - i'm usually exhausted and looking for a killing frost right about now but for whatever reason i'm still hanging on. bah!

PJ - he really is! I love my big Nicholas!