I probably should have made more of an effort to watch the news last nite. No one was more surprised than me to find out about all that snow this morning...... 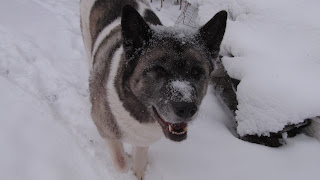 The dogs were overjoyed. Kai's snow smile says it all.

Yesterday's snow could have been described as The White Malaise.... today it was The White Death for sure. 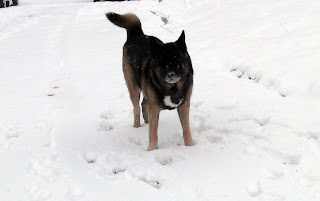 The Black Death loves The White Death and immediately shoved his big face in it. Oh Bubby!

Chores were tough. All of my boots now leak... but we are more than halfway past the point where buying a new pair of winter boots make sense. The winter mocks me. 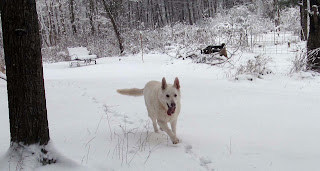 Even My Most Excellent Good Dog got all derpy over the snow.

I had no choice but to make my attitude improve with stuff in skillets.

Yesterday I made this skillet cake. It improved things tremendously. Today I had to bring out the big guns.... 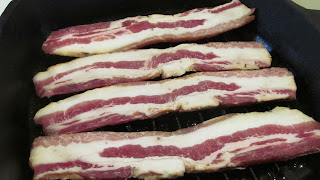 ...bacon. This is the before. There is no after pic ... other than an empty plate.

This is our home cured and smoked bacon. I love it because it's more like a tiny, little bacon steak instead of what store bacon is like. Even the stuff from our butcher is not really bacon-steak-y. You need to eat it this with a knife and fork... and maybe a drizzle of home made maple syrup.

The winter storm continues to rage against my good nature.... but I resist Snow Rage with stuff in skillets.

Happy Tuesday everyone! Are you making bacon? I mean like... marching out there and butchering a pig? I know someone who is today! Good luck! Yay you!

Posted by Ohiofarmgirl at 11:31 AM

No snow here in SW France, just raining and blowing a gale!

dont blow away, Vera! the snow here is on my very last nerve. i have had it with being inside. ugh!

We may hit 80 on Thursday here in San Antonio...

if you tell me you are wearing flip flops, Charlotte, i might start crying...... ugh!
:-D