The Loud Bug continue to vex...and it doesn't look like it will end soon.

My continuing coverage of The Loud Bug Invasion goes on..... in today's news, they are still here. Being loud. Very loud. There is a new and more annoying noise now.


Our poor trees are covered with bugs.

There is also some new activity. The bugs are now flying all over erratically - which means they are landing on me. There is a lot of hopping around happening. It's totally gross.

The erratically flying bugs is also making the inside cats even more insane. There is a line of cats at the windows watching the bugs all day long. Little Mo even tried to climb on one of the window screens to try and get one....and he was sent to do hard time in time out because of it. 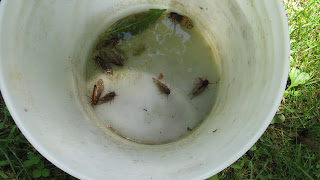 The bugs end up everywhere.

Mercifully the bugs don't get going until after the sun comes up...and they are mostly quiet in the evenings. In the afternoons I've started watching really really loud movies, inside, with the windows closed, and the air conditioning on. It's really annoying.

It's worse because the folks in town don't hear them so no one believes me.

One of my pals posted this video... it's supposed to be about the tragic life of Loud Bugs but all it did was make me mad. The "new" noise is at 6:42.... it's worse than the other noises. It's like living in an angry jungle.

I thought this bug thing would be over within three weeks of them first showing up.... but the video said the whole thing will last about SIX weeks. I don't know... I might have to go somewhere. 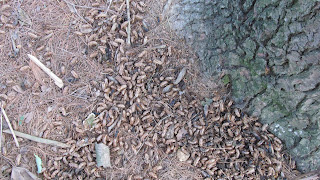 Bug bodies and shells...everywhere. Thousands of them. I need more chickens.

Meanwhile, the outside work continues. I've also lost complete control of the hen house. Nothing but chaos and I need to get a handle on it. One of the hens is fighting with one of the ducks to have a nest but neither one of them is doing a good job. I need to take up the (ruined) nest and make everyone go outside and eat bugs.

Happy Wednesday everyone! Are the bugs bugging you?

That's awful! No I wouldn't like bugs landing on me either.

Crikey but those bugs look like horrid creatures, and I am so glad we don't have them here, although we do have our quota of summer horrids, but the long spell of cool weather has kept their numbers down so far.

I imagine that you could compost them....

still no Loud Bugs in my part of northeast ohio (i'm closer to pittsburgh than cleveland - go, pens! and go, cavs!). local tv said last night that our brood (an area of two or three counties) won't come up for two years yet. but the slugs are making up for the absence of cicadas this year. more slugs than ever. --suz in northern ohio