It's hot, Nicholas saves me from a Loud Bug, and more on those goats....

Saturday was a hotsy-totsy... the weather guy said it was the hottest day in three years! And swampy... it was hot and swampy. After a while we gave up, went inside, cranked up the air conditioning, and watched loud movies. My hubs' choice for movie? The 1953 version of War of the Worlds.... the alien noises sound just like the bugs. I can't get away from it. 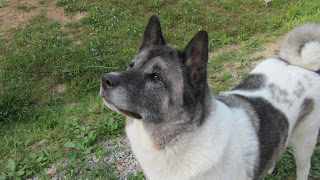 Guess what she is looking at?

The other day I walked inside and there was a Loud Bug on me. I flung it off me in utter terror. Then I realized there was a bug in the house. I needed an assassin...because I sure wasn't going to touch it.

I called The Grey Terror by name exactly once. He arrived on the scene, killed that bug, ate it...and stomped off twitching his tail. I honestly don't get the "cats are jerks" thing. Based on results my Nicholas is better trained than half the dogs I see. 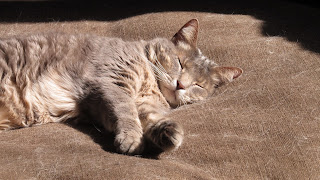 My hero. He's a little lazy most of the time but definitely a man of action.

I had some further interest in my post about why we are considering becoming entirely goat-less.  The long and short of it is.... they have outlasted their usefulness - at least in our case. For now. One of the things that changed was that my husband got a new job. Without saying too much about the details of our life, the old wisdom about 'why by the goat when you can get the milk for free?" still holds. So since our household dairy needs are mostly met we no longer have a pressing need for tons of milk.

But what about the barnyard? Don't we need all that free milk for the pigz and chickens?

Well this summer is shaping up to be somewhat different than before. Based on our freezer space and our projected needs.... we may not get pigz this year. We had a pig-free summer before and we loved it. It was quiet and not stinky. Of course we were over run with turkeys that year - which was hilarious. But not having pigz is just fine by me. 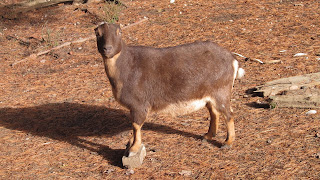 So if I do the math, *OFG holds up piece of paper covered in scribblings.....*  then you can see here that goats may not fit into the equation. Especially if they are not milking and probably will not be in milk ever again.

Both Debbie and Nibbles are kind of on the old side... and poor Debbie had such bad congestion in her udder the last time I'm just not sure it would be good for her to be in production again. She had a couple of very hard births so her days as a wildly successful milker are pretty much over.

Remember that farming is a series of hard choices about managing your own situation. Not every body gets to stay. We are looking down the barrel of hard choices this summer and our thoughts of being entirely goat-less is one of those decisions.

Don't ever be afraid to critically examine your situation and make adjustments. What worked for you before may not work for you now. Effective farm management means there will always be changes.

Happy Monday everyone! Was it hot there? Did your biggest cat save you from a bug?

Cats are not jerks. They are independent contractors who do what you want them to when it fits into their plans and if they aren't to sleepy.

ha, PJ! all of the cats i've owned have come when i called them by name, are hilariously funny, interactive, and sometimes helpful. they are amazing little creatures.... and they sleep most of the time.
:-D

I love Nicholas!
Cats who come when called (even if you have to call them by the name of "meat") are great. I still miss the sound of the heavy Thud when the Fat cat came down off his pillow to meet the man by the door whenever he came home. (Fat cat is not an insult, it was his true name. Hilarity at the vets of course, especially when he came in with his even more gigantic brother, Small cat.)

hey OVG!!! Nicholas sends you tons of hugs! and yay! how fun about Fat and Small. terrific names. i love a big ol' purring cat - the bigger the better.
:-)

I love our cats and I've learned that when Elyse has a certain posture she's telling me I need to pay attention to something. A wasp or stinkbug. Once a baby snake. In the house! What's going to happen with the goats? If you sell Nibbles, remember that she's now an international celebrity and price accordingly. :)

Good to remember that just because something was great last year or the year before doesn't mean it's great for you now... thanks for the reminder.

i too, CTF, have recieved a snake as a gift. good kitty! EW! and i laughed about Nibs... yep. i'll have to factor in her celebrity
:-)

thanks, Jen, i sometimes hold on to things too long. i'm trying to get rid of that habit. it's tough tho... so a lot of thinking for sure.