I offer this as today's still life. What's on your counter? 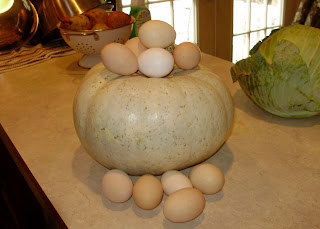 Today we are working on the last of the blessed pears, some of the 'taters we dug up, and I'm parting up my $0.19/lbs turkeys from the store. And of course I have a pumpkin in the oven. The house smells like heaven on this first-cold-golly-it-might-even-snow-day-of-the-season.

Looking thru my notes I found this little bit that I thought I'd share. I was kinda laughing about something like this today so I dug it up.

I call it "Back from Babylon" or "Angry Bread Line"
--------
I recently went on a short jaunt to Babylon  – also known, loosely, as civilization. I was so glad to get back! Back home to the mud, the cold, the livestock, and the jacket with poop in my pocket…. Ah what a relief!

So I went to see some pals and their new baby and got another whiff of my former Big Life. I can tell you with 100% certainty that civilization was ridiculous. While I had a great time with the young family, I couldn’t have cared less about civilization. For the first time since I left my Big Life, I really didn’t have any desire to go back.

First, I completely embarrassed my gracious hosts by being too friendly and talking to random people. Back here a ‘Hello, friend!’ garners you a warm smile and a short chat. Out there I got the same kind of look I’d get if I were a knife-wielding crazing person. So I turned it down a notch and basically treated folks with a casual disregard, instead of Babylon’s norm – bitter indifference.

The incident that got me was when I went into a noted magazine’s pick for superfabulous new microbakery smack dab in the urbany-chic up and coming neighborhood. I opened the door and quickly scooted in as it was crowded inside and it was just plain cold outside. An angry voice behind me demanded, not said, demanded, “It starts here.”

So I turned and found the angry face that matched the angry voice and I looked at her like she had lobsters growing out of her ears. She was obviously talking to me but I wasn’t entirely sure why. So I gave her a questioning but friendly look.

“Pardon me?” Jetlagged as I was I still couldn’t figure out why she was scolding me and I was genuinely perplexed.

“The line starts here” she said acidly. She said it loudly as if the other patrons would appreciate her scolding me. Ahh…. Then it all came together…. She was afraid I’d sneak in front of her and take the last artisanally crafted goat cheese and arugula flat bread.

I was tired. I admit it. But I couldn’t stop my own mouth and found myself saying, loudly, “I thought I’d just come in and look. If that’s all right with you.” (Big Midwest smile here) A few snickers from her line mates. And a blank look from her.

I was still smiling. “Have a great day.” I wished her and I moved on.

I thought about how the folks down at our little feed store fight over, not who’s first, but who else can go first out of sheer politeness. Oh yes. I was back in the thick of it. The “me-ism”, the DWSA (Driving While Self Absorbed), the I’msogreatandyou’renot-ness…..  I have to say this time I found it kind of amusing.

While I hated leaving my young family and the visit was far too brief… I was glad when I stood outside baggage claim and The Big Man rolled up in the big work truck. We high-tailed it back for our little Amish town where you can’t get Thai food but the people are nice and are genuinely happy to see you.

The Big Man did a great job with all the critters. The turkeys were turkey-ing, the goats were goat-ing, the clucks were....well... clucking. And the dogs were very very happy to tell me everything that he did wrong ("Momma doesn’t do it that way…..").

So I got home. Back into the thick of this. At this writing I have two kettles of lard going, two stockpots simmering, and I’ve made another batch of the bourbon-cider-butter based country style ribs for supper. Ahhh.. home. I made some bread, dug some zucchini chocolate chip bread out of the freezer, and am going to get some ‘taters for roasting as soon I post this. The young cats are playing at my feet, the dogs are on their places, and all the critters are tucked in. Ahhhh… home.  Wouldn’t trade it for all the artisinally crafted, shade grown, fair trade, certified organic, small batched roasted coffee that Babylon has to offer.

Have a great day everyone! And really, I mean it. Genuinely.
Posted by Ohiofarmgirl at 2:27 PM

I've never lived any other life, other than the country one and I confess I haven't got much tolerance for "city" but have found the best way to deal whan any type of byotch is with kindness. It disarms them and makes them feel stupid.....such fun!

Must go visit this place some time, Babylon. Is it on this planet?

Are you sure you weren't dreaming that you visited Babylon 5?

Ah yes, the tragedy of civilization. My wife and I watch in horror as it slowly encroaches upon our little piece of paradise.

"Barbarism is needed every four or five hundred years to bring the world back to life. Otherwise it would die of civilization." ~Edmond and Jules de Goncourt

I loved your tale of the trip you took to babylon...and I'm still laughing about the rude lady in line.:)

GW - I keep trying to be nice but golly, you'd think I was asking for "all their money and they wallet" by just being polite.

Heiko - yes.. its a crazy plant with aliens who think they are all very important.

Mr H: we think we are safe here because the Amish don't usually up and move. If only the ladies would learn to make pad thai....
;-)

Wow, what rudeness! You had the perfect response too!

I've just spent quite a bit of time catching up on all I've missed the past few months - I'm not finished yet, but I wanted to drop a note here and tell you I SO understand this particular post. I'm glad you made it back out alive!