Piggin' out in the pumpkin pile 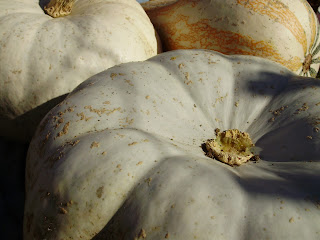 A couple weeks ago we left a note in a the pay box where we got that spectacular blue pumpkin. A farmer a couple towns away had a huge wagon full of them in front of his place

In the note we thanked them for their lovely buncha pumpkins and asked them to call us if they had any ugly ones they couldn't sell or that they wouldn't (or didn't) compost... and we'd be very happy to take them off their hands. And they called! So we went on down today to load up the truck. It was great!

It was the most sincere pumpkin patch I had ever seen. My eyes nearly popped out of my head and my mind was boggled. The Big Man started picking some pumpkins (where they told us) and I went on the hunt for the elusive blue pumpkin. Technically its a Jarrahdale. I've also seen them called blue "cheese" pumpkins. Of course I found them about 3 acres away and it was a very long walk back to the truck with those very heavy pumpkins. We left some of our honey for our new friends and headed home. 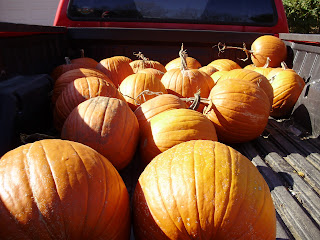 Excitedly we filled up the trolley and trundled a load down to the pigs and threw the pumpkins at.. I mean.. to the hungry oinkers. They went hog wild. 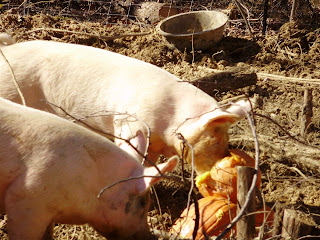 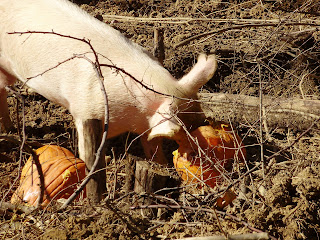 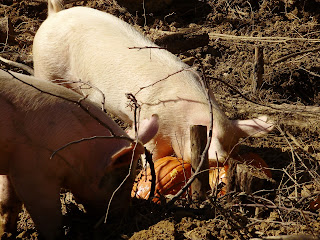 Did you know that pumpkin is a natural wormer? Just another reason to load up the hogs with pumpkins. Plus it gives them something to do. And they really dig in. 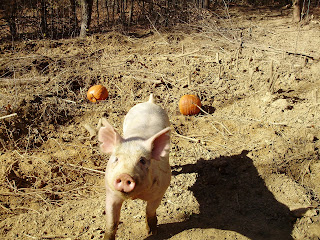 And a happy pig makes good bacon. Go bacon!
Posted by Ohiofarmgirl at 6:48 AM

Those are some pumpkins! Must feed some to our dog to de-worm him. He eats absolutely anything! So there'll be plenty more pumpkin scones coming up.

Good find! If those little piggies only knew what your were up to feeding them like that...poor fat little piggies. Perhaps you should name them Hansel and Gretel.:)

Hello Heiko! Pumpkin is great when you making your own dog food. And the pups love it.

Ha! Mr. H, we (loosely) named them Ham and Bacon. Eat pigs eat! We've also been feeding them (free) black walnuts. We do a lot of foraging/gleening but my pal, Freemotion is the queen of feeding pigs for free. I don't think she's paid for corn or bagged feed since mid-summer.

Hi CC! First, I'm so sorry you are suffering from GSA (Goat Separation Anxiety). You'll be just fine - and so will they, really. Honest. But have some ice cream just to make sure you fully recover. And yes, the pigs totally love the pumpkins. You should see them go crazy for milk!

Hi OFG, my post is up. I hope it does justice to what you had in mind. Cheers!

Do you think they will work as wormer for goats?????

hey WCG! yep it sure is.. lemme see if i can find my pal Freemotion.. she's good with some like this.
:-)

hey Free! can you give the particulars?

OFG, Thanks for the cheer-up, I had ice cream yesterday like you suggested. The girls have been bred and I may pick them up this weekend.

You'll love them when they get back. Nibbles looks like a heifer...and yesterday she laid around complaining...