What brothers are for

Our Kai with her big brother, Lucky: 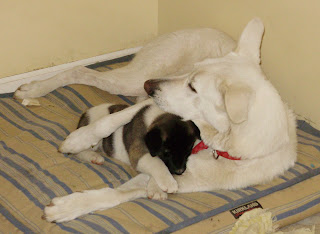 What else are big brothers for but to give you snuggles and show you how to be a dog?
Some folks have mentioned how well trained, and well behaved, our dogs are. So I thought I'd throw out how we run our "pack" and maybe it will help folks with dogs or are considering getting some hard workin' farm dogs. I don't have a lot of experience with dogs - we got Ti when I got here to The Good Land five years ago and I've mostly been a cat person. But I figure we must be doing something right. One of the best compliments I received in a while was when my pal, SD, told me I was probably more of a dog person than I thought I was. This was coming from a woman who has rescued almost 400 dogs. I nearly fell over and I warmly received such kind words. So, dog person or not, here's what I know.

First, I'll say again that there is no way I could get all this work done without our team of hard workin' farm dogs. They are like having an extra pair of hands. Smart, willing to work, and driven to succeed our dogs Titan and Lucky are my best "tools" to running our farm. I love the comradery from being with dogs. Everything is "the best thing ever" and its a parade everywhere you go. This is very different from cats - who are very happy to barf on you while you are sleeping. Don't ask me how I know this. Anyway.

My number one rule for success with dogs is: Remember they are dogs.

I think the worst thing Oprah ever said was that dogs are "little people in fur coats." Nothing is further from the truth and this kind of hogwash is the cause of most dog problems. Its easy to understand why folks get confused. The best thing about dogs is that they read, and respond to, our body language better than any other animal. This gives folks the impression that they are like people. But they are not. They are dogs. It surely doesn't mean we don't love them less, it just means they are driven by a set of hardwired behaviors and instincts that make them work in a dog way. Which is great once you grasp this truth and work with it.

So we don't treat our dogs like children and certainly not spoiled children. We never ask them to do anything -we issue commands, we don't dress them up like people (Titan would die of shame if I ever put a kerchief around is neck), and we certainly don't put them in purses and carry them around. Around here the tail is not wagging the dog, or I should say, the dogs to do rule over us.

Instead, we have a pack. We use the natural instincts of the dogs to relate to them in a way that they understand. We have a physical hierarchy (the biggest and strongest is in charge - that's The Big Man), everyone has and knows their job, and we run a tight ship with no shenanigans. We use hard work and discipline to keep everyone in line - as we say around here, a tired dog is a good dog.

Take our Kai for instance and how she is fitting into our structure. If she were younger our old lady dog, Shady, would probably take more of an interest in her. But for now Shady just wants to be left alone so Kai keeps clear of her. Our #1 dog, Titan, is the current leader (the dog alpha, while we are the alfpha of them all) and his job isn't to play nursemaid to some puppy - his job is to be at my side and help me run the show. So the lower member of the pack - that would be Lucky - is given the job of "handling the new kid."

This means, Lucky plays with, corrects, and keeps track of Kai. He patiently sits there while she nips and pulls at him and only corrects her when he's had enough. He doens't ever hurt her, he just "mouths" on her head and neck to show her he's in charge of her. In turn she submits to him by stopping what she is doing, or by not struggling, or by cowering down. Ti does this to Lucky also...and we do it to both of those no-good-nicks if there is ever any malfeasance and we have to grab someone by the scruff of the neck (rarely). We tell Lucky, "Good dog" when he is playing or taking care of Kai to encourage him to keep up the good work.

The first thing I taught both dogs when we brought Kai home was "find that puppy." If she wonders out of our line of sight we send them off to find her. Ti will go and point at her with his nose and then come right back to me, and Lucky will hang back and round her up to get her to follow him. He also keeps her out of trouble. The other day Kai was toddling after one of the ducks. But I was on the other side of the fence and couldnt get to her to stop her. So I pointed to her and said to Lucky, "Go and stop that puppy!"

He ran over to her (in a friendly way) and got between her and the duck and mouthed on her neck. Then danced around to get her to come back toward me. That is a hard workin' farm dog, for sure. But he doesn't think its work - its just what dogs do. And he's very happy to do it. So our Kai is learning the ropes from her older brothers, with us watching over her of course. She's gonna be a great farm dog, for sure.
Posted by Ohiofarmgirl at 1:43 PM

Such a great post. Nothing irritates me more than people who treat their dogs like their children. They are DOGS for pete's sake! We love them, but they are dogs, not people. We also treat ours as members of the pack and we have really good, well behaved dogs. My parents have a dog and it's like "late baby syndrome". He is terrible, but it isn't his fault, it's my folks fault. My sister has two dogs and they think they are children and the dogs' behavior reflects as such.

What an excellent well written post. Dogs love to do what dogs do, and are rewarded by that fact.

I am impressed with how you are handling your dogs. It must have been a lot of work to get them to this point - a trained pack.
I think that you are so right about everything, as I have seen a lot of spoiled dogs that refuse to walk even, because they are used to being carried in a bag. But also I have seen a lot of dogs that are doing a great job of taking care of the sheep, cows...

You said that a tired dog is a good dog and to remember that a dog is an animal, a pack animal that looks at us as his/her pack...I couldn't agree more. Your two older dogs sound so wonderful...lucky you, lucky them. I love that first picture.:)

GW - you are just right, it just doesnt work.. and then folks wonder why their dogs misbehave.

hi CC! dogs love a job well done for sure.. can you imagine if goats actually WANTED to do the right thing!??!

Vrt - good to see you! and glad you are back to blogging. I don't really consider it "work" but its a lot of effort. Its more teamwork than anything - and totally worth every second to have hard workin' farm dogs.

good morning Mr H! I do feel lucky! For lots of things, especially my online pals.
:-)