Before. During. And After. Winter cover crops.

Remember last fall when I planted the cover crops in the upper garden? Finally, we got enough sunny days to do some tilling - so I got some of it done. I took a couple happy snaps of the process - its totally easy-peasy. 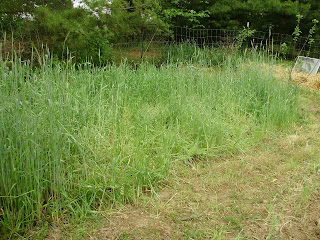 The tall wheat improves soil and entertains bouncy dogs.
First the before - see that I let it grow up. I probably could have taken some of this down earlier. But our pup Kai loves to play hide and seek in the tall wheat - so I kinda didn't hurry because we were having so much fun. That's also why some of it is broken down. We were puppin' around. 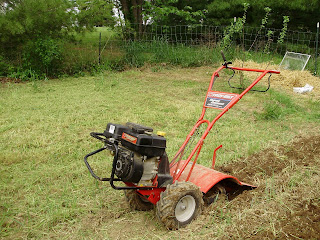 Tiller, ready for action.
Don't tell The Big Man but I used the mower as a brush hog to mow it down. Shhhh... It worked.  The mower is one of those mulching ones so it chopped up the wheat really well and I mowed in such a way so that the mulched stuff stayed in the same area. You can see that its mowed down to the stubble. 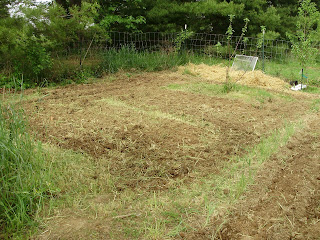 Ready to sit for a couple weeks to aid the composting.
Then I broke out the tiller to get all of that "green manure" ground up and into the...um... ground. This will add tilth to soil and make it more hummus-y. I left a small strip in the middle that I'll use as a pathway. This area is destined for beans, beans, beans, and more beans. I felt the beds could be wide. You can also see where I put a small patch of straw-mulched taters along the back fenceline. That window is one of my little "hill billy" green houses. I set some scarlet runner beans in so they will run along that fence.

I still have a lot of mowing and tilling to do - but this will get me started. This late, wet spring has really thrown a monkey wrench into my planning. But the weather guy said not to rush to get the 'maters planted because we might get close to frost temperatures next week! So it will all work out.

And in the "neener neener" category... someone recently told me there is NO WAY potatoes would be growing this early in the year (and implied what kind of idiot was I to set them as early as I did). Here are a few taters that are already coming up. Admittedly they are in my strawberries but the ones I started in my tub from the potato peelings are growing also. Neener. Neener. I say no more.... 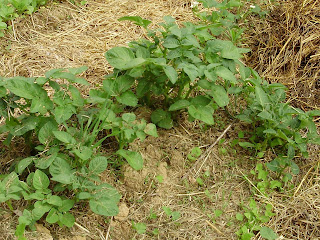 Taters. Growing. Ha!
.....Except that I hope you are having a great weekend!
Posted by Ohiofarmgirl at 6:43 PM

Can you let the goats (or sheep or pigs) eat the winter wheat or is there a reason you have to till it into the soil?

Hey girl, I planted my potatoes too so that person can just hush. I live in Ohio too and it's been a battle to get anything done. My hubby said if anyone commented bad back to me that he would respond back to them. I pray I don't get a nastygram!
Have a great weekend. You are doing a great job!! Keep it up. We are all learning alot from you.
Maple View Farm

I found a bunch of potatoes sprouting in the worm bin so I stuck them in a garbage pail and threw some dirt on them- they've been outside for two weeks and so far so good!

Tell the naysayers I have potatoes too. I planted them around tax day. One bunch of leaves got a little frost singed on the top but that hasn't slowed it down one bit. So DOUBLE NEENER!!!

CC - Yep! I gave some of the wheat to the goats, but really, that soil needs as much help as it can get.

Thanks Mary! We're all in this together, aren't we?

Great work, Callie! Isn't it fun when the compost works for you?

Yay, BFMF! And double neener is just right. I can't wait for my early taters to be served up right next to some pork chops.

I understand complete what you're saying about those nay-sayers. If I have to listen to one more person tell me it's WAY too early to start my garden I'll scream. I should have already been bringing in my cold veggies, if it wasn't so rainy.

What kind of wheat did you plant? I think I want to try that this fall. My little garden will be needing a lot of help for next year.