Today I marched down to the hill with just shy of two gallons of fresh and delicious goat milk for them pigz. They were overjoyed. The goats are still scandalized that their beautiful milk is going to the hated pigz. Too bad ladies! We got some bacon to grow! Which leads us to the question, "What are you feeding those pigz?" 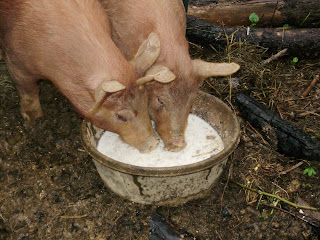 Goat milk? Pigz love it!
Now that we have four milking goats the answer is... a lot of goat milk. Some folks have cautioned me that if you feed pigs milk that's all they will eat and will refuse the hog chow. We found that to be true for about a day. Just like naughty children, pigz will eat when they get hungry enough. We're sticking with our standard pig feeding regiment - lots of milk, cooked eggs, corn, and some hog chow.

But before I go any further, I'll say that you can certainly feed your pigs hog chow and they will have a consistent, balanced diet which will work. You'll also pretty much have a commercially raised hog which is fine if that's what you want.  We feed our pigz differently because we want a more naturally raised hog which we feel is a better product than a commercially raised one. We also like the idea of using local products to feed our critters - and you can't get much more local that up the hill in the milking stand! So for lots a reasons this method works for us.

Anyway, we're having to do some re-figuring with the rising price of feed to make sure that our on-the-cheap-way of raising pigz is still cheap enough to make sense. One thing we did to help us keep costs low was nab a couple of highly sought after Tamworth pigs - a breed that does great on pasture and loves to root. Not only does this heritage breed produce the best bacon, they are good workers and will help us clear the Impenetrable Forest and feed themselves at the same time. 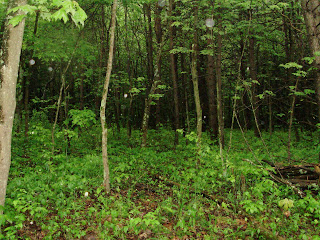 The Impenetrable Forest. Hey Pigz! Go clear it out!
We are sticking mostly to our feeding regiment that I talked about here. You can see how the math works out for us and how we determine how much to feed and when. This year's pigs are actually bigger than we thought they would be so we are probably only to get one or two bags of hog chow before switching them over entirely to corn. Mostly the hog chow will be a back up if we feel they are not continuing to grow at a steady pace. So far they are growing right along at a good clip on just corn, eggs, and milk.

At this point the pigz daily feeding protocol is pretty much a couple scoops of corn, a couple gallons of milk, about a half a dozen hard cooked eggs, and about a half a scoop of Calf Manna. This is provided over the course of the day. Some of the grain (corn and Calf Manna) is still in their feeders at mid-day when I check them so its probably a little too much. But having "free choice" is fine for now. They are also doing a great job of rooting up their temporary pen. I'm going to set them to work on the stumps pretty soon and hopefully they will have it cleaned out before we move them to their permanent summer pen.

One thing to note is that we don't feed the pigz a lot of scraps from the house. Honestly we don't have too much in the way of scraps this time of year. I'm not processing any veggies from the garden so there's not a lot of leavin's - and we don't have a ton of leftovers from the kitchen. Anything "scrappy" usually goes to the hens and not the pigz. We concentrate on giving them what we know will work - high protein with some good fat building carbs.

This year I'm going to try and grow more feed for the pigz in the garden. I have some livestock beets and turnips and such that I'll start in the garden areas. Our soil is still pretty bad but I'm hoping that I might even get some corn to grow - or at least some grains. We have the upper and lower hog lots from last year designated to be planted soon. The upper lot will be turned into pasture for the goats and hens. The lower will become the "pig garden." Or at least that's the plan. We'll still do our share of gleaning from friends with produce stands and farms.

Even with the higher cost of feed we still think we can raise up a couple pigz on the cheap. What about you?  Got goats? Got chickens? Well friends, then go and get some pigs!

Happy Sunday everyone!
Posted by Ohiofarmgirl at 6:13 PM

I am glad to see your post on feeding your pigs milk. I have found a local source that will give me all the free milk I want. It is expired milk although the last batch I picked up was past the expiration date by two days. I am also raising a Tamworth cross and he loves the milk. He is being fed some hog chow, peas and lentils screenings, milk, hard boiled eggs and kitchen scraps (no meat).

Those are certainly some nice looking pigs! They say you are what you eat..Feed um good for good bacon :o)

We only have goats (well, and cats, dogs, mule, horse, chickens...), but we use the goats to clear the Evil Forest, but was wondering:

As you are a keeper of goats AND pigs, which would you say are better at brush / forest clearing?

Wow, We are in the process of clearing forest land too! The pigz will dig up stumps?

Is your forest land fenced?

Great work Amanda! And wow how lucky to find a source. Its actually OK to give pigs slightly expired milk - some folks let it set for a day or so.

Hi Ginny! They are going to be amazing when they grow out. And there will be lots of bacon! Whoot!

Hi Carolyn! It depends - the pigs will take the forest down to the bare nub - especially if you give them a smaller area to eat down and then move them. It will look like a moonscape when the are done. Goats tend to pick and choose but will clear brush as far as they can reach. I don't like to use my dairy gals as brush clearers because their udders can get scratched up - or drug thru the poison ivy which will get all over me. Plus - when the pigs are done you can at least eat the bacon!

CC - Yep. You can either drill holes in the stumps and fill with corn. Or just keep scattering corn around them. We're always surprised at how and how much they will eat.

Our property is fenced on 3 sides and will finish the back soon. But we'll have the pigs in a specific area - with electric to keep them in. They are way to destructive to let run free - and we need to keep an eye on them.

Lordy I need a field trip! Keep up the pig posting, I'm soaking it all in!

Great blog! From my childhood memories of dumpster diving at Pizza Hut, pizza dough, is what my Grandpa fed his pigs as well as corn. I don't remember milk, but definitely something I'll keep in mind if we decide to get a milk goat and pigs. Love your blogs!

bacon is my word verification hahahah!

I've been telling DH that we need a piglet to drink all the extra milk we have right now. He's slow to realize I'm right! I keep asking though, and one day he'll cave!! Haha!

Yes the cost of feed has gotten quite rediculous! When we first got goats, it cost us $80 a month to feed them. Now its $120 ( 8 bales of alfalfa)!! We give the chickens extra milk, all kitchen scraps and boiled ducks eggs, so they're free. The ducks get layer mash. The rabbits get a little of everything. We want pigs but have to wait a bit to put in proper fencing.

Love your pig raising ideas! We have 4 hogs here, but 2 are for 4H that the kids are raising. I can see the record book now--eggs, goat milk, etc.! Would blow the 4H judge away!

this year we are milking 2 goats and raising some goat bottle babies on the milk. The biggie here is we got a bottle Calf and we are raising it on goat milk!! You should see the dance he does when it's time for his bottle!! He absolutely loves it!! I think it will help make good beef too! And it saves me $96 for powdered calf milk replacer if I give it to him until 3 months.

Ann, raising pigs is as easy as pie. And for our money, its totally worth it. We've been wanting to get a feeder calf as well - great work!

I like rearing pigs cuz it doesnt take a good care like other poultry e.g chicken,ducks,turkey n etc...and pigs also a good bulldozer for clearing land...all In all.im happy to have my pigs..

you said it, Carron! they do a great job with clearing. we are always thrilled with the results... kind of a "hog-dozer" :-D