I was hoping to call this post "A Proper Cheddar" after a phrase we heard one day on one of those Rick Steve's travel shows. However, at one of the last steps it all fell apart and I may have to give myself a "D-" for not making a proper cheddar. I think its still going to work - so while it might still be a cheese, its an Improper Cheddar for sure. 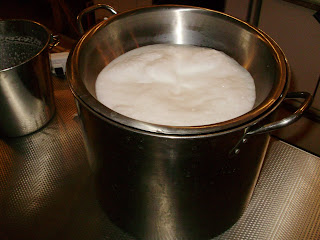 Today's milk was strained directly into my biggest stainless steal pot.
Step One in cheese making is to get out there and get about five gallons of milk. I got about two gallons from the ladies this morning so I had to heat up some of the half gallon jars of milk I had downstairs in our coldest fridge. 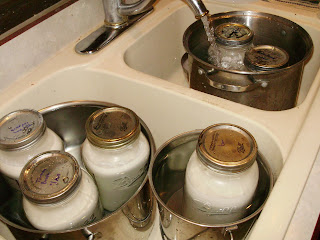 Warming up the jars - a half gallon at a time.
Heating up the cold milk is easy enough. Just put them in deep pots and fill with warm water - let the milk warm up a bit (don't break the jars!) and then heat up the water to get the milk warmed to the right temperature. Goat milk cheddar starts with 88* milk so I also used a water bath to get all the milk up to the right temperature. 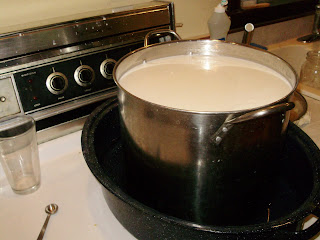 My biggest pot needs my biggest roaster as a water bath.
Cheese making is a long process but most of the time is letting it set so its easy to just go about your day - just take the timer with you.

After adding the culture I let it set for about 40 minutes. Actually I started a focaccia bread (in the oven now - its a 3 goat cheese version), cleaned up the kitchen, and went and did some laundry. The next step was to add the calcium chloride and rennet. Thirty minutes later I checked for a clean break and then... you know it... I cut the cheese (curds)! Its always my favorite step. 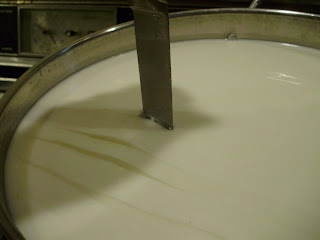 Use your longest knife to cut the curds.
Next comes the business of slowly heating the curds and stirring continuously for about 45 minutes. I was very happy with this batch because I was able to get to the right temperature (102*) in the right amount of time. Then there is more letting it set. 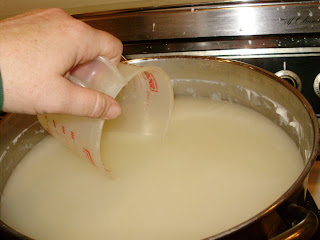 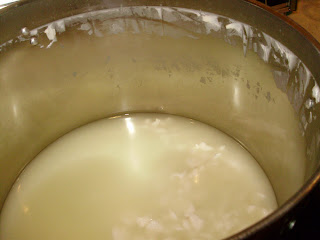 See how much whey is removed from the pot!?!
And that's when it fell apart. The last step was letting the curds rest and they were supposed to all mat together at the bottom of the pan... but darn! They didn't.  I gave it another couple tries but the curds just didn't set up right. I tried one of the curds, curious to see what happened. Then there it was - the possible cause: Tough Curds. That's right. They were squeaky and a little tough. One of my references says that it might have been because there was too much rennet or the temperatures were too high. 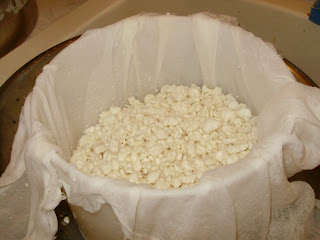 Curds, no whey, ready to be pressed.
I was also disappointed at the yield. As you can see it didn't even fill half of the mold. I went ahead with the rest of the steps which were basically to put the curds in a mold, press for an hour, then "redress"  the cheese (that just means to unwrap it from the cheese cloth, flip it over, and put it back in the press), and let it press over night. After its done pressing it will sit and dry for a couple days, cure for about a week, then get waxed.

Even tho this batch didn't set up correctly I'm still excited about this cheese. If I remember right I had a couple cheddars from last year that did the same thing. Even tho they didn't come out as a proper cheddars, I've been grating the cheese and using it like Parmesan! I'd be thrilled with a Proper Cheddar but really I'm hoping for another fakey-Parm. That will show that Rachel Ray and thwart her conspiracy to increase Parm prices! (Not really! love ya Rach!)

A couple things I'll do next time: First, I'm gonna break out another pot and start with 6 or 7 gallons of milk so that I get a bigger cheese. Next, I'll use a smaller amount of rennet. Then I need to make sure I have uniformly sized curds. And I'm gonna make sure that my darn curds mat together correctly.

That's all today in Cheese-land. Hope you had a great day!
Posted by Ohiofarmgirl at 5:58 PM

Interesting. I am trying to get enough milk together to give it a try but everyone keeps drinking it. The little Nigerians don't give a lot of milk per day but I hope I learned something from this post.

Mmm...cheese. You are getting to be quite the pro at cheese making even if this batch didn't turn out perfectly. Don't forget to watch the show tonight.:)

When you make chedder from goats milk, does it get a "goaty" taste as it ages"

CC - are YOU drinking it? Try it as chocolate milk - I swear it will change your life. I double DOG dare you!

Mr. H - you can't imagine! Now we can't get ABC on our TV anymore! I think they moved their satellites or something. So I missed the whole thing - I'm gonna have to catch up on hulu.

SFG - nope. It tastes like cheese - different and not as salty (I could add more and maybe I will). But I know some folks (you know who you are) who think a lot of goat cheese tastes bad. But then, some people dont like beets and there is no explaining that. For me, I like a bit of a tang. Some of my fresh cheeses don't have it at all and are nothing but smooth and fresh as a daisy. None of my milk tastes goaty. Does that help at all?

Ever thought about doing a video?

You are one hard-working woman to take care of your family with the things you do! All women that do this type of work should be praised for their efforts. Your blog post reminds me of stories my mom told me about her mother making cheese. I think the method was: After removing the bulk of the whey, she put the rest in an old clean pillow case and hung it on the line outside to drain the rest of the whey out. Then, she put it between boards with a rock on top to flatten it out somewhat like a wheel. I don't remember the method past that point.

I really admire your committment to what you do.

Hey David... nah I'm not the video type. Plus.. our cat Nicholas is a terrible cameraman.
;-)

VPak - Thanks so much for your kind words. You got me all "aw shucks-ing." But really - I'm just a regular person. Thanks for the info on your mother. There is so much institutional knowledge out there that is so important. And you've given me a good idea for a cheese press!