Back when we were parting up the pigs I labeled a couple cuts as "belly for the grill" and put them in the freezer. While it may initially sound like a waste of bacon-to-be....and I can't remember where I first heard about this...I've had it in my head for months. It did not disappoint. 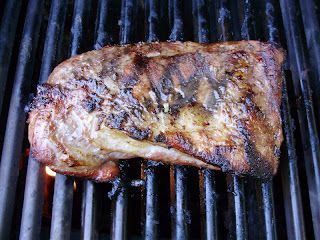 Would you just look at that! I thought my cross hatching was rather good.

Wow oh wow we had one of the "for the grill bellies" for supper last nite. It was incredible..... I wish I would have remembered which cut it was specifically. Truly spectacular.  I loosely used this recipe. And this site is really great too and uses a pork shoulder if you can't get a belly. But just ask your butcher and he can probably get one for you. Or just raise your own pigz... You can use the shoulder but I think I'd like these fatty cuts better. However.... this cut was not fatty at all. It was heavenly. 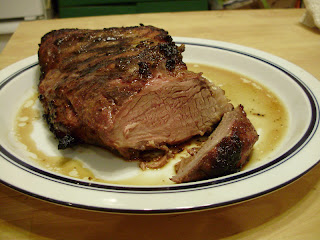 Just the right amount of fat and beautiful meat..the "char" part was perfect with the five spice.

I marinated the belly in the five spice, soy, vinegar, garlic, and I think some Thai sweet chili sauce over night. Then I just grilled it over indirect heat. That is - I heated up the grill with all three burners, turned the middle burner off, flopped the meat on the center of the grill and cooked it off the direct heat. It took about 15 minutes a side because it was a fairly thick cut. And I let it cook the longest amount of time with the more-fatty side up. To be sure it was properly "char" style I let it get a little crisp on the direct flame for a couple seconds. 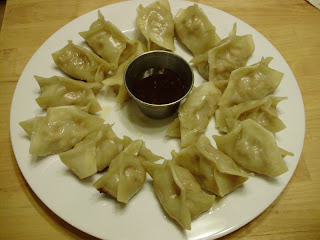 And I made potstickers also. Yay!

As I was making this supper I was thinking about my friend, S, who had a really icky day yesterday. So I was wishing I was serving this up for her with a big glass of white wine and tons of love. Nothing says love like chinese five spice pork belly prepared in the char siu way. Hang in there, baby!

Happy Sunday everyone! Now you know what to grill!

Posted by Ohiofarmgirl at 7:31 AM

That looks glorious! And Pot stickers too! WOW!

You're doing it right in the good land!

OFG hears the ruble of a 4x4 Jeep coming up the drive and then *knock, knock, knock* on her door. She opens the door to find DoC outside with a pleading look on here face. Then DoC says "Are there any leftovers? I drove all the way from New Orleans and I've very hungry!"
LOL. That looks really yummy! We make pot stickers some times. There so easy and good!!!

CC - I loves me some potstickers... so delish!

Thanks Dave - its so delish.. you have to make one for yourself!

Thanks Jody.. this was a hit right out of the park for sure.

DOC - * OFG opens the door and says, "Come on in, baby!" and seats DOC next to SavingDogs, BBH, and a few others, passes plates, everyone eats up. *