Keeping chickens out of the garden

Or rather... how to keep your garden from being demolished by hennies who sneak in looking for easy pickings.... 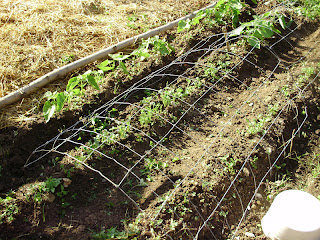 The rolls of field fence curve perfectly to form a "hoop."

Most of my hens stay out of the front yard. The geese, dogs, and I keep chasing the malcontents back to the hen yard and the lower hill where they have miles and miles to scratch around. However, some of them still prefer the garden probably because of all the seeds just laying around. Chickens! 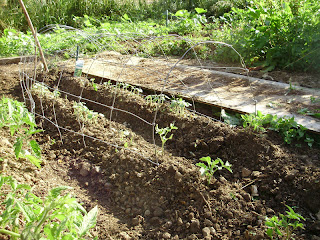 This hoop is a little taller to accommodate the 'maters originally planted under it. Those plants are now sturdy enough to withstand the hens....so I just moved the hoop over these new, younger plants.

The hens are masters of hopping the fence. I could clip their wings and pluck them bald and they would still get thru or over the fence and into the garden. So I've been employing a variety of techniques to keep the chickens away from the tender young plants and where the seeds are sprouting.

My best idea is one that I've been reluctant to use - but what was I thinking? So far using short sections of field fence as "hoops" have been most effective at keeping the hens at bay. They can't get between the holes in the fence to scratch around - and having the "hoop" low enough keeps the hens from sneaking under.

I've resisted this because the field fence is so expensive... but then so is replanting a garden. However, I can re-use these short sections, move them around when needed, and they store easily. I just cut between the holes in the fence - so that I can push the pieces of wire into the ground to secure them. And the curve of the fence from the roll forms the perfect "hoop."

This also works for the stupid cardinals. I know they are Ohio's state bird but they are a pox upon me. Dogs#1 and #2 hate them also - like....really hate them in a weird way..... so they tend to chase them off. But the cardinals keep snatching up my just-spouted seeds. I believe they got a whole row of corn out by the road. Stupid birds!

But I'm defeating them by using these field fence hoops, sometimes with some netting draped over as extra insurance. 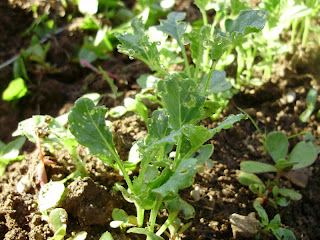 Broccoli rabe sprout in defiance of the hen invaders.

I also have my own riff on the old "bottom cut out of a plastic soda bottle" and used as a cloche to protect the seeds. Since we don't drink soda by the gallon or really at all....  we use big water jugs. Back on the old farm we had to buy bottled water and we had a bunch of those big 5 gallon water jugs. So I cut away the bottom (which can be used for lots of things) and put them over the seeds. 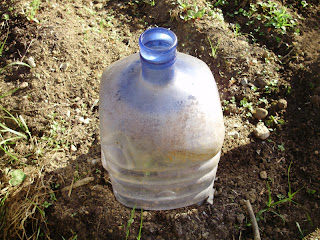 By the time the seeds sprout and fill the jugs they are safe from the birds - the stupid ones and my hennies. Just remember to water the seeds by removing the jug - and then replacing it of course. I have not had any luck trying to water thru the open neck/top of the jugs.

I probably was too lax in letting the hennies come into the garden before I planted it - which is why they keep coming over. But really I think they did a great job of scratching it up for me, eating the bugs, and leaving some fertilizer behind. Now I just have to convince them that the hen yard is the best place to roam around.

In the afternoons - during the daily "late afternoon peck around" - me and Dog#1 sit out front. Me with the hose to spray the hens, and Dog#1 with his hell yeah, are convincing the hennies just to stay over on their side. Now if that only worked for the cardinals. Stupid birds!

Happy Tuesday everyone!
Posted by Ohiofarmgirl at 9:27 AM

Thankfully the cardinals leave my plants alone so we love seeing them around our house!

I can always tell when a rogue chicken has sneaked into the garden because the mulch is messed up. At first I think "its ok, they didn't do much damage" and then I find more and more little areas that they're destroyed. I don't know how they always know when I've left the gate open! They don't tend to fly over the fence at least. They do stand outside the fence when I'm in there and watch me to see if they will get anything and the rooster tries to corner me when I come out the gate if I haven't given him anything. I also learnt the hard way that a chicken-proof fence is not cattle- proof. First they will lean over and eat everything they can reach, and then they will try to climb over, try stopping a 500 kg beast from climbing over your garden fence.....and then try getting him out without trampling everything! Cattle are now banned from the house yard because they cannot behave. The chickens are mad though, they won't even stay in our yard, we always see them wondering around in our neighbour's paddock, unfortunately they've really taken to free-ranging and there's only so much chicken fencing you want to put up!

I just keep finding more and more uses for fencing!

That's a clever idea! (The jugs over the new plants.) It's one I'll tuck away should we have any winged pest problems in the future. :)

We don't have any chickens (yet!), but I love reading about what people come up with on their farms. Thank you for posting the pics too. The visuals really help!

Vanessa... stupid cardinals.. sheesh! its like they swarm here on purpose!

hey Farmer Liz! Cows in the garden - that is a problem.. but i'm simply green with envy... I'd love cows. but not in the garden.

Dave - pretty much your #1 farming "must have" is field fence. you can never have enough.

Thanks ReSeason! The jugs are easy to store also - I just stack them on garden stakes.

I have missed reading your blog for some time now.

Your hen deterrent devices look a lot like the cat deterrent ones I built probably 7 years ago now. I made mine out of chicken wire and also covered the ends of the mini "hoop houses." As you can imagine, they were no fun to build out of chicken wire. However, those silly contraptions continue to get used every single year to protect some young, tender growing thing. Sigh.

hi Jade!!! and welcome back! we need to keep the cats out of the garden also. i keep finding..um.. surprises...eeeuuuwwweee.....

mine arent bothering my garden *cross my fingers* yet but that might be because during free range time I set the sprinkler going.. yes i know im evil .. now to keep them out of the flower beds be even better