Is everyone surviving the heat? We have another scorcher on tap today. Yesterday I can assure you I was awake for every second of our longest day... its started about 4:30 in our AM. 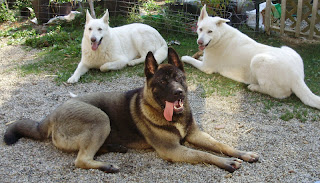 We keep forgetting Zander is a baby. Wonder why? He keeps growing. Zoikes!

I try to get as much done outside as early as possible...and this goofy bunch helps me. I let them run around as much as they can before the heat gets too bad. Poor Zander only lasted until 9:30am... we kinda keep forgetting he's still a baby and can't deal with the heat as well as the rest of the pack. 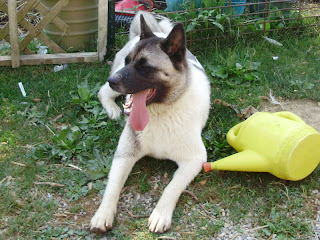 Miss Duck is feeling the heat as well - its so hot that she isn't even sitting ON her nest. She is sitting beside it. I thought I should take up the eggs but then another duckling hatched! She knows what she is doing. I was sure I saw two new ducklings... but I could only find one new arrival when I looked closer. She's still guarding her eggs so I'll just leave her be - more could be coming! 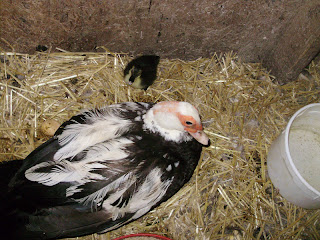 Miss Duck and her first little one

And now the funny story of how I went out the other nite for chores and was reviewing the poultry swarm... hen, hen, rooster, baby duck with no momma, goose... hen.. Hey! And there he was the most adorable little baby duckling... alone with the hen mob! So I started yelling for The Big Man - afraid the baby would be killed by the hens or other ducks..I scooped up the baby and put him in, of course, my "personal poultry incubator", and then we did a hasty search for other ducklings. We didn't find anymore - just the one. Then we had to figure out where he came from. 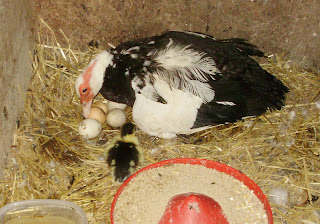 After some Sherlock-like deductive reasoning we determined he was from Miss Duck's nest and gingerly put him near her... and he peeped, and she peeped, and whew! She was the right momma. Poultry momma's aren't interested in other babies - we know that they will kill them so we had to find the right momma.

Then next morning I rushed out to see if she had any more babies. And I couldn't find the one from the night before! No baby duckling! I looked everywhere - including in the water buckets - really hoping not to find him there. Then I flashed with rage - the stupid rats. They had carried off babies before...which was why we...um... "made safe the hen house" last week... which was, as you now know, very successful. So I glumly walked out of the hen house and when I raised my eyes... there he was! The baby duckling was with the hen swarm again!! Outside already running around!

There was a bit of a chase but I returned him to Miss Duck. And I figured out where he was escaping and secured the coop so we wouldn't have any more of this foolishness. He's a firecracker for sure.

Since its been so hot I've been scooping him up and putting him in a bucket of water to splash around in...but just for a second.. and he's also been paddling around in a shallow pan of water in the coop under Miss Duck's supervision.

I have to say, I just love baby ducklings. And when they grow up...well... I'm really looking forward to a full harvest and duck eggrolls all around. But for now I'm just gonna be charmed by them.

Welcome to the flock little ones!

Happy Thursday everyone! Keep cool and keep an eye on the flocks. Looks like another day or two of this heat.
Posted by Ohiofarmgirl at 7:28 AM

Boy oh boy...there's never a dull moment at your place!

Good luck with your ducklings. I have only had one hatch under a duck hen and it died because she stayed on the nest and it just wandered around. I kept putting it back in but it wouldn't stay. Next time I am taking all the babies before anything can get them.

Are you sure that is Zander's tongue hanging out of his mouth? It looks more like a pigz ear to me!

Hope your heat breaks soon, we've finally come out the other side.
Duck sure is cute! And holy cow that's a huge pup!

Just finished reading your other posts too (Rat-a-Tat-Tat and your personal incubator). I'll echo what Robin said in her comment: Never a dull moment! :D

Hope your weather has leveled off and cooler temps prevail.

Oh! And loved the duckling cuteness. ;)