I tell you the truth nothing is as hilarious as watching and entire vet staff burst into gales of giggles when you pull your most enormous cat out of your smallest cat carrier. Thus started Nicholas's most recent hard day - the 7th of such. 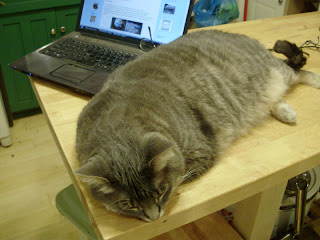 Nicholas, bigger than a laptop. Yes that is a pie recipe on the screen.

I loaded up Mr. MouseStompers and headed into civilization in the big truck this morning to see what our Good Vet could do for El Grande. It seems that he's had a bit of gastrointestinal discomfort lately. They couldn't have cared less. All of them gathered around Nicolas to see our most massive feline.

"Who is his daddy?" They asked between fits of oohing and aaahing... "A mountain lion?" They joked, answering their own question and set to laughing again. 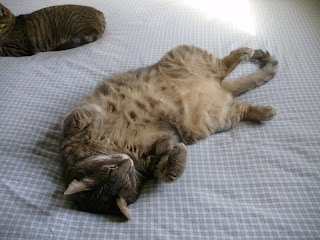 Nicholas with Itty Bitty, a more normal sized cat, in the background.

The vet techs went out into the hall and waved others into the already crowed exam room. "You gotta see this!" They excitedly told their work mates.... and then with great ceremony they brought out the scale.

Nicholas weighed in at 21 pounds. At that point who cares about the ounces.

After poking and prodding and humiliations galore they determined that altho he was big... he wasn't really that overweight. His enormous paws and head proved that he was mostly in proportion... but he could stand to loose a little around the middle. They thought that perhaps he was an emotional eater.

And so it has been decided. If you are as big of a fan of The Gardener of Eden as I am then you know that she has a chub cat too - her Alvin. So together Alvin, Nicholas, and Annie's Granny's feline friend will be forming a support group to see if they can get a handle on their emotional eating. Or perhaps they will have to "go paleo" as well.... donuts not included. 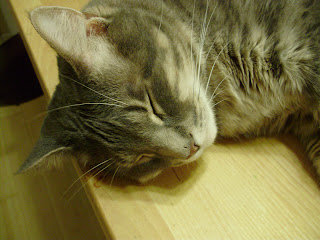 Sorry about the drama today, Nicholas. I know it was a hard day indeed. Just like these others....

At least Nicholas is somewhat in proportion! Alvin is much much smaller then Miss Banana and weighs a lot more!

By the way, Alvin says he understands the whole emotional eating thing and doesn't feel he needs to loose an ounce!!

I just went back and relived all six of Nicholas' hard days. Poor puss. I have a giant cat named Cookie. I must have been thinking "large, soft pfeffernusse cookie, with raisins and nuts - lots of nuts." He has hard days, too. Must be the lot of very large cats.

I think Nicholas is quite handsome, but my Annie gives him a growl and two barks for calling her canine self a feline! LOOL

Thanks for the kitty pictures! It does make one wonder, exactly what IS he thinking about whilst in those poses.

I wonder if he has some Maine Coon in him, that would explain his huge size. Or maybe he has been eating some ROUS's.......

I wish I were in proportion!