Remember that little cat we fished out of a dumpster? Would you look at her now. 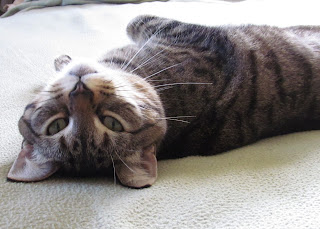 She's been renamed, of course.  She was originally "Scruff." But that only lasted as long as it took our Good Vet to discover she had too many nipples. Then there was a host of ridiculous suggestions about what her name should be. Despite all the pleadings we simply were not going to name her "Nipples." You know who you are.

We settled on calling her Itty Bitty Kitty With Too Many Titties and yes that was the least ridiculous suggestion of them all. Pretty much we just call her Itty Bitty. Or It Bit... or Bitty Boo.

Itty Bitty is our smallest cat - even smaller than Little Mo. At this writing she is tearing around the house - chasing Pepper I think. Or something imaginary. You know how cats are.

Integrating new cats is tough - much more so than dogs who will just fight it out if you are lucky. But Bitty held her ground - even with Nicholas who is twice her size. Given the chance she might even take on Gato Diablo, our notoriously crazy basement cat. But we aren't giving her that chance.

Nope, pretty much Bitty Boo just lays around being cute and doing cute things. That's our gal. Pretty good for a dumpster cat wouldn't you say?

Posted by Ohiofarmgirl at 10:36 AM

Yay for Nipples, I mean, Bitty Boo! And Yay for kitty pictures :)

Evidently finding a kitty is going around,hubstead found one too and brought it home.I got a picture of it on my blog lol.

Ah what a sweetie, reminds me of my cat Anya...

Little Mo was in a state of shock, he had never been in a situation like this before and he wasn't sure how to act. Shine wasn't as diplomatic, he in fact was smiling and unable to conceal a rueful smirk.

They were both listening to Nicholas complain, which was somewhat normal. What wasn't normal was that Nicholas was speaking while sporting a swollen eye and missing a few whiskers from the left side of his mustache. Seems he was on the losing end of a run-in with "Bitty Boo".

"Just because OFG did a post on that little minx doesn't mean she is now her favorite! She will do a post on me soon....with a picture too. I'll see to it!"