Yesterday Nicholas couldn't get out of bed. After a while I went looking for him and found him as such: 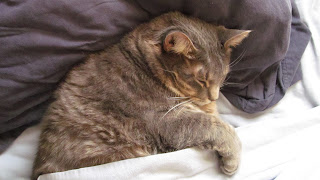 "Why aren't you getting up, little buddy?" I asked. He barely even shifted his eyes to look at me. I could tell this was gonna be a hard, hard day. 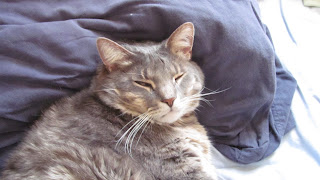 Yesterday nothing but unhappy looks.

Apparently Nicholas got up early and watched the CBS Eye Opener where he learned that not only is the sequestration impending... but that after one vote mid-day on Thursday most of the House members were heading out for a long weekend at home.

He verily wilted after he heard about furloughs and lay offs but the crushing blow was when they talked about the food inspectors being sent home and the impending famine in the land.

"There isn't going to be a famine, Nicholas." I told him. For the record, Nicholas is not going to be the first to go when the hunger comes. 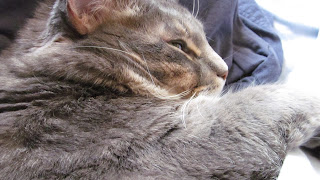 And a lot of deep thoughts...

I hauled his carcass out of bed, threw him over my shoulder, and walked down the hallway....all to the sound of his violent protests...which were really just him huffing at me.

In front of the window facing out back, over the pond, I dead lifted Nicholas up as high above my head as I could hold him.

"Now what do you see, Nicholas?" I asked.

My arms were starting to fail under his enormous weight so I set him down on the counter so he could consider all of this.  "Don't you worry, Nicholas. Everything is going to be just fine."

"But what about all of those people who are going to lose their jobs?" He asked.

"The sequestration is a sucker's game, Nicholas, there are going to be no winners here. Real people are going to be hurt by this whole thing. It's shameful no matter how you look at it. Even if none of those predictions come true...and who knows what is going to happen... it's a terrible thing to churn out so much fear, uncertainty, and doubt."

He was still muttering about the emotional fatigue of living under one crisis deadline to the next when I set him up on the couch to watch something funny on 'The Hulu." But at least he was out of bed.

I gotta tell you I'm damn sick and tired of riding the crisis roller coaster also. But I feel a lot better about our position knowing that if food prices rise or bacon is scarce we've already got most of our bases covered.

Most of the time people make fun of us for having our funny little farm. They can laugh all they want but what we have for dinner isn't going to be determined by whether or not a food inspector was on the job that day. If any of those knucklehead politicians show up here you can be darn sure I'm not feeding them. They can just serve themselves up a double helping of their own sequestration and chew on that.

Nicholas has had enough of this sucker's game. It was a hard day for Nicholas alright... the eighth of such.

With all the feral hogs rampaging around, how can we even worry about a bacon shortage? Relax, Nicholas..at least you're covered! :)

Now don't you fret Nicholas...your momma's got this covered.

Thanks HDA - we've got Nicholas covered all right. He's still sulking today tho.

I'm tempted, really I am.

I had a great day, I survived my students again, and am feeling better! Spring is here, supposed to be 60, for 1 whole day :) Happy weekend!

Nice to not be depenadant on the knuckleheads.

CC - you are giving me nightmares.

Nancy - hope you are still having good weather!

Dave, they are all a bunch of goofballs.

Is it bad that I understood more of the sequestration thingy when it was explained to a cat than I did listening to NPR this morning? I'm just going to put my head down and plant some seeds this evening.