Nothing happened yesterday. Or so I thought. 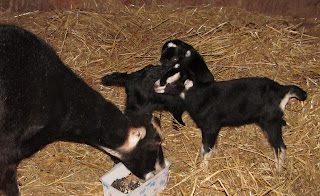 We got home late from church and I was supposed to take a sabbath... because, you know, not taking one is my worst sin.  But instead I was using a power-washer on the kitchen. I was gonna repent later.

At some point in the afternoon I tromped out to give some stuff to the chickens but it was way too hot to be out there. Like real hot. Like Africa hot. Tarzan couldn't take this kind of hot. So I leisurely called out to the goats, "Hey are you dead yet?" Not hearing a response I figured they were fine. I went back inside to the air conditioning.

Much later I went out to do evening chores and guess what I found? I thought Dahli was due next week but these little cuties made an early appearance. For heavens sakes.

From now on I'm gonna call Dahli "Sneaky Pete" - she had absolutely no signs of impending labor yesterday. In the morning she shoved her face in her food dish like every day and I thought that I'd work on getting her set up in the turkey house today...after I checked her due dates.

So there you have it. Two perfect doelings. They were up and walking around like they owned the place. No one was more surprised than me.

Happy Monday everyone! Anybody else got some surprise goatlings?

Awww, there is nothing better on a farm than a "Happy surprise" like that! Our "surprise" was 4 little American Guinea Hogs. She was 3 or 4 days early....or at least that is what we thought. Yup, we got our own "bacon seed makers" and can't be happier! Congrats on those cuties!

Wow! Gott'a love "no worrying, fussing, are they going to pop yet?" goat kiddings. And two doelings to boot! Congrats :)

Congratulation! What cuties. When we raised goats they always had their babies during the worst rain storms. Every time.

An oldie but goodie, D'Sophonisba! Zander should know that name very well.

Yes in fact I had a little doe waiting for me in the goat paddock upon coming home from work this afternoon. She was dry and nursing. No signs of pending birth when I left this morning--surprise, surprise!

At least she is good about getting it done on her own so you don't have to be further traumatized by viewing the event.