Does everyone read the SBCanning site? They have a terrific facebook page as well. One of the things I love about them is that they share their reader's canning photos. And they have great information. A while ago I saw something that made me stop and think about what I was doing wrong. 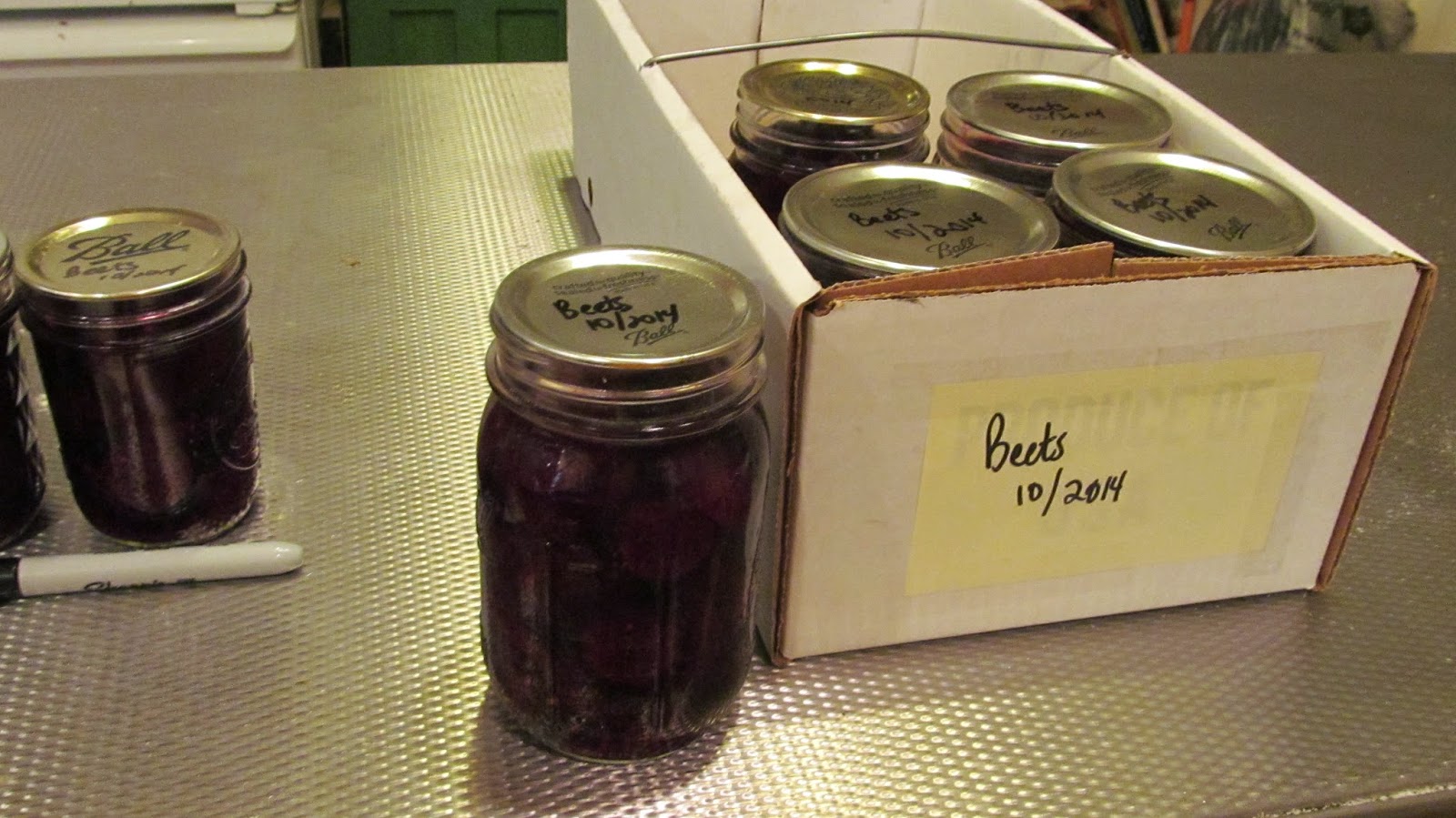 Some of my beets in a peck basket. Note the labeling and no rings - for safety.

The post was about storing your home canned goods safely. One of the tips is NOT to stack your jars. What!?! Of course I stacked my jars down in the basement... why not? Well, seems like there are a lot of reasons not to do this. Mostly because if the jars became unsealed the weight of a jar on top of them might reseal it once it was contaminated... or it would just sit there unsealed and stew a toxic brew. So it got me thinking I had to do better.

One of the great things about going to the produce auction is that if you buy a peck basket of something.. you get to keep the basket. So I've been using those baskets to organize my canned goods. If you look closely you can see that the quart jars are shorter than the sides of the baskets. I'm wondering if I can stack the baskets so that the jars are not literally on top of each other. I'll be working on this to see if it is an option. If not I'll be adding more shelves. 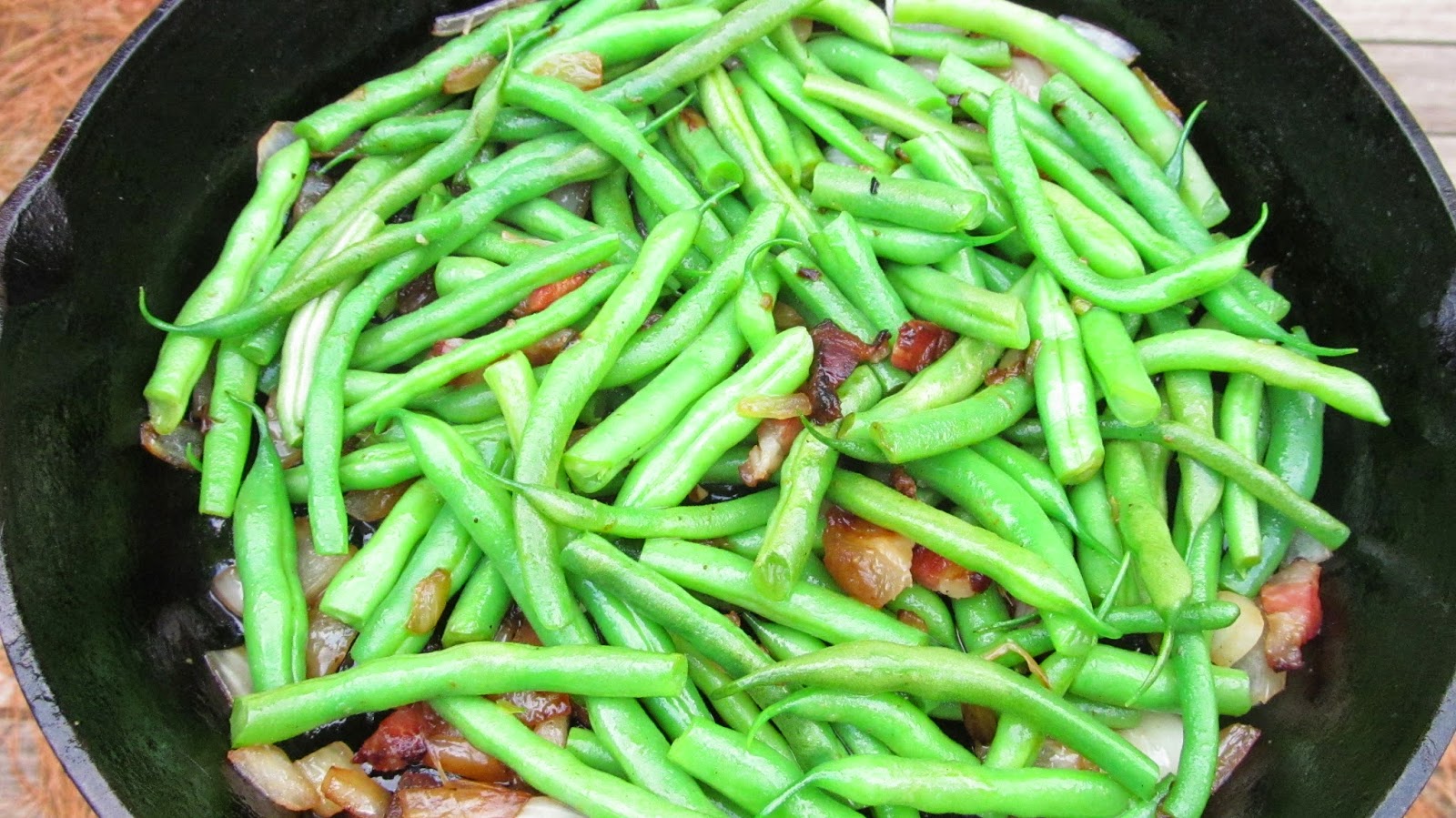 I risked life and limb to carry this hot skillet outside to get this shot.

But check out these babies. Totally worked. I have a lush harvest of lovely beans out there. Last nite we had some with dinner. Dinner was literally the very last pack of pork chops I found when I cleaned out the freezer. I also found a spectacular bag of smoked pancetta. Technically, smoking it makes it "bacon" but the flavorings were more savory. These beans were amazing.

Happy Friday everyone! What are your thoughts on stacking jars and are you taking up the last of your beans?

Posted by Ohiofarmgirl at 9:04 AM

I am glad to read this and am sending your link to all my friends who do lots of canning and probably stack the jars!
Your green beans look so good!

Strooth! I stack my jars because I don't have room to store them all. But I do really test those seals when they come out of the canner, and I always smell the jar when it is eventually opened to see if it smells alright, and I always reheat the contents to boiling point and keep it at that for at least twenty minutes before we eat the food, so I hope that this is safe enough.

But thankyou for making me aware of this potential prob, and will try and sort out a better way of storing the jars.

And good for you for cleaning out your freezer. I have been putting off doing mine! As for beans, we didn't have a crop this year, so will try again next year!

Wishing you a happy Friday, and a great weekend. Vx

You can stack the jars but you have to do it right. On top of each group of cans place a sturdy piece of cardboard or board then put another single group of cans above this one. this way they are not indie each other but on a sturdy surface. or if they are in say the canning box they come in one box can stack above the other. I heard this from a class on canning at the Agriculture Department. I really enjoy your posts. I grew up in south east Ohio right on the boarder of West Virginia and Pennsylvania. I loved it there. Sarah

A man who instructs in our canning class had his entire family killed when his grandmother opened a canning jar . She knew she had used the urgent instructions when she canned it. There was nothing there to cause her to worry except it smelled a little off so she put some more spice in it. They ate it. It tasted fine. Evidentially one of them later went to someone's house and told them of it. The rest stayed home. When someone came the next day they were all dead. That was a very sobering story to hear!! I can and will always can but it is a responsibility. Stacking the jars as I was taught helps me save was much of my work as I can. Even one jar that opens prematurely cause of being stacked on each other is a waste. :) Keeping the sturdy cardboard or the box bottom from the next canning box on top of the jars keeps the pressure off each individual can top. I don't mean to sound preachy just want to pass along the information I learned. I too used to stack my cans on each other. Sarah