Yesterday was amazing. I went on an epic adventure that involved "auction, adventure, and fried chicken." It was a day of days. It was probably the best day I've had in a long time. But first, do you hear that sound? Yes.... it's the sound of peace and quiet. I took some of those no-good extra goats up the livestock auction. Yes I did. 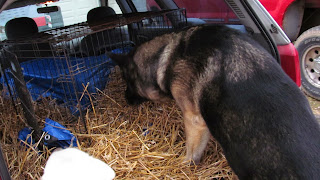 I am the reason we don't have nice things. Part 2. Not really an acceptable use of our "new" car. Bubby checks it out. There were goats in our new car.

Despite a long patch of weird things occurring around here - one really great thing happened to us. We happened upon a used car that was screaming our name. It was for sale at one of those "buy here, pay here" places not too far for us. We snatched it up for nothing.

Mostly I just couldn't take the stress and crying involved with trying to put Zander in my big truck. Our Bubby is 130lbs of "No, I don't think so" coupled with the vertical leap of as old, fat man with bad knees. He just couldn't get up in my big truck. So we needed some kind of easy-for-him-to-get-into wagon. And we got it. Then it turned into my husband's commuter....and then it fell to it's final disgrace.... that new-to-us-car became the Goat Wagon.

Yesterday day morning I loaded up the completely useless Darla, that little buckling, and the doeling and headed up to the Mt. Hope Livestock Auction. It is a long way from here. Of course, stupid Darla who has screamed every second of every day of her annoying life didn't utter one peep the whole way. I would not be deterred. There was no redemption. I kept driving.

Eventually the main roads end up in a rat's nest of small, hard to figure out smaller roads and I was completely lost. I tried following a guy who was loaded up with hay - I assumed we were going to the same place. But he turned quickly and I lost him! Fortunately my friends guided me by phone, turn by turn, until I reached the Mecca that is the Mt. Hope livestock auction. It was a frenzy and I was completely in the way.

Talk about a newb. There I was - gal in a pony tail, in a station wagon, with GOATS. They all rolled their eyes and glared at me trying to wind my way around all the "real" farmers. I very nearly got out and screamed at one of them boys that not only my truck was bigger than his, but I could butcher anything he had in his stock trailer. But I just smiled and waved...and tried to get out of the way.

Someone finally pointed me to the load-out dock and I backed in. A horde of Mennonite guys snatched the goats right out of the back of the car and before I even turned around those goats where gone from my sight. I didn't even say goodbye. The loader guys handed me a receipt and I sauntered away counting all that money I was fixin' to make from the sale. I'll find out next week how much when they send me a check.

Then I met up with my pal and one of my favorite farm kids. We had a terrific day. We drove around all over the country side and visited all kinds of out of the way places, we took Lehman's by storm, and checked all the roadside farm stand signs for beets. We found all kinds of good scores. Bulk food items, gardening supplies...and the fudge bar at Lehman's can't be beat.

We made our way back to check out the flea market and the auctions. The livestock auction was incredible. They had all kinds of stock - huge bulls, an enormous boar, tons of sheep, and some piglets. The packers were buying dairy calves for upwards of $400! Unlike our small produce auction this professional sale went fast and without a lot of arm waving. It was amazing.

They also had a poultry barn. I was under orders to come home chicken free.... otherwise I would have loaded up some of their 24 week old Golden Comets.

After our minds were boggled by the auction we headed directly to the world famous Mrs. Yoder's Kitchen. Oh yes...veni, vidi, vici. So much chicken.... it was delicious. Stunning in fact. Rookies load up on all the salads and stuff. Not me. Chicken, chicken, and more chicken...and maybe a few tablespoons of veggies just for show. I got my money's worth for sure.

When we got back to the cars we swapped farm gifts and I received riches that I am not worthy of... such bounty!

I drove home in the new car smelling like goat pee but deliriously happy at such an epic adventure. Now that I kinda know what I'm doing, and once I see how much the sale check is, I'll be heading up there again. While I might be tempted to drive my work truck up there to show them boys what I'm really made of.... that sweet gas mileage in our new little silver bullet makes it much easier to do that big drive.  I'll just have to dazzle them with my farm swagger.

Happy Thursday everyone! Are you going to the livestock auction?

Posted by Ohiofarmgirl at 9:34 AM

I envy you Lehmans. I live on the west coast and when I go to Ohio to visit family - that is the one plan that is a must go to. Somewhere in the farmlands of Ohio is a restaurant that is in a barn with a beautiful lake. If I could remember where that was I would go there the next time I'm in Ohio.

Every day. every. stinking. day. I threaten Pickles the Screaming Goat that I will ship her babbling butt off to the sale barn. I just want one, just ONE good doeling out of her and she is g.o.n.e.

Hope the sale check is everything you expected. Heck, just the silence would be worth it to me.

Hey is that a Focus wagon?? I had one for ten years and it was the best car I ever owned. We hauled everything in it!

hi seyrey! let me know if you figure out where it is... i will drive many a mile for good chicken!

Carolyn, i may have downplayed how happy i was.... ha! cant wait to get my fat stack of hundred dollah billz!

hi Laura! YES!!!! i rented one a long time ago and just loved it. this one is just as good as i remembered and is in terrific shape. well. was until i put the goats in it!
;-)