Back in the meat business! Finally!

Yesterday I ran right down to the Tractor Supply and got me a heaping box of peepin' fun - finally! We are back in the meat business! 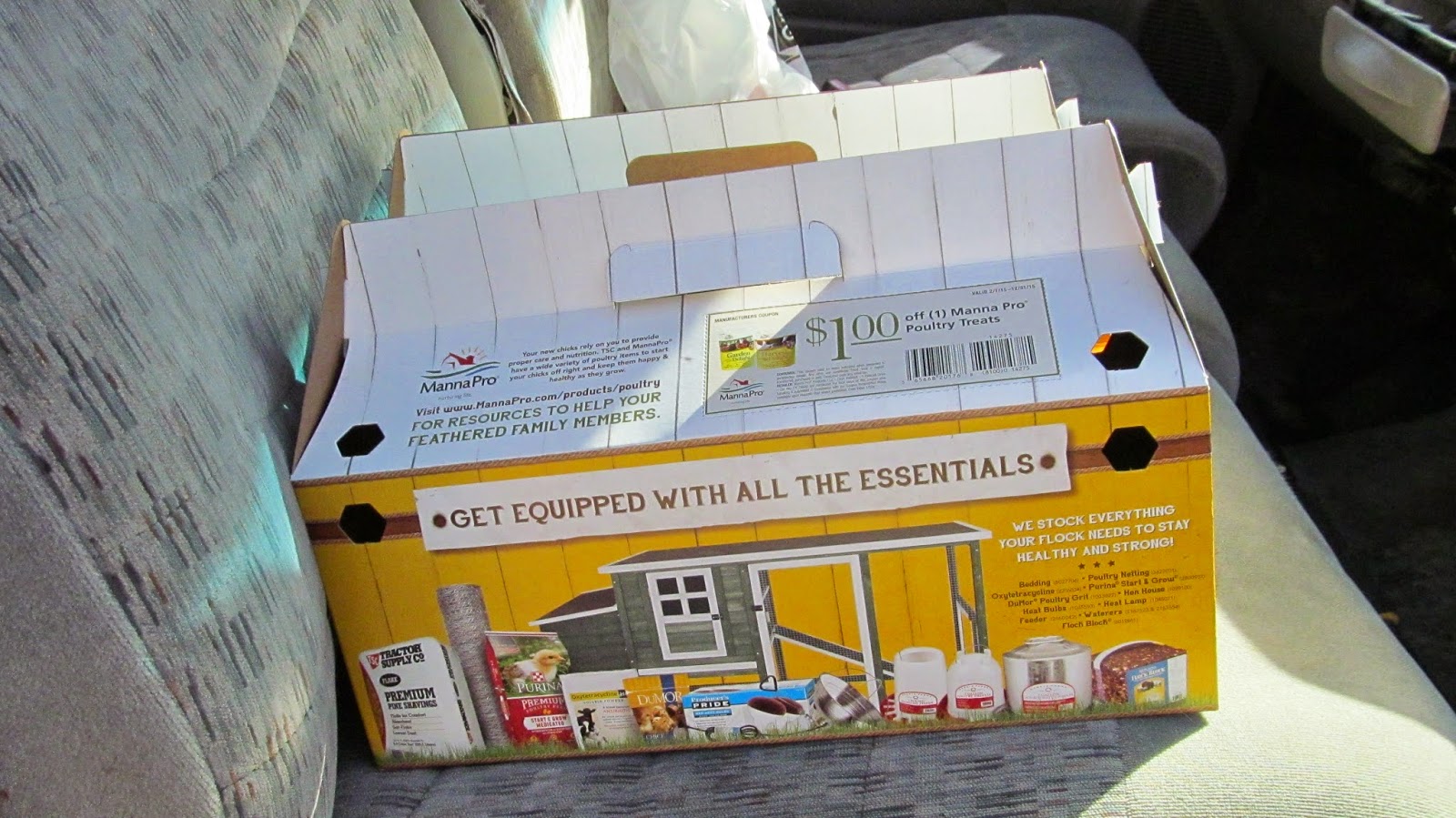 The chicks are put in little boxes. They rode home in the truck like this.

Mercifully, our weather really has broken - for at least the last 10 days - so mine eye was fixed on meat. Chickens that is... I need some creepy meats!

I spent the day cleaning out the garage so I could get the new peeps set up. Don't we usually start them in the house? Yep. But I just couldn't handle it this time and... we have a cat shuffling issue during the winter when we have the wood stove going.  So we needed to get the chicks set up in the garage.

It really worked out before to have them grow out in the garage. We set up a pen made out of hog panels. It's easy to scoot them outside to free range and it was mostly easy to get them herded up for the nite. Plus we didn't stink up the house...and they weren't tormented by the "real" chickens. So the garage is a good spot.

However, we've never started baby chicks out there. I figured with at least 10 days without snow we had a good chance to get them sturdy enough for if and when the cold weather comes back. So I sprang to action. 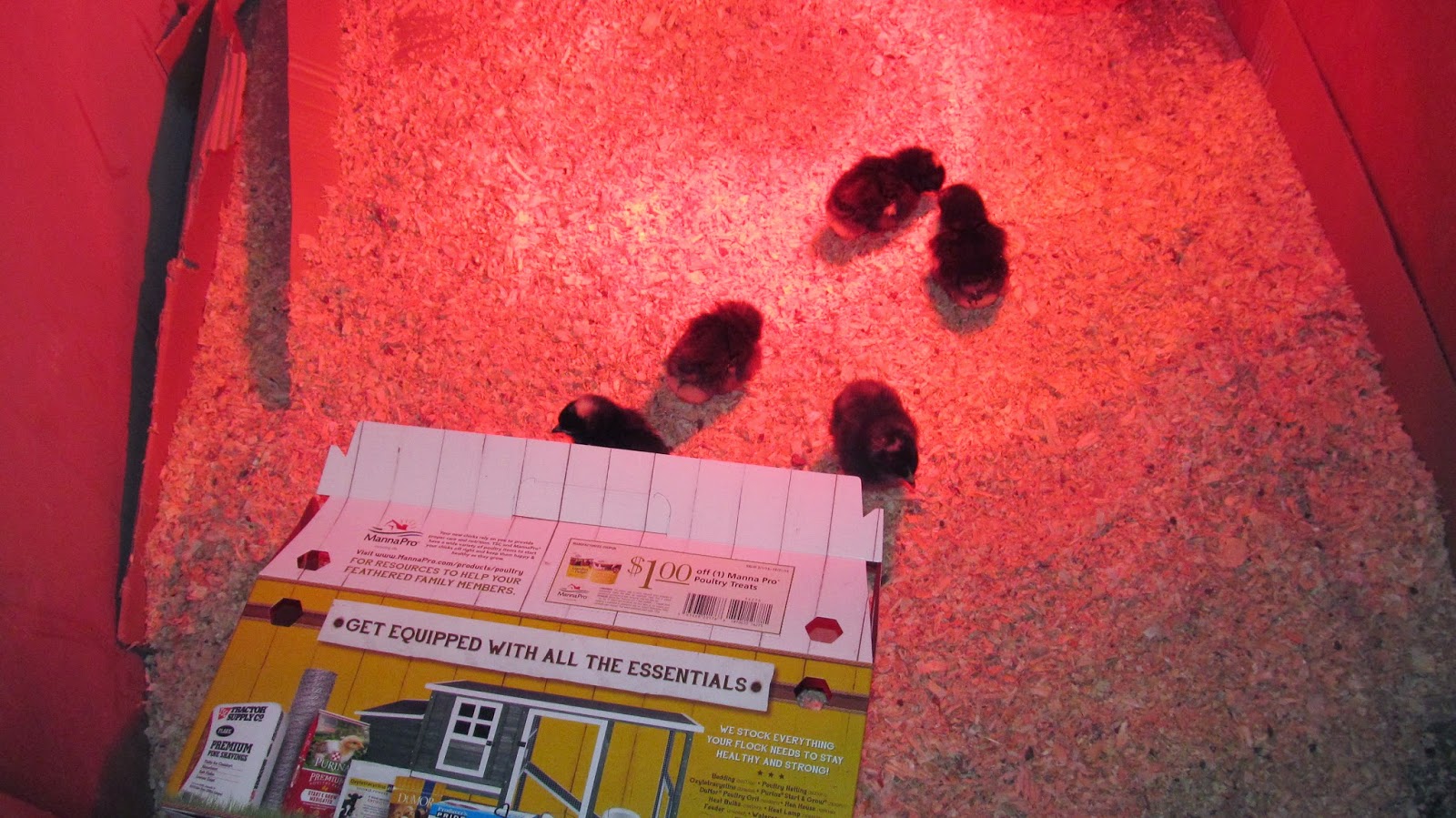 They cautiously explored their new world.

First step - the brooder. Last fall we were lucky enough to score one of those huge boxes that grocery stores get the pumpkins in - it's the perfect brooder. It is extremely sturdy, big and roomy, and it's not too deep so it's easy for me to reach into.

Why didn't we just order chicks? A couple reasons:
The pricing thing was weird tho. We were at a different TSC over the weekend and the price was $2.29... but at this store it was $1.99. We can't figure out why. Be that as it may - the price for 10 chicks the Meyer Hatchery is $2.25 so we totally scored.

Why did we only get 10? We are calling it a good start. We'll get another batch before Chick Days are over and that should get us thru the summer. Next fall we will do a much better job of managing our meat. As you know, we had a freezer fail and we lost the chicken we had for the winter. Then we had to buy chicken from the store... so we are extremely excited to be back in the meat business.

In addition to the creepy meats I also got 5 barred rocks. We need to get some new layers and these ladies (we hope) will start laying at the end of the summer.

So how do you buy chicks at the feed store? 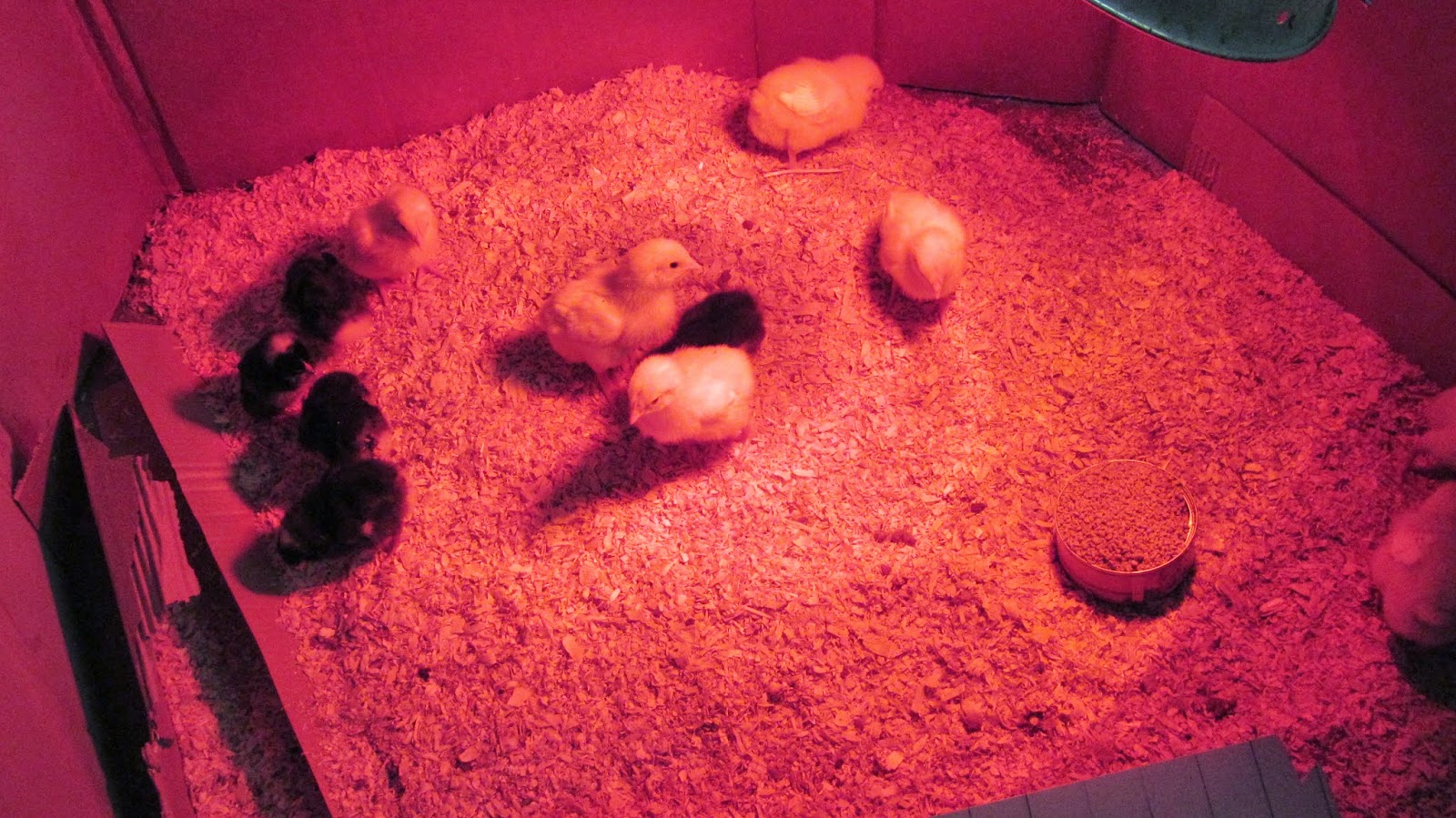 Remember that chicks can't regulate their body temperatures and they don't have real feathers to keep themselves warm. You want your brooder to be about 99*. So get a big box, Rubbermaid tub, stock tank, or kiddie pool set up with a heat lamp. Put your brooder so it's out of a draft.

Be sure to get a red heat lamp and not a clear/white one - all little creatures need a rest period at nite when you turn off the lights. But you need to have the heat lamp on them all the time. The red heat lamp let's them sleep. If you need it you can have a regular light on during the day. For instance we will have the overhead shop lights on during the day but then we will turn these off at nite so the chicks have darkness/the red light from the heat lamp. Some people also believe that the red light keeps them from picking at each other.

You also need some bedding. We like the "fine" type pine shavings. We know that TSC starts their chicks on this. So while we would initially put our mail order babies on paper towels for the first couple days - we know that this group is already used to the shavings. Never start your chicks on newspaper - it's too slippery and they might end up leg problems. The paper towels provide better traction.

Next, get your feed (20% chick starter) and your waterer set up. We always add a little sugar to the water the first day or so to give them a boost. You can get packets of additional additives but we knew these guys were probably in the store for a couple days and if they made it that long they were good to go. We also knew they were used to eating out of a feeder and we had a similar one ready. But we also like just using an empty cat food can for a feeder.

Heat? Water? Food? OK I was ready!  So I drove right down to TSC. It used to be that you could just pick out your own chicks but now they have the babies gated off and one of the employees has to get them for you. I laughed that they are required to us gloves to pick up the baby chicks... um.. I had been shoveling poo all day... so. You know. I guess it's all relative.

But it brings up a good point. Don't over handle your chicks, wash your hands after touching, them and for heaven sakes.... DO NOT SMOOCH THEM. Last year there was an outbreak of salmonella transmitted from poultry to people - probably from chick smoochers. And don't let your kids play with them either.

All of us out there shoveling poop know very well to wash your dang hands but I guess other folks don't. So now you know - wash your hands. A lot.

Anyway. The employee had a bit of a rodeo getting the peeps into the boxes but soon I had loaded up my cart with the boxes and proceeded to the chick... I mean... check out.

And that is all there is to it. The biggest problem is deciding how many and what kind you want to get. I talked to the gal manning the desk and asked her what the delivery schedule was? As with other years they just randomly get chicks delivered in the mail. There is no rhyme or reason - and they get all kinds.

Be on the looking out for the "special" breeds - you can find just about anything. I was glad to get these barred rocks - which are a favorite of ours - but I was really looking for some Buff Orpingtons...or maybe a Silkie or two. She said I could call anytime and that she'd be happy to tell me what she had in stock.

The only catch is that, in this state, they are required to sell at least six total chicks. You can mix and match them but there has to be six. Ducks and geese need to be sold in lots of six per variety. Why? Because that is  the fewest number that will likely survive. Remember chickens need to be in groups and baby chicks survive by snuggling together. Six together will generate enough heat to survive the drive home and such. Also they kind of learn from each other. One peep alone is a misery so they need to have little buddies so they can flock together. So the fewest that are likely to make it are..about six. You also have to assume some amount of attrition.

Do not be overly alarmed if you have some losses. It's sad - but normal. Depending on who you believe there could be about 15% losses or more - especially with creepy meats. Why? Because chickens randomly flop over dead in the best of circumstances. And then there is always disease, stupid mishaps, being too hot, being too cold, predation - a million reasons why you would have losses.

Your job is to limit these reasons, accept that there will be some losses, and do your best to get them grown out.

I checked on the little buddies this morning and they are doing great. I can tell they are good because when I went out to check on them they were popping around. They had an "equal dispersion pattern" meaning they were not in a heap, not over in one corner, not hiding directly under the heat lamp, or as far away from it as possible... but the chicks were equally spread out in the brooder doing little chicken things.

And I will be dreaming of chicken dinners....

I've bought chicks (just hens for eggs) from a feed store with mixed success. Several times I got the wrong breed. Now I usually drive out to a local hatchery, same price but better luck with the breeds. We do the same set up, but in a spare bedroom. Garage is too cold, even with the heat lamp. I buy mine later so I can get them outside sooner, so that works. I LOVE Barred Rocks, good layers and pretty friendly...

I like the way you talk about your animals (the non-pets). You don't skirt around the fact that they are future food, but you also don't sound like you're trying to outdo everyone else being aloof or without affection. I've read a lot of blogs, and the ones I consistently come back to are the ones that keep it real and humorous, like this one. I love the way you write. Please keep it coming!

Nancy, I can't tell if I'd like to be that close to a hatchery or not - yes it would be easy.. but TOO easy! I think I'd be there every day for the bargain bin!

Aw shucks. Thanks, Amanda. I guess I always just try to tell the truth about it. I think it became a "thing" to have a big emotional crisis over livestock but I think it's much more authentic to just call it like we see it. And humor always helps. *gives hugs*

I get all my hatching eggs from NPIP (National Poultry Improvement Plan) hatcheries to make sure they have been tested for various diseases. James Marie Farms in Louisiana test for a ridiculous number of diseases in their quail and I've found NPIP chicken eggs on eBay. No, I still don't snuggle them cuz quail are way too delicious for that. ;)