Fred the Rooster gets a booty call

So poor Fred has been sulking alone in the garage. The barncats don't make very good company and he's been hanging out in his cage under the heat lamp. But he was out pecking around a little bit tho so he looks like he's getting his feet under him.

So we figured it was time for a booty call.

I went and got Lil Buff off her perch (boy wasn't she surprised!) and took her in to him. He was VERY glad to see her. Immediately he perked up and got a little sparkle back in his eye -- and he showed her where the food was...we closed up the cage and they were snuggling.

Lil Buff is absolutely one of my favorite little hens. She's one of the Original Five and is a good momma. She's a little buff brahma, very small, and has a nice disposition. She always sleeps next to Fred on the roost so she was happy to see him. 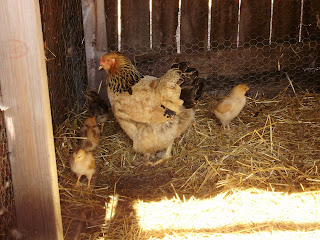 A couple summers ago Lil Buff had her first clutch. When they were old enough that she didn't have to be with them all the time, she would go in early and roost next to Fred (he always goes in first to the ladies will start filtering in). Later, after I got everyone into the hen house I'd separate out her 'kids' and herd them into their own coop...then I'd call to her “Buff - do you want to come and sleep with your babies?"

And I'll be darned if she didn't know exactly what I was talking about. She'd pop down and go right into their coop.

Lil Buff is one of the reasons why I like chickens so much. I can't help it, I just love her.

So does Fred.
Posted by Ohiofarmgirl at 8:43 PM

What a wonderful story about Fred and Buff. For all his bluster Fred really does seem to love his girl, and she him. If I didn't know better I would think that the Ohiofarmgirl has a soft spot for the bad boys, like Fred and OD .....

Some search for badness - others have badness thrust upon them....