Its a farm thing... you wouldn't understand....

Sometimes on a farm there are certain events... some “farm moments” that regular folk just wouldn’t understand. Well, here’s one for you. This happened a month or so ago.

We have this little Bourbon Red turkey hen named, Runner. If she hadn’t tried so hard to set a nest last year she surely would have ended up in the pot by now. In a word, she is ridiculous. Aptly named, she runs. Everywhere. And she is loud. At some point during this summer she was the only one of our 3 turkey hens not on a nest or brooding a clutch. So in her loneliness she screamed. For 3 weeks straight......


She is also a raccoon magnet. Seriously. Twice after she actually sat down on a nest she was attacked by raccoons. Those varmints are no longer with us I assure you, rest their souls. And thanks to guns that go boom and traps paradoxically named “have a heart.” Hum…

Anyway on her fourth try to set a nest, and after the second raccoon attack, we barricaded her into the Fort Knox of all turkey houses and…. Nothing. All her eggs died or were killed. We finally took her up, washed her off, and tried to recuperate her as best we could. It didn’t go well. She was weak and miserable.

And we couldn't integrate her back into the flock. She had been the Number One Turkey Hen... but in the time that she sat on this last nest she lost all her 'street cred' with the other hens. She'd have to fight her way back to the top but she couldn't defend herself. So we let her be next to, not with, the rest of the folk. But even tho she was separated from the others they managed to grab her thru the fence and beat her up. I ran out and saved her from the assault.

Carrying her to safety, bloodied and sulking as she was, I realized that I had broken our cardinal farming rule (Don't Snuggle The Livestock!) and I fell in love with her. She tried so hard to hatch a clutch and was really a trooper. I put her in a broody coop in the hen house and said good nite.

The next morning I went out to check on her and to my horror I thought she had been attacked! She was mostly bald and there were feathers everywhere. To make it worse, it was one of our colder nights and she was standing alone, on one foot, shivering. That poor little dear. I quickly determined that she was not attacked but her feathers were falling out in handfuls. Not gradually like molting but falling off her like leaves.

So I did the only rational thing I could think of. I scooped her up and ran into the house.

You can imagine The Big Man’s surprise, however, when I burst into his bathroom, threw open his shower door, and shook that poor little hen at him and said, (well kinda screamed):

OHMIGOSH LOOK AT POOR RUNNER WHAT ARE WE GOING TO DO!??!??!?

I can only guess what he was thinking when, thru soaped up squinting eyes, he saw me standing there in muddy barn boots, barn wear, and shaking a quickly de-feathering turkey hen at him.

He calmly advised me to please close his shower door and he would join us in a minute.

I’m telling you there is never a dull moment. And not really a good way to try and explain this to someone ‘off farm’ but there you have it.

Runner, by the way, seems to be doing better. In fact, she is totally on the mend. She grew in most of her feathers and is now the queen of the hen house. She keeps the chickens in check while strutting her stuff. She's about to go back and join the turkey crew - but in a day or two. I just love her. And...she's laying eggs! In the middle of winter! Crazy turkey hen.

Here she is at her ugliest. That is one ratty looking turkey: 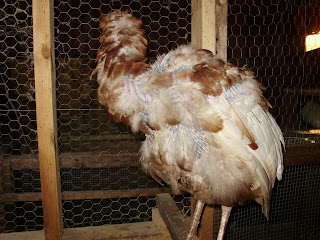 Posted by Ohiofarmgirl at 10:05 PM