Well, today we had a barnyard drama. There was a no holds barred, cage match between our old rooster, Fred, and the newer rooster, Big Pansy. It was downright ugly. 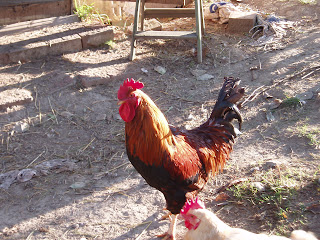 Fred was one of our original five chickens and has ruled the the barnyard from Day One. He's a big-plumed Welsumer with a bad attitude and huge spurs.  Fred and I have never gotten along. There is open hostility and from time to time I set the dogs on him. He once mauled one of my sister's kids. And I'm fairly certain that someone (ahem) pawned him off on us because he was so mean and because we don't have kids..

Originally Big Pansy was supposed to be named, Mean Joe Green – he's a huge brahma.. I mean he is HUGE so we figured... you know, that would be a good name. And frankly I was looking forward to someone to take on Fred. 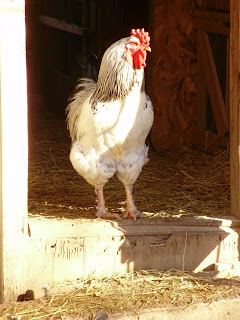 The within 5 minutes of being turned loose in our barnyard our littlest hen... a BANTY.. chased him. And he ran. So, well.. he became Big Pansy. And for all you Soprano fans, yes, thats the G-rated name for the character who got whacked in the first season...if you take my meaning.

So, Big Pansy and Fred got into it - bad. Really bad. They had been challenging each other for the last couple days and I had to send in my enforcers (the dogs) to break it up a few times... but wow. I found them both in a heap in the corner of the hen house this evening when we went to feed everyone.

I yelled for The Big Man to come running and bring gloves. Its never a good sign when someone yells for you to 'bring gloves' in a barnyard.

Back to the scene of the crime....

BP was covered in blood - not his own - but he slowly got up from the sickening chicken heap and stumbled off. .... and Fred was still in a heap....and he was in a heap.. come on, Fred... get up.... drat. He didn't. So The Big Man gingerly picked him up but he came around, alive, but he was covered in his own blood. Totally beat to heck. It took about 15 minutes to wash him off.  When we got him cleaned up we saw he has bad lacerations on comb and face and there was blood caked around eyes and in mouth. Ugh.

So, Fred is in intensive care (OK a cage in the garage) with lots of straw, high protein food, vitamins and molasses laced water.. If he make it thru tonite we think he'll live.

I don't especially love Fred – he's been my arch nemesis from day one.... but thats no way to go.

Poor Fred. Here's hoping for you, big guy.
Posted by Ohiofarmgirl at 4:28 PM

Hang on Fred, maybe after you recover you and BP can team up and teach the Gander a lesson.