How To Render Lard

How to Render Lard

Want your own non-chemical-ized lard? Its easy! But first, a bit of a primer about hog fat:

There are two kinds of fat on that hog... the normal marbling and fat under the skin and around the cuts of meat....and the 'leaf' which is in the body cavity surrounding the organs and such. I do not know why, but the 'leaf' fat makes the most smooth, creamy, and heavenly lard so you want to keep that separate and use for baking.

Even tho the leaf is the best for baking...  the regular ol' fat does a fine job and you can use it for frying, for making a big ol' dog food omelette (like I do for the hard workin' farm dogs), or even in crusts.  It has a 'heavier' more distinct taste but I find its great for quiches and such. The best use of lard that I have seen, but not tried myself, is by the Amish ladies who fry donuts in it... yummmm......
Back to the “how to”:

Step 1: Go out and kill your pigs and dress them.  What?  Don't have pigs? Ok, we'll cover that later. What? Don't know how to dress now-dead-pigs? Oh golly, I'll queue that one up also. But if you really don't have pigs... check around for a local butcher who is willing to give/sell you a big ol' bag of pork fat. Got it? Onward.


Step 2. Trim the fat from your big hunks of meat that your are cutting and wrapping.  Remember to keep the leaf lard (heavens open... angel sing) separate from the rest of the fat. We put the fat in big tubs or in baggies in the coldest fridge we have.  For us that's the beer fridge. Also known as the 'just dressed meat' fridge. We keep it extra, extra cold....like turned down to “Coldest.”  And yes we know its sucking up the electricity but it cools the meat quickly and keeps everything longer.  You can't keep the fat there forever.. but maybe up to a month?

Step 3:  Clear your schedule for the day.  Seriously. We are going to cook fat all day long and if you leave it or walk away or drive away you'll burn down your house. Clear schedule – check! Now break out your biggest and heaviest cast iron dutch oven or kettle that you own or can borrow. Go and get your bags of fat. And a sharp knife.

Step 4:  Cut fat into uniform pieces - about 1 inch or so. Be careful! Don't sustain a lard related injury like I did.  I've read where you can grind the pork fat instead of cutting it. Whatever. Just cut it up and put it in your heavy kettle or cast iron dutch oven.

This is what it looks like when its starting to get all melty: 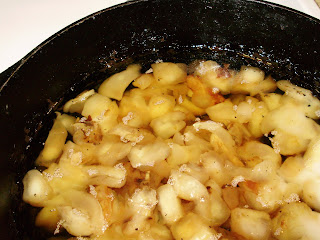 Step 5:  Put uncovered kettle in a slooooooow oven - golly.. maybe 200 - 225* for hours until all the fat has been liquefied and there are pieces of crispy stuff floating on top. You don't want it to boil – barely a little simmer.. sure. But really you just want it to get melty.  Remember that your primary goal is to have lard. You're secondary, but no less important, goal is not to burn down your house.

Step 6:  Turn off the heat and cool until you can safely work with it. And then go and get your two Ove-Gloves so you can carefully remove the kettle from the oven.

This is just about done. See that there are some larger non-melty pieces.. Give a gentle stir until all the pieces are crispy. 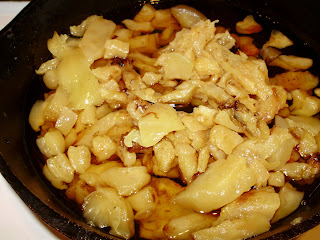 Step 7:  CAREFULLY pour out the liquid fat thru cheese cloth to strain and remove the sediment and the big chunks. I think I had to strain twice for one batch...remove all the little grimy bits. You can use the cheap grocery store cheese cloth for this – just fold it over several times. Its easy to strain into a pourable container - like the glass measuring cup with a spout. 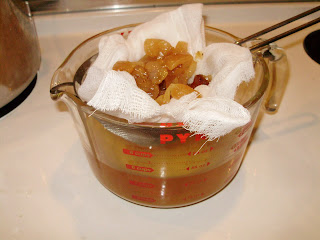 Step 8:  Tub it up - I like those Gladlock containers. Then leave them to cool. When lard is completely cool it will turn from the golden liquid into a creamy wonder. I keep my lard in the freezer.  Apparently you can just keep it in the fridge or even in a cool dark place but I don't entirely trust this way. The other great thing about having it frozen is that its extra cold when you are ready to make a pie crust or some incredible pastry. 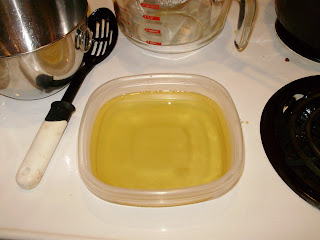 *  Some resources say to add a little water to the kettle... I'm not sure what good a little water would do so I never do this.
* Don't be too over-zealous in trimming the fat - if it has little pieces of meat or whatever just toss 'em in. They will separate from the liquefied fat just fine.
* You can also do this on top of the stove over a LOW heat. I'm not sure I would do this unless you trust your stove with your life. Remember – don't burn down your house!  I trust my stove completely, but I have oh... 157 over-interested cats in the house that I didn't want to end up deep fried so I prefer the oven method.
* Some people think it smells up the house. I don't! If you don't like it you can cook it outside, I imagine, or open the windows. It does, in fact, smell like rendering fat. But that just makes me dream of donuts.....
* The crispy floaty stuff, I believe, are 'cracklins' which some people eat or use in corn bread. I use them or don't eat. But my hens love them! Wow!  They really go for them! Since I make about 6 or 8 batches of lard each time I keep the bits and fed them to the hens over the course of the winter. It really seemed to help keep them warm and full on our coldest days.
Posted by Ohiofarmgirl at 2:14 PM

Hi Ian! And welcome - the only thing better than having your own pig...is having a neighbor who does
;-)

You can check with your local custom butcher - they might have some pig fat for you. Remember the stuff in the store has stabilizers and stuff, no one wants that. Ick.