I was never really a dog person until I moved to The Good Land. One look at how remote we were and instantly calculating that a 911 call was going to be a good 20 minutes away convinced me that just maybe some big ol’ dogs was just what I needed. It should be said that The Big Man has always had big dogs and he’s a pretty alpha guy so I didn’t have any qualms about getting ‘too much dog.’

We were also of the same mind on how to raise them. For a full overview of our training regiment just pick up a copy of The Monk’s of New Skete’s book on German Shepherd raising, How to Be Your Dog's Best Friend: The Classic Training Manual for Dog Owners (Revised & Updated Edition)

. We like dogs. Not accessories that you put little sweaters on or carry around in a purse. Dogs. Big, working, dogs.

I planned on getting two mostly black, female German Shepherds with unusual names like Zayne…but what I ended up with were two MALE German Shepherds who are all white and have the most common names ever. For heaven’s sakes…


We knew that Titan (“Ti”) would be big. The story was that his grand-pappy (grand-puppy??) was an original junkyard dog weighing in at 180lbs. Massive! Then Ti’s father was about 120lbs so we figured Ti would come in over a 100lbs and he has not disappointed.

I got, and still get, a lot of flak from some people who don’t understand why I wanted a BIG dog. I tell them its just like firearms… sure you can get the job done with a .22 but why not use the 9mm? Sometimes “shockin’ y’all” in a damn fine strategy. Nothing stops ne'erdowellers like a hundred pounds of mouth and teeth that don’t back down. Can I get a hell yeah?

Ti has a huge mane and wolf-like eyes and oh... when he hits that shepherd’s trot… a vision. And he’s an extra good dog. One of those that reads your mind and does just what you want – you know the kind. Too smart for just spoken commands we had to move to hand signals (mostly because I can’t whistle) and now I’m teaching him to follow my eyes.

If I stood here all day I couldn't tell you all of his deeds of valor or bravery. I. Love. That. Dog.  His main job is to guard me. No one gets out of the car if they drive up unexpectedly with Ti on patrol. And I trust him entirely.

For the first year it was just Ti and I…and Shady, The Big Man’s century old heeler mix. She has one eye and a bad attitude. A good hunter in her day she mostly just gives me the stink eye and sits on her bed quietly in her dotage.

Then one day we got a call that one of Ti’s littermates wasn’t doing well with the family who adopted him. They said he was a ‘bad dog’ and ill behaved. A sucker for lost causes, and needing a friend for Ti, we agreed to take him. We couldn’t believe Lucky was from the same litter. Thin and waifish, long legged, with one ear that doesn’t stand up straight, Lucky is the polar opposite of our monster dog. While Ti, like a tank, storms across the yard… Lucky high-steps on feather light paws, almost always chasing a butterfly.

And he’s wily like a coyote. Lucky looks like a coyote. The Big Man and I just shrugged and said we’d do our best. We waived as the family drove out of sight….

…then immediately turned and wrestled poor Lucky to the ground. And we did the same thing every day for two weeks. Lucky was, in fact, a problem child – food aggressive, he counter surfed, didn’t know any commands, jumped up on me…the whole obnoxious dog thing. But he soon learned that if he peed in the house the other dogs and ALL the cats would make fun of him; if he snarled over food it was taken away; if he jumped up on me he would be wrestled to the ground, and if he set foot outside the ‘dog zone’ he would be snatched up, marched back, and told to ‘lay on that bed’ with The Big Man standing over him. He learned who was top dog and that he was part of a pack. Within a month we had that dog turned around. After another year we had a workable working dog.

The two dogs help me with the farm and there is no way I could get my work done without them – its like having a couple extra hands. In the morning I head out with the dogs on my six.

Well, technically at my five and at my seven. Ti, my right hand man, and Lucky is my “leftenant.”

I send them after stray hens that are late coming in for the nite, order them to ‘get that rooster’ if I get flogged by my arch-nemesis Fred the Rooster, ‘watch the gate’ so the goats don’t get out, and together we have battled that demon gander I don’t know how many times. And as I may have said before, I never get near those hated pigs without my stock cane and the dogs with me.

They saved me a couple times from past pigs. Once when the pigs got out I sent the dogs out to ‘get those pigs’ and ‘bring them to me.’ With military precision the dogs raced side by side up the hill in hot pursuit of the runaway pig, they passed that pig on either side, and crossed exactly in front turning him, and then herded him back to me. The problem was, however, now I had almost 300lbs of pork charging right at me!

“Guard momma!” I cried.. well, at this point I shrieked it and then whirled my stock cane like a Bet’leth and figured that today was a good day to die… but Ti grabbed that out of control pig by the ear and got him rerouted to where The Big Man could herd him back into the pen.

Folks from my old life still can’t believe that I’m such a ‘dog person’ having spent most of my life preparing to be the crazy cat lady… but we three musketeers are a good team. And heaven knows that I couldn’t get these cats to do any of the farm work! I’m pretty sure the rooster wouldn’t be scared of the cats – even if they did viciously treat him with casual disregard.  No, what you need for a well run barnyard is a couple of good dogs. 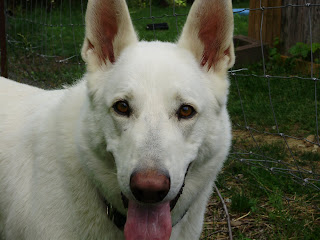 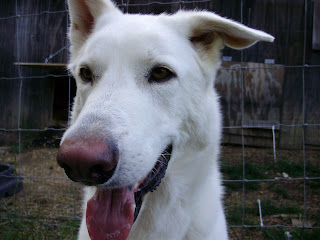 Posted by Ohiofarmgirl at 5:38 PM

I really like your writing. I have read your last three posts and we are rolling in laughter at the Homestead to be.

Great post - I LOVE those pups! I'm so happy you took in Lucky. I firmly believe there are no bad dogs, just bad owners..... I can certainly see the white shepherd in our Diesel. I believe his ears are probably from a little bit of lab ancestory - but his eyes and nose look very, very much like your pups'. Diesel is more like Lucky, and Dolly is definitely more like Ti. She has taught herself dang near every command she knows. She. Just. Knows. I said sit about 2 times, and she sat. When Diesel doesn't want to climb the steps back inside (hip dysplasia) we say "Go get Diesel" and she just runs down there, nuzzles him, and he follows her up the steps. And she just always knew what we wanted! Don't you just love that? Your pups are just beautiful.

YES! I totally love the dogs - even when Lucky is being a goose. Ti is just amazing...it makes it so much easier to get work down when I can just tell them what to do...and I don't even have to turn around to see if they are doing it. Love the name "Diesel" by the way!

The white shepherds seem to have a bit of a mishmash of stuff in them...it was just a fluke what we ended up with them but wow...so glad that we did.

Wow, so interesting to see what a difference their puppy life made. I see so many dogs for giveaway around the 10-12 month mark, when they are too old to be cute and completely unmanagable if not trained. I'd love to get a rescue dog, but you really have to start again (and obviously you can if you have to) but its easier to train a puppy right from the start!

thanks Liz, and yeah... all puppies are cute. they can be tough in their "teen" years. sometimes we wonder what Lucky would have been like if we got him as a baby. but he's our goofy guy now.
:-)