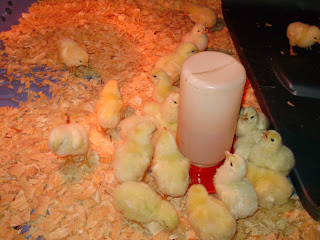 We were thrilled when the post called us on Tuesday morning to come and get our heapin, peepin' box of fun. Actually we thought they'd get here Wednesday so we had to scramble to get the tub and the heat lamp set up for these 30 little dinner chicks.

About 10 minutes after getting the chicks set up in a brooder I left to spend 24 hours in civilization. I watched cable TV and went to the mall. Can you believe that there is an entire channel dedicated to cup cake competition? I was mesmerized by the whole thing.

I have to remind myself that the rest off the world isn't as farmy as I am. Someone asked me if I had horses and I replied, "No we have real farm animals." I probably should have said that differently. And the server at the restaurant was a little green around the gills when I ordered a steak and explained my selection to my friend as being because "We don't have a cow to butcher yet." Kinda like our experience at IHOP but not as bad.

Anyway, when I got home I got the kiddie pool set up as a brooder for the meat chix. They are doing great so far and are starting to eat like a plague of locust. Meyer sent us one extra chick in the box....which promptly died yesterday. So started with 31, now down to 30.

One of my pals took advantage of the 50-chix-for$0.80-deal but wasn't having good luck with them. Of the original 50 about 10 had keeled over. As you know meat chicks aren't known for their steadfastness and can be kind of tricky. My pal asked for suggestions and this is what I said:

1. Make sure they are warm enough - for that many chicks you might need two heat lamps. Also be sure they are out of the breeze.
2. Got raw milk? Give it to the chicks - you can mix with their feed or just put it in a little dish.
3. Adding a tablespoon of Apple Cider Vinegar (ACV) into a gallon of water also helps
4. Add a little molasses to the feed or water (you can stir it in with the ACV)
5. Boost up the protein - get a bag of higher protein food (wild game feed or TSC has 24% Chick Starter) or give scrambled or hard cooked eggs.

Or if all else fails you can get either medicated feed. TSC's Dumor brand is not medicated which is why we like it, but there are brands that are so ask at your feeds store. I picked up a couple packages of something called "Sav-A-Chick" which is a "concentrated poultry electrolyte and vitamin supplement for use in drinking water."

We found that its easier to keep meat chix warm than it is to cool them off. However, you need to be on the lookout for signs they aren't handing the cold well. You're chicks should have a good "dispersal" pattern - that is they should not all be bunched up under the heat lamp, nor should they be as far away from the heat source as they can get.

The chicks should be evenly popping around in their living area - or laying down asleep with a little space between each other. You should also hear them "musically peeping" which is a happy sound that you'll know when you hear. If there is distress peeping run, don't walk, to make sure no one is stuck upside down the waterer (it happens) or that they are not too cold, too hot, or out of water. So far ours are doing well in their new digs.

As this group was hatched this week of Oct 24th... they should be ready in mid-December. Our plan is to do a better job of "dressing them for dinner" in small groups of 3 or 4. And seein' as how we are almost completely out of chicken.... I'll be counting the days.  Until then my eye is fixed on the pigz... who's special day will be coming soon.

Happy Thursday everyone - anyone else get the special price from Meyer?
Posted by Ohiofarmgirl at 9:32 AM

Creepy Meats! I hope you don't lose too many! I'm not ready to try them out yet, but in the near future I may.

They are the cutest! and probably be the tastiest come December..I really envy you..wish I could have them, I don't think I'm praying hard enough and maybe I'm just too ill and somebody else knows it besides me :o( Ugh!
Good luck with them..

How funny, we just returned from the butcher today. We harvested 19 kosher kings. Yes we lost a couple along the way too. Can't wait to have chicken again! We've been out for a few weeks.

They sure don't stay cute for long, do they? Dirty, but yummy, mess makers.

Autumn - At first I didnt like them at all but now I'm thinking they are a pretty good deal.

Hi Ginny! I have a funny story about your "real" chick - I'm going to try and catch her today to get a picture. I'm not snuggling these meat chix - but I'm gonna love them in a couple of months!

Great work Jody! I thought we'd just forget about it this winter.. but I love having chicken also.

They are little pot pies! Ha! Thanks for the laugh, Carolyn!

They'll start to stink here pretty soon - but for now they are pretty cute.

What an interesting post! We have been exploring different ideas for the little hobby farm we just purchased, and have been debating about whether or not to dive into raising chickens for meat.

I have a habit of naming fuzzy little animals, though... probably a habit to kick before deciding to raise animals for slaughter!

hey PC! I've got a couple more posts on the "creepy meats" - the good and the bad points. We find they are too un-chicken-like to name... and we love raising our own food.
:-)