Full Moon of the Crazy Goats

Nutbags. Loons. Crackpots. Is everyone glad that the Full Moon of the Batsh*t Crazy Goats is over? 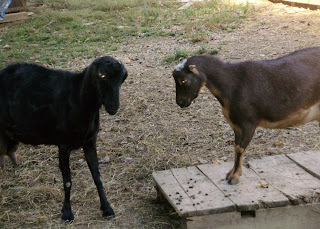 My golly.  Its been a wild out there in the barnyard. I don't believe in astrology but I do believe that natural forces can affect behavior. You'll know this to be true if you have animals, children, or work with the general public. I tend to remind my city friends that they might want to wait a day or two around a full moon before they quit their jobs, repaint the living room in hot pink, or radically change their hair.

We've noticed that our barnyard gets more lively in weird ways around the full moons - especially when it coincides with the change of seasons. Any poultry setting on nests tend to hatch during or around the full moon and we also know there is more predator activity.

The introduction of Too Short has thrown an already lively group into fits for sure. And all the lady goats are trying to kill each other. Debbie especially has been on a tear lately. During the last full moon she was in rare form. My normally placid, well behaved doe was out of her damn mind.

All y'all know that I'm not a goat snuggler. Or a goat smoocher. In fact I don't spend a lot of time with the goats and I only really require a few things from them:

1. Milk. A lot of milk. And for the goat to stand there quietly when the milking is happening. I'll give them whatever snacks they want -  just stand there and lets get the milking over with quickly. And that goat had better fill the bucket.

2. Come when I call you  - which is almost always when its time to milk or, on occasion, for some special snacks.

3. Be QUIET. I don't have the time or patience for loud obnoxious goats. Which is why I like the La Manchas and probably will never have a Nubian despite the fact they fulfill Goat Requirement #1 very well.

But the Full Moon of the Batsh*t Crazy Goats sent poor Debbie into a tail spin for sure. And there was me - out there working on the evening chores alone. Debbie had let the lunacy take hold and we were in for a bumpy ride. She started working on  my last, frayed, good nerve as soon as I saw she didn't have any milk. Dahlia had been milk stealin'. But I needed to empty Debbie out and made sure she got some grain. So I called her.

She did not come to me.

Just so's ya know... "not coming when I call you" - for dogs and goats - is a pretty bad offense. In fact, the dogs know that if they dont come to me by the time I've called 3 times... or heaven forbid, I have to go and get my shoes on to go find them... they'd better run FROM me.

Debbie stood there giving me that smarmy look. Not coming to me. OK.  So I picked up the leash and went after her. She ran, tossed her heard, and thought she was something else.

A moment later I was hot stepping that goat directly to the milkstand at a fast pace. Debbie was on a short leash and had a slightly wild eyed look.

Then... THEN.... she wouldnt get up on the stand. And Debbie was stomping all around! Right by all my little ducklings, my sweet little duck momma, AND one of my setting hens! I thought that goat was gonna stomp on my hen! So I growled at her to "Get on that stand or I will end you right now."

She got on the stand.

There was a slight wrestling match over whether she was or was not going to put her head in the stanchion. It turned out she was. But she stood there defiantly, snorting and not eating.

Then when we were done she pretty much she ran right back to the gate, and once inside the yard she did that crazy bucking, twisting, flipping, and kicking up her heels thing. Fine. Whatever... but she kept it up for a while and had Nibbles on the run.

Helpfully I called, "Run, Nibbles, Run!" And then I went on about my business.

Normally if they ever get too rambunctious I  just give them a common enemy - I bring the dog in to settle them down.  But the dog was gated in on the deck so I figured I'd just let them goats work it out.

So then came the part of the show where everyone has to go into the goat house.  The goats were still at it - chasing each other and running all around. I was getting the water buckets ready and then here comes Debbie, head down, ridge high... right. For. Me.

Now the last time she did this I just spread out my arms wide, puffed myself up as big as I could...and said something like, "Take a swing mutha-what-did-she-say!"...and Deb just sidled off....

But this time... She was tossing her head and kicking.... Still coming right at me.  So I took evasive action.

I threw a bucket of water on her.

“I could do this all day. Who's next?” I said glaring at them all because I did, in fact, have more buckets.

From behind me, up on the deck, I heard cheering from the dogs and Kai begging me to let her "help" with them frothy goats. As our star hunter, Kai is just waiting for the day that she can release her inner wolf and pull down one of them meat bags.. I mean.. goats. Which is why, of course, she doesn't come in the goat yard. "Paaaahhhlllleeeeeeeeeeeeeeeeeeeeeese, Momma, let me help!" Kai was practically yipping at that point. Titan, my big shepherd and right hand man, mumbled that I should have let him come in with me... which was true especially how Debbie had been acting.

Standing there dripping wet Debbie shook like a dog then looked at me again. I brandished another bucket and yelled, "You want a fresh one?"

Then there was that moment of truth where either you are or you are not in control of the situation.  We stared each other down... me, Cool Hand Luke daring her to make her move... her, crazy goat unable to decide her fate .....I raised an eyebrow....

...and she turned and ran directly into the goat house.

The full moon, the change of season, and our change of weather all happened together. So who knows whats going to happen today. I'm just glad that the Moon of the BatSh*t Crazy Goats is over and we can go on with what is normal for us.

As for the breeding, so far we think that Nibbles has been bred. I locked Too Short and Dahia in the stall together last nite. So either they've killed each other or "worked it out." Debbie should come in to heat later in the week - so that will be interesting. Hopefully they will all knock off the funny business. Until then I'm going to be stepping lively and keeping the buckets, and the dog, close.

How about you? Did everyone survive the full moon?

Happy Wednesday everyone!
Posted by Ohiofarmgirl at 9:40 AM

Your story sounds like one from the Okay Coral :o) and a busy one at that...don't take no stuff off them there goats girl ..show them who's boss and toting the buckets :o)

It sounds like you had quite a day! A bucket of water works well on humans too! Yep, everyone around here including "The Italian" behaved themselves!

You crack me UP! I tell you what...If I EVER see you with a bucket, your arms spread wide and your "Just try me, Mother @*!&er" I'm gonna do whatever you want me too! And I'll have a smile on my face doing it!

When it's a full moon, my goat gets very calm, almost so calm that he looks like he's just going to sleep wherever he is. My cat, however, goes completely and utterly ape crap on and about everything.

You're just right Ginny, I'm not taking any guff from those silly goats!

Autumn.. The Insane Cat Posse has been out of their minds, believe me. I wish my goaties would get all calm.. sheesh!

Makes me want to run right out and get livestock! or not. I'll think I'll start with chickens.

Dave - don't worry the hens will be just as nutty.. hee hee hee

Seems on Wednesday our oldest doeling, Elanor (aka Ellie) tried the same thing on Mom. (she is the daughter of our current herd queen, spoiled and the perfect mix of meat and milk goat. Namely BIG)

Mom bopped her with a rubber feed dish and told her that no matter how pretty she was, keep that up and she'd be first in the freezer (ahead of the bucklings). Mom said she had touched her back.

Must've been the full moon. But Ellie is a brat.