The Best Chocolate Pie EVER

The other day I had lunch with my two favorite kids in the whole world. It was a great day - and there was pie. Chocolate meringue pie is a staple at all my favorite fried chicken buffets around here. We call it chocolate cream pie - but the topping isn't cream, its meringue. Having chocolate pie for lunch with my pals kinda gave me a taste for it. So I made some. Behold... The Best Chocolate Pie EVER... 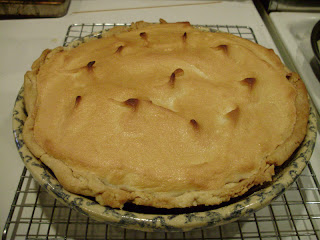 It's easy to make. First go and make yourself a lard-n-butter crust and pre-bake it.

Then run right over to Cheeseslave and check out her custard recipe.....I stopped following her directions at step #8 for the filling. I just poured that chocolate custard directly into the baked crust. The crust was still a little warm, and the custard was still hot,  but that was fine.

Then I used the egg whites from making the custard and beat them into a frothy frenzy and beautiful puffy goodness. You can see how the Mennonite Girls make it here. Plop that silky meringue on the custard and pop it into the oven for 7 minutes at 400*... or until the peaks get just a touch brown.

Then there's all that business about letting it cool. Just so's ya know, that's more of a guideline than a rule. You can always eat it with a spoon. Don't ask me how I know this.  But that might explain why there is not a glamor shot of a piece of this particular pie. That's all I'm sayin.'

A couple things I'd do differently next time (possibly later today)....

* I thought the crust was  baked a bit too long. But my hubby liked it. So I'll blind bake the crust again for about the same amount of time or just a touch less - so maybe 20 minutes?

* I didn't think it needed any of the sugar that Cheeseslave added so I'll skip it next time. 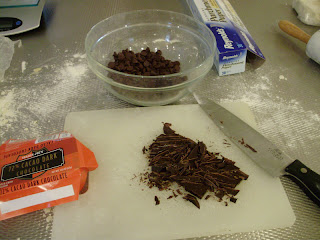 * I'll also make adjustments to the chocolate. I used about an ounce of 72% dark chocolate and 6 ounces of chocolate chips (semi-sweet). I thought it was a bit sweet so I'll add more dark chocolate. Maybe 3.5 oz of  each?

* I'll make more meringue for a fluffier topping. I only used 4 eggs in this custard and one of them was a duck egg with barely any white. So next time I'll use about 5 egg whites (from chicken eggs) so I'll have more topping. I used 4 eggs in this custard, instead of Cheeseslaves's six, because that's what I had on the counter and I was too lazy to walk out to get more from under the hens. Its also more along the same ratio of the custard recipe that my grandma used.

This pie was stunning and we just loved it. And it was better once it cooled..but you know how that goes.

Now that I've been talking about it - I think I need to run right out and get another one of these chocolate pies going.

Posted by Ohiofarmgirl at 9:55 AM

Holy cow!!! *drool* I may have to try that in my little single size pie dish (or I'll eat the whole thing.) Is that a Roseville pie plate??? Love it! I have a bunch of the single sizes and they are wonderful to bake in.

I started my diet (again) today, so thanks for the temptation, Satan. :)

Oh my, this pie is going to kill me! Made it last night, and wasn't sure I'd be able to make it through an entire piece, and I have a pretty infinite sweet tooth/love of all things rich and decadent. This is a wonderful creation, I (and my family, to be honest), owe you many thanks for this!

Thanks edh! Isnt it amazing!? I think its better the next day. Enjoy!
:-)