I'm not afraid of snakes. That isn't to say that I love them or want them touching me... I'm just sayin' they don't freak me out. My favorite thing to do when I find a snake in the garden is to call the dogs over to see the "stick" and then wow!.... Its all four paws off the ground when the "stick" moves. Ha! 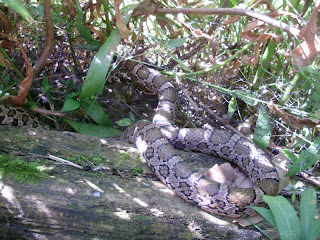 So I was more concerned then scared when The Big Man ambled over yesterday morning, while I was milking Nibbles, and informed me that we had a situation. He said there was a black mamba snake stuck in some netting on on the fenceline. So of course I went running over to see. I could have lived three lifetimes and never seen it. But there it was.  I probably walked past it a dozen times.

So maybe it wasn't a black mamba... but it wasn't a normal garden snake either. So TBM set off running to look up just what kind of snake we were dealing with on the Wiki. He came back 84% certain that it was either a copperhead....or just a regular old milk snake which is exactly what we needed seeing as how they kill rats. 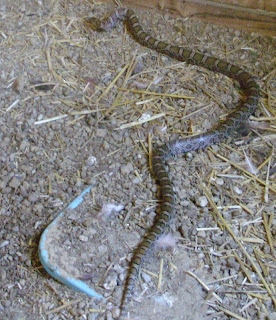 Accepting the odds I reached down to pick up the snake but was harshly told that safety equipment was necessary first. So we used beekeepers gloves. It was either that or oven mitts.

We've had other snakes get caught in the netting before. Friend, you do not know the full meaning of the word "gruesome" until you've seen what several dozen carnivorous ducklings will do to a snake caught in the fence. It will give you nightmares and set you to drinkin' for sure.

Unfortunately our snake was really tangled up. Fortunately we were able to hold the business end of that snake tight while we clipped him out of the netting. Just a couple snips and voila! Bob's your uncle and the sneaky snake was freed. So we put him in the turkey house where the worst of the rat offenders hang out.

Near as we can tell either we set a copperhead loose on our most valuable poultry... or we'll be free and clear of rats in no time flat. Thanks to our new pal, Hal.

That's the long and short of it here. Anybody else have a Wild Kingdom moment this week?  And does anyone know what kind of snake this really is?

That is one beautiful Rat Snake! GOOD FIND!
http://www.fcps.edu/islandcreekes/ecology/Reptiles/Black%20Rat%20Snake/juvblkratsnake1m1.jpg

We have a little garter snake in our yard. I had to fish the darn thing out of the pond yesterday. The water level had dropped just enough so she got stuck. Still need to name her though since I welcome helpful critters in my tiny yard. I have a pretty diverse ecosystem goin' on! :D

Hm. I googled "snakes native to Ohio" and found a site that listed them. Looks to me like an Eastern Milk Snake. If you google image that, there's a pic on the first page that matches the markings.

That's no copperhead! We have plenty down here in KY. That is a good "rodent getter." Good find!

Rat snake alright or milk snake depending what part of the country your from. Not only will that eat rats, they eat chicken eggs, and baby chicks. I had two a couple of years ago. They ate my eggs and a whole hatching of chicks except one which I had to lock up with the mother every night. The largest one even ate one of my nest egg. I know because I got my egg back. They Will Bite.

My autistic son who is seven just walked by and said "wow - cool eastern milk snake" so i googled it and sure enough. We love to read you site. I say we b/c he always seems to know when i am on here. He cracked up when you used the term Creepy Meats and is seriously wanting one of your dogs. We are suburban homesteaders who live vicariously through those that have real land and animals so thank you for sharing all that you do.

Glad it's a rat snake! It looks pretty big!

Thanks, HDA!, thats exactly the one!

Great work with the wild kingdom in your yard, Linda! We have "real" water snakes.. I'm pretty sure they are black mambas..

Thanks Rae! I figured out they are "milks" snakes b/c they are welcome in dairy barns to get all the rats.

SFG - whew! Glad its not a poison/venomous one!

S&E - ha! I'm so glad you got your egg back! Thats the way to get 'er done. Great to see you here :-) And thanks for confirming that they will go after chicks. We dont have any babies in that building and good to know for the future.

Lisa, this is the nicest comment I've gotten in a while. THANK YOU And what a great kid! Give him hugs from us and the dogs. Sounds like he'll be a good 'farm intern' one day :-)

Ann, I'd be afraid if I looked that snake in the eye that one of us would end up charmed! ha! *OFG walks into the ER with a snake hanging off her nose....*

Isnt that crazy, Dave? I didnt think it was that big until it stretched all the way out. Zoikes!