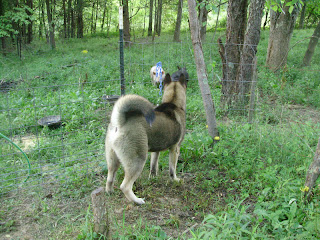 He really hates them pigz.

You might have guessed that the pork invasion has begun. Check out these little beauties.... 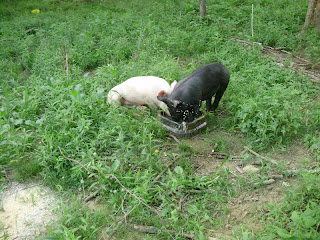 These little piggies fell straight from heaven and were too good to pass up. We are still hoping for our Tamworths, tho, which were delayed. But you know what they say...... when a pork opportunity knocks.. you gotta snatch them up, whack together a paddock, and start feeding them as soon as you can!

More on this and our hog strategy later but I gotta run right outside. Our extreme July-like weather finally broke and I need to get back to planting. I'm hoping we will actually get some rain this week. I've been running the sprinklers trying to keep everything alive. Isnt that crazy? I think I only had to water the gardens once last year and now... well, we sure could use some relief.

So Zander and I are gonna go out and do some kind of rain dance... and then do some pig hatin'. You should hear him - his growl shakes the trees and his woof strikes dread into the hearts of these little porkers. And his tail curls tighter when he sees them - its just hilarious! 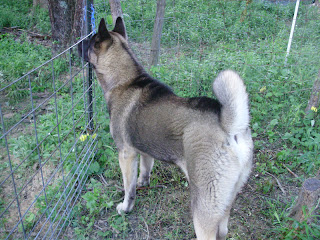 Happy Wednesday everyone! Got your pig hate on? Come on, bacon!
Posted by Ohiofarmgirl at 7:16 AM

Yikes! Hope y'all get some water soon! Good luck with your future bacon--yummy yum!

too dry up here too. Finally some rain and cool today. The puppy looks uh, regal.