We had a bean-er-ific day recently. I took up this nice basket of Italian green beans. 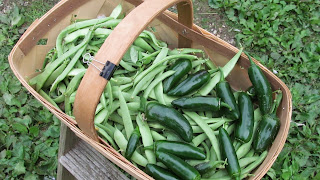 This is just the first batch of beans from this small patch. I'll get another in a couple days or so. And for the persnickety folks who are thinking that peck basket isn't too full - I also took up a huge colander full of beans so it was well over a peck of beans.

I never understand it when folks say that it doesn't make "cents" to plant a garden or that it's too much work. This small row yielded a big bucket of potatoes and all these nice beans and it only cost me a couple bucks and a little bit of my time. How could that not be worth it? 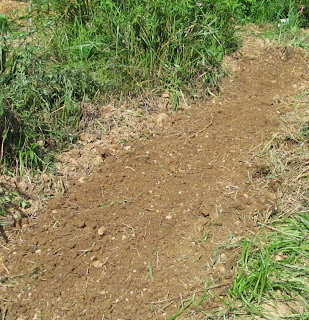 I dug this small patch - probably just 12 feet long and 3 feet wide - out of a weed field that I'm desperately trying to get under control. Initially I planted potatoes on April 23. This batch was part of the 50# bag I got for just $17. I probably planted about $1 worth of seed potatoes. Since I planted them so early I actually trenched these - but remember you can pretty much just throw them on the ground like I did here. After I planted them I mulched them really well with clean straw. I think I spent about 15 minutes on this row in total. I did absolutely nothing to them after that - no sprinkling or weeding. I just let them grow. Come to think of it, I might have picked a few potato bugs off of them but that was it.

Fast forward and I took up a spectacular amount of potatoes - that was on July 27th. And because I dug the taters I also had tilled up that little patch. The straw was a little mulched down and had actually improved the soil a bit. I used the mulch around my tomatoes. I quickly ran the tiller down this little row and planted some beans. 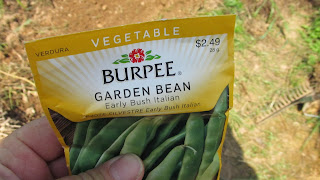 While the potato digging took a little bit of time - I dug them over 2 days because there were so many - the seed planting activity probably took another 15 minutes (including tilling). My notes show that the beans seeds costs $2.49 - but I never pay full price so I probably got them on sale... especially so late in the season. I think I used the hoe to get rid of the weeds 3 or 4 times which only took a minute or so each.

Jump ahead to the other day and that spectacular basket of beans. The best part - I probably have at least another basket out there that are just about to come on.

If this was your only garden project - a little 12 foot row and less than an hour of actual work - don't you think it would be worth it? I easily got $15 (maybe more?) or worth of food for about $3. Nope it wouldn't feed you entirely if that was your only garden grown food  - but it would put some pretty good suppers on the table. Now what if you had 3 or 4 of those 12 foot rows? Now you can see how those gardening saving start adding up.

Think about it this way - that's food that you control. You don't have to rely on anyone else to get it - what's the value of that? It's totally worth it to me. Next year this little patch is going to do even better. The soil has been improved, my hard clay has been broken up, and the nitrogen will be fixed thanks to the beans.... and I'll be mulching that little row with all kinds of leaves and barn litter. I'll be able to plant tomatoes or pepper there next summer and they will grow like the dickens.

Are you wondering how to get started? Now is a great time to get to work. Run right out and find newspapers or cardboard and lay them out in a little 12 foot row somewhere that gets a lot of sun. Next, start raking up all the leaves and yard clippings and pile them on top of the cardboard. Keep doing this and soon you'll have a little mulch pile. Next spring just rake back that mulch pile, dig a little trench, plant some potatoes, and mulch them really well with clean straw and you are on your way to gardening greatness!

Happy Fall everyone! Are you loving this cool weather?

Posted by Ohiofarmgirl at 9:18 AM

You also know what's going into the crop. No pesticides! No residual chemicals etc!

What you say is so right! I love that attitude. And anyway, even if growing veg didn't pay for itself, you have to consider the other benefits - including the satisfaction and enjoyment that gardening provides (not to mention the fresh air!)

Great advise on getting a garden started, love your blog.

I have been wondering what a peck was.... anyway, great post and I especially like your point about being in control of the food. Also I find that I plant things that I would never ever buy, like kale and silverbeet, and raspberries, and completely strange things that you can't buy at all like jeruselum artichokes and spaghetti squash. Also you forgot that gardening is fun and you don't have to pay gym fees if you spend a few hours digging potatoes instead :) I can't believe people who "don't have time" or "it doesn't work out any cheaper" to garden. I think you just proved them wrong.

I agree about the savings, but I think more importantly (to me at least) is the knowledge of where the food came from.

I was thinking about this post yesterday morning as I was picking beans. I got a bushel of beans off of 2 rows. Got 3 more to do. Praise the Lord, as the bean crop earlier was a bust. You are so right. I am getting way more than the price of the bean seed. And we really don't have tons of time in them. Great post!

Yep Ian.. exactly. With all the crazy food stuff going on I like that I know exactly where my food came from.

Thanks Mark! And yep there are a tons of benefits.. I just can't understand people who think the math doens't 'add up.'

Thanks Horst! Always great so see you!

We have some funny measurements here, Liz. There are some great heritage vegs that you just cant find in the stores. Also the produce in the groceries around here is terrible.

Exactly, Dave, but the math always works for me.

Thanks Ann! I think folks just overestimate how much "work" it is... it always pays off for me. Easy peasy! And yes! Praise God for a full harvest! :-)