Goat on a Rope.

The other day I walked out and looked into the goat yard. The little ones, Darla and Daisy, were out there screwing around. It occurred to me that maybe I should start training them to be milkers. 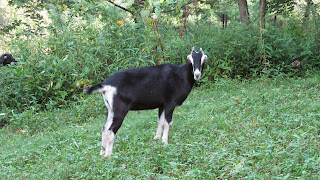 Daisy, annoying little goat. Figured out to get on the stand. She can stay.

At that moment Daisy did a double back flip off a chair, hit the ground rolling, hopped up, parkour'd off the side of the goat house, and disappeared down the hill. Humm... I thought, this could be challenging.

One of the reason many people bottle feed baby goats is because they think the goats will end up more socialized. I don't have time for that. I generally rely on my well proven, oft used, Klingon Management Techniques. Strength and honor always work.

The goal was to get ahold of one of the little goats, put a leash on her, walk her calmly to the milkstand, and let her eat some bagged food while she gets used to me petting her. It should be noted that the last time I touched either of the little goats was when I toweled them off after they were born.

"Come here, goat." I commanded and approached the little goat with leash in hand. She ran. She was fast. I was faster and I got her. Step one - check.  It was Daisy - the Dahlia mini-me. I don't particularly like her. But check - step two: leash applied. Now all's I had to do was walk her calmly to the milk stand. I started walking, confidently.

You know how they say "that stubborn old goat?"  Yeah. Well. The younger ones are pretty stubborn too.

The screaming was horrendous. It was like I poured boiling oil over her. She was bawling and not walking. I turned around to see her with her little legs braced and her little tongue hanging out, screaming to beat the band.

"Come on, goat!" I commanded. Surely small goats would respond to authority. I drug her down to the gate and hauled her carcass out of the goat yard. 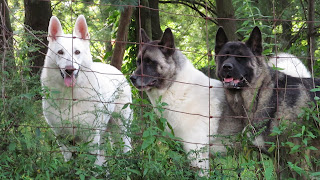 Dogs. Really want to get my goat.

In the meantime, the dogs thought this was the best thing they had every seen. Little goats run like prey and the dogs, all of them, want in on some of that action. And here I was, their momma, bringing them a goat on a rope. They wouldn't even have to chase her. The dogs all lined up along the dog yard fence, tongues lolling out, and tails wagging. They couldn't believe their luck. They loved me so much. Today was going to be the day they were gonna get my goat!

"Knock it off! All of you!" I scolded. They seemed confused.. what about the goat, obviously in the throes of death behind me?

Then to Daisy, "Look little goat, you are going to calmly walk with me to the milkstand. Let's go."  I started walking.

It was like trying to fly a broken kite.

She flipped. She flopped. She jerked and hopped. Seeing escape was not an option she chose the only other action available. She violently threw herself flat out on the ground, all four legs sprawled straight out. The dogs went wild.

As for me.... I did not turn around and make little booboo noises at her. I would not encourage these shenanigans. So I did not say "Oh little bitsywitsy goatsy woatsy come on now, let's go!" in a baby talk voice. Nope.

Eventually we made it to the milk stand. I had to haul her up and get her positioned... and then... and then..... She realized that there was food. The heavens opened and angels started singing... Daisy realized this was where the yums could be found. She carefully ate each bite. And now for the next step - get her used to being handled.

I patted her awkwardly because let's face it. I'm not a goat snuggler. But I decided to make the best of it so I sang the Soft Kitty Song. It didn't really help.

When she was mostly done with the feed I unhooked Daisy from the stand and started back down that long 20 feet to the goat yard. More flipping, more flopping, more bawling, and various and sundry antics. I didn't stop walking until we got to the gate. When Daisy was free of the leash she ran for Grandma Debbie for comfort.

"Who's next?" I asked. All the goats scattered.

This continued for a couple days..... Me out there running down a small goat, capturing her with leash in hand, and dragging her up on the stand to the howling delights of the Dog Horde. But then something amazing happened. The penny finally dropped and the little goats realized that if they just walked along with me not only would they get the bagged feed.... they could get there faster by cooperating.

Daisy actually picked it up first. She appears to be the most motivated by food so its not really a surprise. Now I just go and easily get a hold of her, loop the leash around her neck and she calmly trots along side me then hops up on the stand like a pro. I give her pats, scratches, and belly rubs. This is all part of milker-to-be training. Give it another week or two and I'll only have to go to the gate, call them by name, and the appointed goat will trot right over.

I can't tell you how many goat people tell me this won't - and can't - possibly work. Lean in friend, it always works. Here's the thing.... goats really really love food. If she had thumbs I could train Dahli to drive the truck down to the feedstore for a handful of corn. I'm not even kidding.

Now that the little goats have figured out I am The Keeper of the Yums they have decided that I'm all kinds of fun. They come running over to me and are eager for me to give them pats. Do they love my rendition of Soft Kitty? Nope. They just want food. That's fine with me. I told you... strength and honor always work... or you know.... food.

Happy Friday everyone! Do you have a goat on a rope?


Editor's note: Hey, thanks for all the shares... come on over to 'the facebook' and tell me where you are from and do you employ Klingon Management Techniques with your crazy goats?
Posted by Ohiofarmgirl at 6:00 AM

No, we have a cow on a rope. Much bigger. More trouble. Am winning the battle, but slowly!

Oh My Gosh! This has to be the funniest goat story EVER. I laughed till I had tears in my eyes. Shoot, I'm still chuckling. Thanks for sharing.

That's how I taught my goats to milk. Heck! That's why they all love to get their feet trimmed too! It's always about the food.

Thanks for a good laugh this morning!

boy howdy do you paint a picture!

ROFL, too funny! Goddess of the yum yums :)

Training goats is always...ummm...interesting. I just love when they FINALLY realize...it's a good thing. :) Way to go!!

Once again we're leading parallel lives! I'm training my two doelings to walk on a lead and to get used to being handled. It goes better everyday and like you I haven't handled them since birth. They'll end up as affectionate well-socialized ladies by the time they're done. It always works!

Simply hilarious, and true. Thank you so much for sharing.

I love to see the penny drop when the animals finally realise that we are trying to do something for their own good! We use white buckets, all the cattle know that their feed comes out to them in a white bucket, if we walk somewhere with a white bucket they will follow us, to another paddock or into the milking bales, even the babies after they are a few months old, because there's no way I can get a leash on a cow :)

I don't unfortunately have a milking stand YET (it's on hubby's build list) so when my Big Mama had mastitis and couldn't nurse her baby, I had to use a dog collar and leash and clip her to the fence so I could milk her. She finally realized that she would be handsomely rewarded with a bucket of food, and an epsom salts massage! I want my goat stand so bad I could just spit!

I had to put a dog collar and leash on my Big Mama when she got mastitis and couldn't nurse her baby. She finally realized that she was going to be rewarded with a bucket of food and a warm epsom salt massage after I milked her! I want a goat stand so bad I could just spit. It's on hubby's "To Make" list (my fault, I keep adding to it!).