I scored another bushel of green beans earlier in the week from an Amish neighbor. I was thrilled to find out they still had some available. I need to get canning. 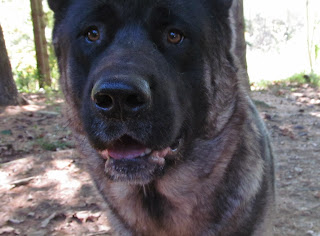 My eye level view of Zander. When I sit in this chair he looks me in the eye.

What about all these lovely beans? They are doing great but I need more more more. Unfortunately some of the beans I planted earlier in the summer didn't work out. Why not? One word: Tenderette. I just don't like them. I tried the Tenderette variety but they just aren't as good as the good old Blue Lake variety.  So the turkeys got the Tenderette beans and my soil was improved so it all ended well.


What bean snapping looks like around here. Filled with big dogs.

The worst thing about canning beans is snapping off the ends. It's not hard it just takes some time. Fortunately I have some very good helpers. 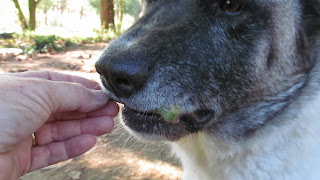 Kai kept pestering me until I gave her a bean.

Zander and Kai are naturally very curious and are interested in everything. Bubby likes to put his big head in everything I'm doing. Kai just kind of noses around and sneakily gets involved. They thought the beans were amazing. 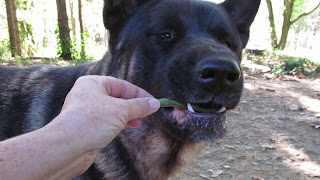 Zander always takes things from me very gently. Look at those chompers tho!

I finally gave up and let them have some. They didn't want to eat the beans, just wanted wanted to chew on them. It was pretty hilarious. 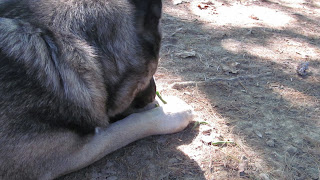 Then he just chewed it apart.

I love how they use their paws for everything - they are very cat-like. Of course, they take anything I offer them very gently. For as powerful as they are both Kai and Zander are remarkably "soft mouthed." 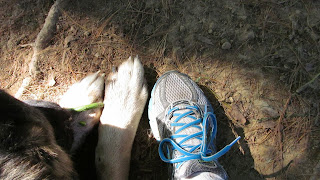 Look how big Zander's paws are! He could wear my shoes.

My #1 Dog only wanted me to throw a stick for him and he couldn't have cared less about the beans. I finally gave him one. The look of betrayal was epic. Titan is not a vegetarian and that bean was not meat or a stick. So he spit it out and went back to trotting around with a real stick and thinking Kai and Zander were ridiculous. 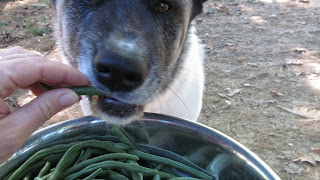 My beautiful Kai, amazed by beans.

I love having good helpers, don't you?

Happy Thursday everyone! That snap snap snap sound you hear is me working on another half bushel of beans!

Posted by Ohiofarmgirl at 8:22 AM

A friend had an old dog that had digestive problems and the vet prescribed canned green beans for it. Seems that dogs like green beans and it is good for them. So much for the dog food on TV that bad mouths vegetables and grains in dog food.

The min. my 'girls' (border collies) hear the snap, they're johnny on the spot. They love green beans so much that I have to keep the garden gate closed or lose the bean crop. The pea crop from last year was a gonner after Dear Sweet Hubby left the gate open. He was the one in the dog house that night! Love the pics of the bubbies.

You should be glad that they are not vegetarian - I swear I have a cow instead of a dog. And I can't leave anything in buckets to take care of tomorrow in the house. She LOVES green beans; apples disappear to be eaten behind the couch; plums are yummy except for the pit; tomoatoes - eh.

You have some wonderful dogs there, they are just so respectful.

It's nice to have helpers. I have been canning our carrots, and during the peeling and trimming stage all of our three dogs were at my feet. They didn't eat the carrots though, just chewed them up into little bits. Not to worry, it kept them amused! Happy canning!

what a fun post to wake up too! I thought they were eating it, chew toy makes more sense.

Been canning beans here like crazy! Our beans this year did horrible so we planted late beans. Like 2 1/2 pounds of them! We planted Roma, half runners and blue lake. Hoped some of them would do well.
It has worked out amazingly well. The bugs did not eat them hardly at all. It is very pleasant on a cold morning to pick beans.
So far: 18 quarts of Roma, 14+ of blue lakes plus ate huge pot for supper twice. (includes feeding teenage boys) half runners will be picked early next week. I am pleased!