The porkers are doing GREAT. Remember this three-pack from just over a month ago? They look very delicious and are very happy. 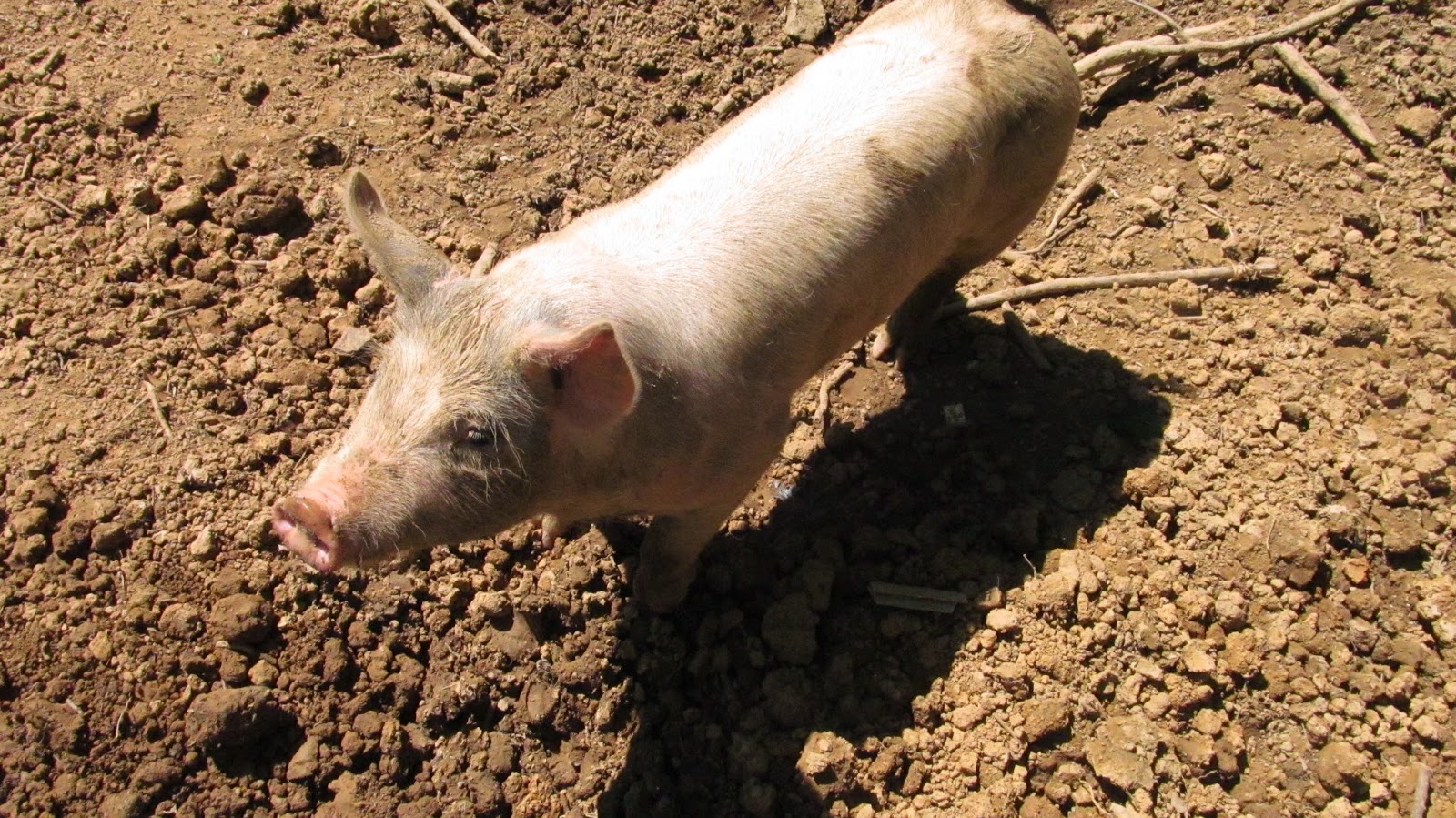 During the heat I make sure that their wallow is full and that they have plenty of water. They think the hose is amazing. Remember, tho, not to "shock" your pigz with too cold water lest they flop over dead. Seriously. It's a thing. We've never had a problem but I know someone who did. Mostly I just give them a little sprinkle and let them play in the water as they'd like. 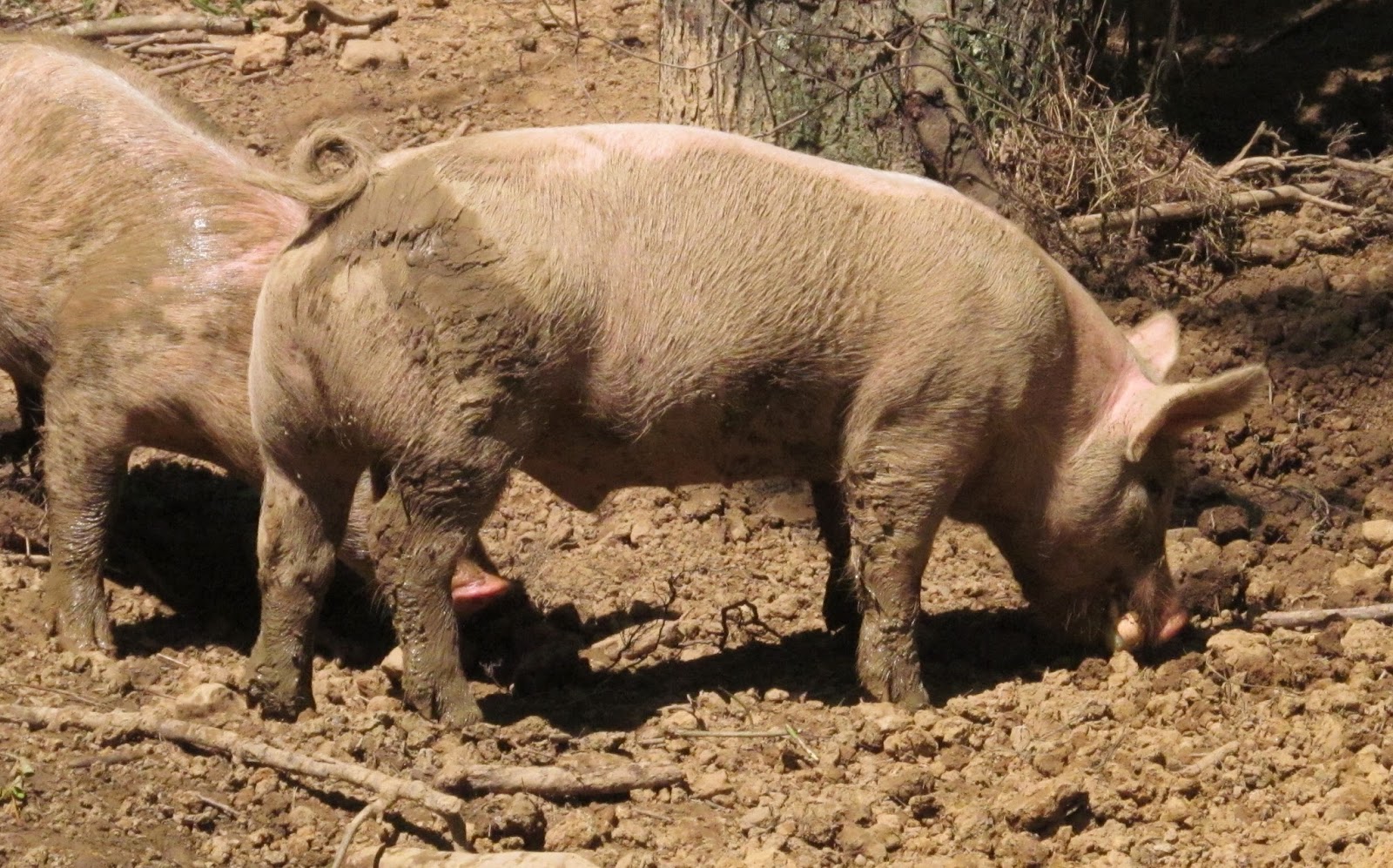 Look at those hams!

They had a special treat yesterday - frozen hard boiled eggs. Kind of like egg-popsicle. They were very excited and thought it was terrific. 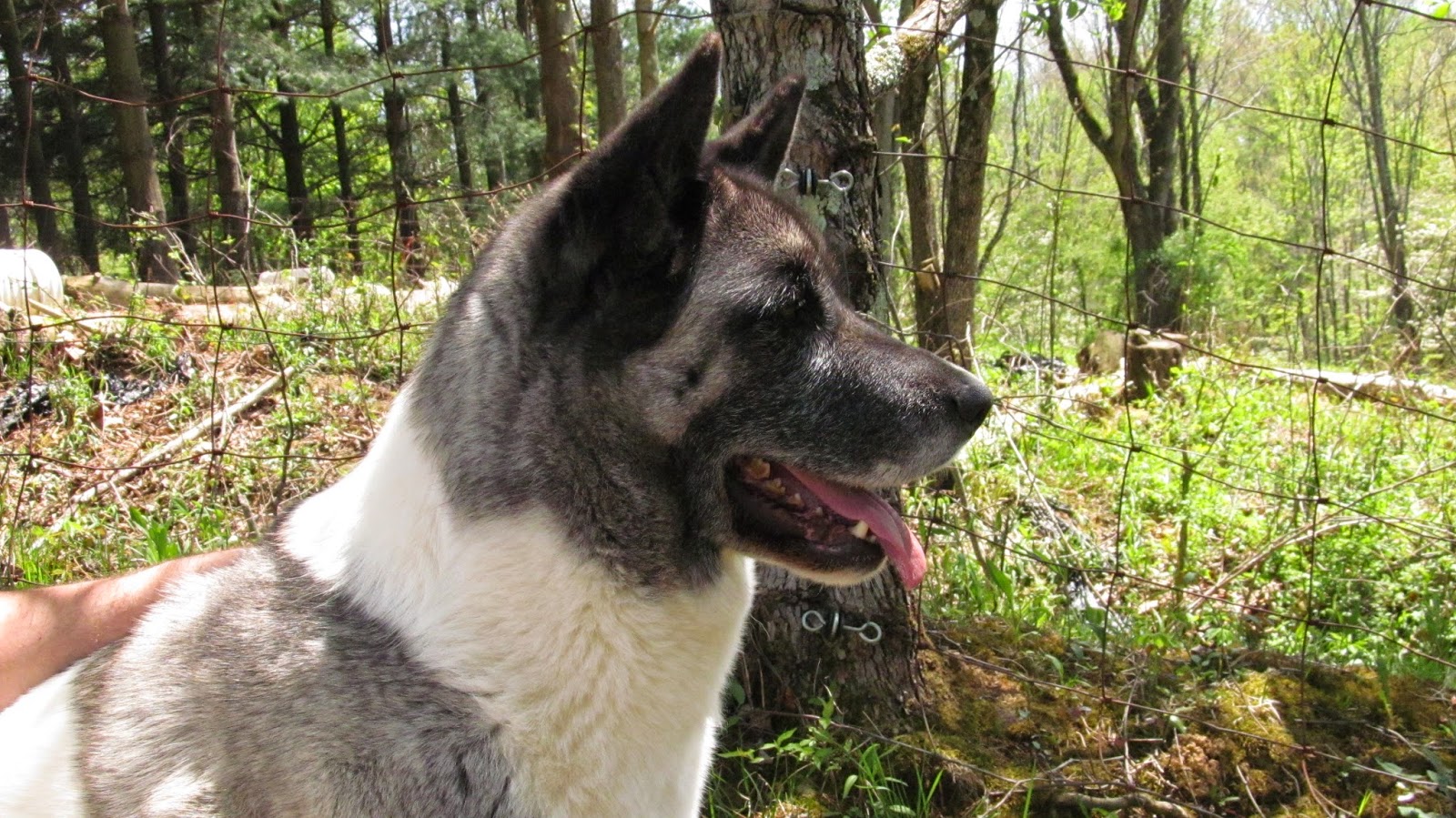 Kai, does not want to be friends with the pigz.

The big story, however, is that our Kai has started to come with me into the pig yard. This is huge and is a big step for her. She and Zander will never be the same kind of hard workin' farm dogs as Titan... but they have their place. Mostly she is the muscle and my best hunter. Coming with me into the pig yard is helping her learn, "Guard momma" which is one of my favorite commands. She is taking her queues from my Dog#1 and also from her strong natural instincts to protect her human.

You'll remember that there is always a point where I do not want to go into the pig yard. We are rapidly approaching that point. So I need some good helpers. 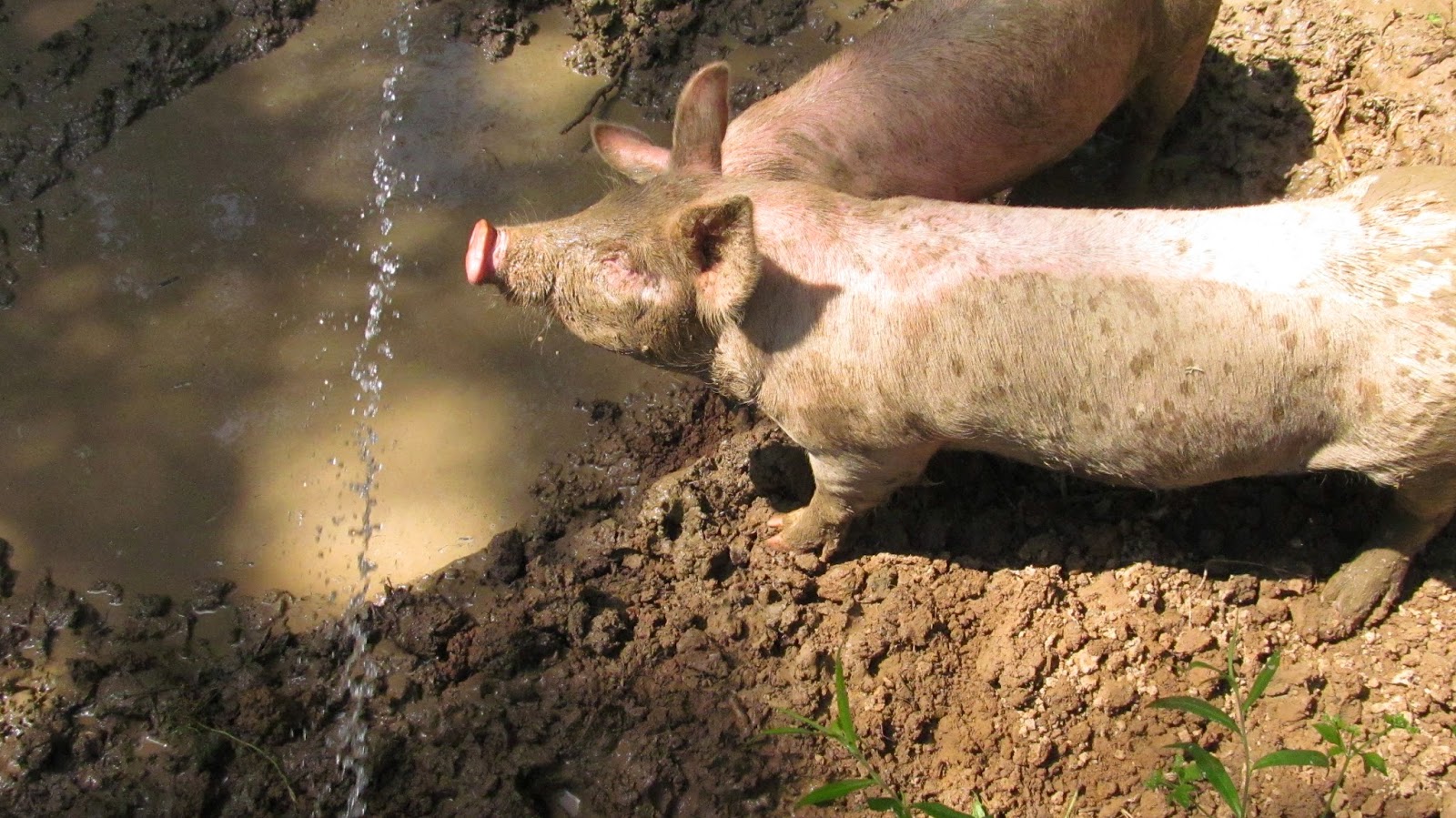 I let the pigz decide if they want to play in the water or just be amazed by it.

The first day she came with me I just let the pig yard gate open and called her in. I knew the pigz were more interested in me and the feed bucket so they wouldn't run out. This let Kai come in at her own speed. My #1 was busy pacing behind me - allowing me to face the pigz with the feed but his working stance kept them from plowing over me.

While I was feeding them one of the pigz trotted right up to Kai all happy and excited to meet someone new. He sallied right up as if to say, "Hi! Will you be my friend?"

Kai did not want to be his friend.

Showing great restraint she immediately got into her hunting stance (mane and ridge up, chest out, tail curled tighter...), showed her teeth, and when that porker didn't back off she gave him a warning bark which sent him running.

The big thing is that she did NOT run off after the pig or lose her mind and run him down... and she held her ground.  All this happened while I was well out of reach. This tells me that she is starting to make really good decisions and has really developed her self control. I also really like her boldness.

If I tried this with Zander we would be having pork chops for dinner tonite. Zander is very aggressive with the pigz - not that it's a bad thing. We just need him to get over his "puppy brain" to the point where I can work with him. This is just a maturity thing and I don't doubt he will be able to do this same thing very soon. He's already making great strides and is extremely obedient even in the face of flapping chickens and running ducks.

My next training task will be to try and direct Kai - like I do with my Dog#1. By pointing and commanding him I can position him between me and the pigz... and also have him herd the pigz where I want them to go. We'll be moving the pigz into a new pasture soon so having two big burly dogs help me herd the pigz will be a tremendous help.

This also gives me a lot of confidence in working with the pigz. My husband has a new work schedule so I almost always have chores by myself. So being able to take Kai and my Dog#1 into the pig yard is really important to me...not only for my safety but it just makes things so much easier. While its hilarious to have a smallish pig run between your legs or bump into you - having a 250 pound porker do the same is dangerous and not funny at all.

Happy Wednesday everyone! Do your dogs work with you? Are your pigz happy to see you?

Posted by Ohiofarmgirl at 7:41 AM

I am impressed with the training you have done with your dogs. Our two rottweiller girls are getting better as well, and will stop in their tracks when called. I was thinking that it might be a good idea to go into the sheep field for an hour in the afternoons, just so that they can get used to be around them without wanting to chase. The same for the goats and cows.

We are expecting piglets in a month or so. Hooray!!! Nice to know that pork is on its way!!!