It's winter now. For a day.

Not that I'm entirely complaining... but I do need to note this for my records that The Year We Were Winter-Free is progressing along nicely. 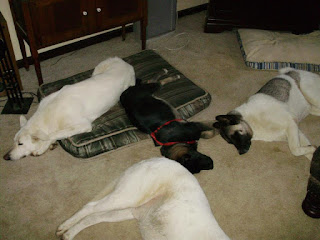 Unrelated pic: this popped up on 'the facebook' the other day. My Bubby was so little! Now there is no "empty" space on the floor when they are all in here. It is entirely covered in big ol' dogs. Sometimes people ask me if the house smells like cats because of The Insane Cat Posse... no. The house smells like dog a$$. Big.Dog.Toots. All damn day.

This morning it was very cold with an even colder morning on tap for tomorrow. I think it will be about 22* (that's Freedom Units and not metric for you international readers...). And then it will warm up and be in the 50* and 60* for next week. Chance of a white Christmas = zero.

Who's happy about this? The cold, I mean? Kai. No one was happier than Kai to run right out there to and run around crazily in the cold than Kai. She went wild this morning racing around in the little bit of snow we have on the ground.. And then I got mad because it was cold and we all went inside. Now Kai is mad and is making plans to travel to the Land of Snow and Ice.

Nothing. It hasn't been a great week here so there has been minimal activity. Remember my wonky hip? Yeah. I thought I had escaped the festive annual Hip Wonk but nope. I was laid low again. Then just as I was ambulatory again I made the mistake of being around people. So then I ended up sick... then hungover by the sickness cure, then a general malaise set in. So I spent most of the week watching cat videos on the interweb. Now I'm just mad and waiting for it to be 60* again.

They showed the extended forecast and it looks like the suckers on the West Coast are going to get our cold and snow and it's nothing but smooth sailing for us. I am not complaining. I'll take a temperate winter any day.

The mild weather also gives me the chance to work on some projects I've been putting off while I was waiting for winter to hit. More on that just as soon as I can get off the couch.

Happy Saturday everyone!
ps. THANK YOU to everyone who made purchases from my completely lame, entirely sensible wishlist! I can't see who orders what so I cannot thank you personally... but I'm very grateful for every click!

Posted by Ohiofarmgirl at 12:56 PM

Here in western Oregon we've got rain and nothing but rain and all of the rivers are flooding. It's the wettest Dec. ever. The mountains are getting snow and we have had landslides and roads washed out along the coast. There was even a tornado in Washington state. What is happening here? I miss our boring soggy but not that exciting weather.

that tornado was insane, PJ! but i guess everyone's water worries will be over? ugh. i'll take our sunshine but it is very very very weird.
*peeps outside at weirdness*

You need a whole bunch of snow! Shoveling will strengthen up your hip muscles and the cold will harden you up. Have you ever noticed how plants wilt and droop when not watered? Same principle! Seiously, get well and have a MERRY CHRISTMAS!

Here in southwestern Washington, it has alternated windstorms with rain and then cold snaps. Wet and muddy dog prints abound. Trees have come down to take out fencing, the chickens keep standing out in the rain, so all the goats, etc. are doing it too. Maybe it had something to do with the tree that just missed their shelters? It ticked the endmost one and pretty much crushed the supplies that were waiting to create another shelter.
Celebrating the fact that none hit the house this year......so far. Fortunately, the flooding is below us for the most part, so just have to stay home. Fingers are crossed about slides, as we are above a lake. But, hey, everything is Merry and Bright! Take it easy on the hip/backside and Happy Holidays to you!
Sherri