Yesterday I worked outside, in shorts, in the 68* sunshine. I even found some salamanders under the leaves I was raking. Weirdest Christmas Eve day ever... and best global warming. 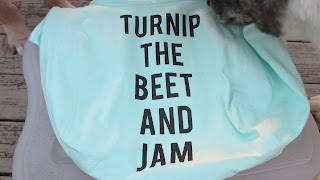 No more bag fights at the Aldi's. Kai and Zander helping me with the pic.

Add to the wild swings in barometric pressure from the thunder storms, the tons of rain, and being so close to the winter solstice.... the full moon last nite as the final straw.... the barnyard was a big loopy mess. The goats were out of control, the chickens were out of their minds, and Kai barked at everyone.

What a crazy day!

But the best thing that has happened in a good long time was that I received an early birthday present. From now on, "Turnip the beet and jam!" is my new favorite thing. It might replace "you can't beat beets!"

But best of all now I have a real bag so I don't have to get in a fight with the Aldi's anymore. I always forget a bag and then it always goes bad.

I'll have to dig up that story. Let's just say that I haven't officially been asked to stay out of the store... but you know how that goes...

Anyway. I've been talking about something over on the facebook...

If you are sitting around in big Christmas extravaganza with gift card burning a hole right in your pocket you might want to consider a book purchase by the My Sad Cat guy. Tom revealed that one of his cats, Roscoe - not the permanently sad cat but one of the "other cats" - was attacked and grievously injured by a dog. She has been under vet care for over two weeks and has endured a couple surgeries. He hasn't really talked about it but he gave this poignant update the other day. As of yesterday Roscoe was at home.

One of the great things that has happened was that someone, not Tom, reminded people that there is a donate button on his website. Because of that one statement some very generous folks helped ease the burden of the catastrophic vet bills. But if you wanted a funny book or a calendar you can know that it's going to a good cause. The cost of Roscoe's vet care will be extraordinary. (Note: these are not affiliate links so I don't get anything for talking about them - just directing you to the books.)

A lot of us know what it's like when you have a beloved pet in dire circumstances. So we are all pulling for Roscoe.

Posted by Ohiofarmgirl at 9:02 AM

I hope Roscoe gets all healed up soon. Have a wonderful Christmas.

Merriest of Christmases!!! All our best for a joyful season!! And popping over to see how we can help out Roscoe!